You are here: Home / Economics / Free Markets Solve Everything / For A Good Time On The InterTubes: Women Scientists-in-Binders [Self Aggrandizement Alert]

I’m pretty sure this crowd knows by now that I host an internet radio show once a month (one of three hosts in the (almost) weekly slot) on science and its surrounding culture.  The strand is called Virtually Speaking Science, and it’s part of the expanding Virtually Speaking empire created by Jay Ackroyd, a commenter here and a front-pager over at Atrios’ place, Eschaton.

I’ll be doing another netcast this evening, 5 p.m. EDT,nd it’s going to be a good one, I think.

To get a sense of some of the issues to be discussed, what’s notable about this picture? 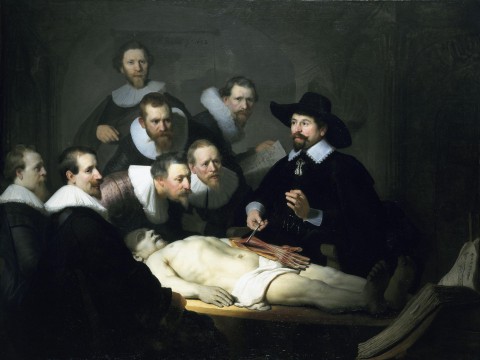 Well, lots, of course — and don’t even get me started on the bizarre misproportion of the left arm and hand [vs. the right]…*

But you may notice a certain common attribute shared by the figures depicted here — which visible evidence of the historical reality of career paths in the sciences is something my guest, Professor Nancy Hopkins, has done as much to change as any single person in the American academy.

Hopkins, an MIT colleague is both a top flight biologist (her research has focused on development and cancer and she is particularly well known for her work on zebrafish as a model for basic questions in developmental biology) — and a real hero of the drive for gender equity at MIT and really, throughout the tier 1 research university world.  As often happens with top flight researchers, she is part of a lineage of scientific inquiry that provides a glimpse of the creation story (myth?) of molecular biology — as she was trained by Jim Watson and Mark Ptashne — and the Watson connection is rich in this context.

(Just as a bit of a spoiler, we’ll probably talk a bit about Rosalind Franklin, to whom I have a family connection.  When I first met Watson, I mentioned that bit of clan history, and he blanched just a bit.  I had thought it was because the mere mention of Franklin gave him something of a shock, but I found out a little later that my older brother had met Watson just a couple of weeks before — and had walked up to him saying almost exactly the same thing…so the man Peter Medawar called Lucky Jim must have felt that the Franklin family was stalking him…;)

Hopkins managed to advance the cause of gender equity in the 02139 zip code the MIT way — confronting real barriers to her own work, she found the handful of other women faculty in the sciences similarly constrained, and then went to central administration to get support for a study.  She and her colleagues then went out and did that radical thing, collecting actual data on measurable aspects of faculty research experience: how much space, when, what kinds of support and all that.  She  and her co-workers were able to demonstrate clear and significant discrimination, and to their and the Institute’s credit, central administration responded with real measures to address the issues raised.  A report published in 2011 documents the changes within MIT [PDF], and it notes both significant change and considerable room for further progress.

By the way — just to link up with another of my recent conversations, Hopkins and her colleagues lived and have now documented the same phenomenon Ta-Nehisi Coates wrote about so powerfully in his piece “Fear of a Black President.”  Women in science have had to fight through the “twice as good” demand and constraint for a long, long time — and to a greater extent than should still obtain in this century of the fruitbat, they still do.  That’s where Hopkin’s work is now taking her, as she documents how the playing field within and around the academy is still far from level.  We will talk about that work too.

Do tune in if you have a moment, and/or pick up the podcast  (either at Blog Talk Radio  or on iTunes) within a day or two.

Oh — by the way.  No binders were harmed in the making of this post.

*completely off topic, but I found W.G. Sebald’s The Rings of Saturn to be incredibly moving — and he has a wholly strange and wonderful discussion of this painting early in the text.

Previous Post: « It was a draw, at least for the first quarter hour
Next Post: Mid-Afternoon Open Thread »