You are here: Home / Foreign Affairs / War / Turn and Face the Strain 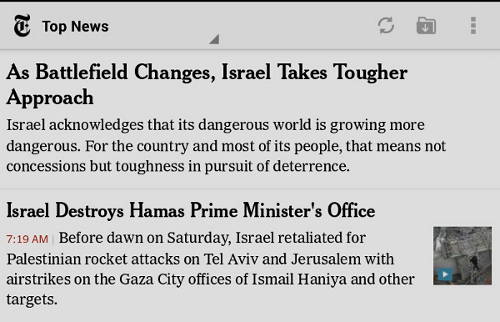 Why does the New York Times start to sound like a teenage girl’s Facebook page whenever Israel gets into its next war? “You guys, Israel has it tough. That battlefield is changing, and the world is growing more dangerous. Leave Israel alone!”

I’m no expert in the Gaza conflict, and I certainly don’t know enough to have a judgment about which side is “in the right”. But I do know that that the minute Israel is involved in any military action, every US media outlet drops the guise of skeptical reporting and goes more all-in than some Israeli newspapers. That leaves me reading the Guardian, Al-Jazeera English and Haaretz to try to at least hear what Hamas has to say, and to see a few images of the hell that’s being rained down on the other side of the fence.