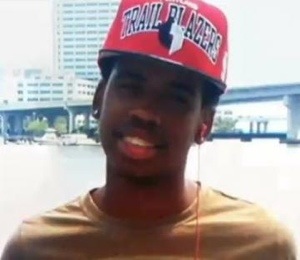 Another senseless shooting death of a young unarmed black man in Florida:

Michael Dunn, of Satellite Beach, Florida, was in Jacksonville this past weekend for his son’s wedding.

Jordan Davis, 17, and some other teens were sitting in a SUV in a parking lot when Dunn parked next to them and asked the youths to turn down their music.

Jordan Davis and Dunn argued over the music, then Dunn, who is a gun collector, pulled a gun and shot eight or nine times, hitting Jordan twice, reports the Orlando Sentinel.

Jordan Davis’ father Ron Davis said his unarmed son died in the arms of a friend in the SUV.

Dunn and his girlfriend took off, but witnesses wrote down their license plate number, according to the police.

The couple was staying in a Jacksonville hotel when they heard a news report Saturday morning about the shooting, so they drove home to Satellite Beach, Florida.

Dunn was arrested at his home on Saturday and charged with murder and attempted murder. He is being held without bail.

Because this occurred in Florida, we can expect another round of likely unfruitful discussions about the “stand your ground” laws that were at issue in the Trayvon Martin case. There will be handwringing and a public outcry, but nothing will be done, ultimately, because the ALEC-sponsored gun laws in this country are just fine, and if black kids don’t want to get shot for wearing a hoodie, or playing loud music, then that’s just too damn bad. They should stay home.

How many will be accused of “playing the race card” by pointing out that young black men are gunned down at an alarming rate in a country that likes to pretend it is post-racial because we have a black president?

Who will accuse President Obama of stoking racial hatred if, as he did in the aftermath of Trayvon Martin’s murder, Obama notes that if he had a son, that son would look like Jordan Davis?

Who will point out that black kids need to act a certain way (and their parents should give them a good talking-to about it) in order to avoid being gunned down by trigger-happy lunatics?

This is a tragedy like so many before it, and so many yet to come.

This country has a serious problem. When are we going to address it?