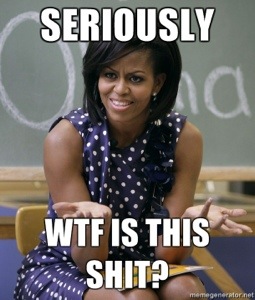 Antifeminist asshole and verbal diarrhea sufferer Charlotte Allen blames the Newtown shooting on the “feminized setting” at Sandy Hook Elementary, which encouraged “helpless passivity” and stomped on the testosterone-infused testicles of what could have been a normal more masculine elementary school.

It was probably all those super-gay potpourri sachets that teachers stashed in students’ cubby holes. If only there had been more manly men and fewer scented candles at the school, this shit never would have happened.

There was not a single adult male on the school premises when the shooting occurred. In this school of 450 students, a sizeable number of whom were undoubtedly 11- and 12-year-old boys (it was a K–6 school), all the personnel — the teachers, the principal, the assistant principal, the school psychologist, the “reading specialist” — were female. There didn’t even seem to be a male janitor to heave his bucket at Adam Lanza’s knees. Women and small children are sitting ducks for mass-murderers. The principal, Dawn Hochsprung, seemed to have performed bravely. According to reports, she activated the school’s public-address system and also lunged at Lanza, before he shot her to death. Some of the teachers managed to save all or some of their charges by rushing them into closets or bathrooms. But in general, a feminized setting is a setting in which helpless passivity is the norm. Male aggression can be a good thing, as in protecting the weak — but it has been forced out of the culture of elementary schools and the education schools that train their personnel. Think of what Sandy Hook might have been like if a couple of male teachers who had played high-school football, or even some of the huskier 12-year-old boys, had converged on Lanza.

Yes, what Sandy Hook Elementary School needed was some ex-high school football stars for teachers, and husky twelve year olds to step up and heave some goddamn buckets. Women with their lady muscles couldn’t possibly be expected to heave any buckets — or do anything besides stand around clutching their pearls and generally being useless. Never mind that Dawn Hochsprung and Mary Sherlach rushed the shooter before being killed. Forget about Victoria Soto who was shot after she lied and told the shooter that her students were in the gym. Forget about Kaitlin Roig and Abbey Clements who hid their students from the madman.

Husky twelve-year-olds and high school football has-beens is what the situation needed.

Also? Male aggression. Lots of male aggression. Elementary school ain’t for pussies, you know. Shit could get real at any moment, and you have to be prepared, son.

Hell, at the beginning of each school day, all kids should ask themselves, “Do you feel lucky, punk?” And if they don’t feel lucky — if they don’t feel masculine rage coursing through their veins, threatening to drown any sense of logic and reason in favor of impromptu ass-beatings — then maybe they should be home-schooled. Wusses.

[cross-posted at ABLC]
Previous Post: « The Newest Nuttery
Next Post: But I used a little too much force »