ETA: I notice that as I wrote this John has come up with more on Lindsay Graham’s ongoing star turn theater of the absurdly malicious.  Must be a harmonic convergence or something…

It’s getting sad, really, watching Senator Graham twist and turn as he tries to find some way of avoiding being Lugared next election.

Here he is on how to avoid the damage of the sequester:

“Here’s my belief: let’s take Obamacare and put it on the table,” he said. “If you want to look at ways to find $1.2 trillion in savings over the next decade, let’s look at Obamacare. Let’s don’t destroy the military and just cut blindly across the board.”

Here’s the Congressional Budget Office on what the budget would look like without the health care reform measure that is the signature accomplishment of President Obama’s first term:

Assuming that H.R. 6079 is enacted near the beginning of fiscal year 2013, CBO and JCT estimate that, on balance, the direct spending and revenue effects of enacting that legislation would cause a net increase in federal budget deficits of $109 billion over the 2013–2022 period. Specifically, we estimate that H.R. 6079 would reduce direct spending by $890 billion and reduce revenues by $1 trillion between 2013 and 2022, thus adding $109 billion to federal budget deficits over that period.

So forget the fact that there is exactly zero chance that the President or his party would acquiesce in this latest ham-fisted South Carolinian attempt at the nullification of duly passed federal law. Pass over in silence the fact that this kind of nonsense is exactly what is needed to continue to paint the GOP as the party of rigidity, incapable of anything other than fighting the last war… 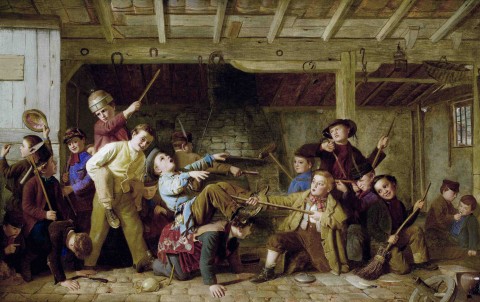 …and ignore all of the reasons that the utterance of this crap may play great on Fox News — and that such theater is exactly what (some) Republicans themselves have noticed constrains the party’s ability to speak past its dwindling core.

Instead, do what is sadly laughable in our politics today:  pay attention to the actual policy.

If you do, you’ll notice that a sitting, senior senator just proposed deficit reduction by increasing the deficit.*

That this fact doesn’t earn immediate ridicule from the mainstream media — and not just us DFH bloggers — is a pretty precise measure of how deep is the sh*t in which our polity now wallows.  To be sure, this is hardly the most risible, or most corrosive of Graham’s recent performances; nor that of the GOP at large.  But the sheer bald obviousness of the big lie here gets my goat. Does he think we’re that stupid?

*I do know that Graham’s statement could suggest something other than the repeal examined in the CBO analysis cited above.  But every GOP proposal on health care that I can recall that calls for something other than a total reversal of Obamacare makes the fiscal picture worse.  So unless and an until Sen. Graham advances a specific plan, I’ll default to the existing corpus of Republican “ideas” on the matter.

Previous Post: « The Guns and Butter Divide in One Quick Paragraph
Next Post: Greetings from a Crazy Cat Lady »