So — we know what’s coming up next in Massachusetts: Ed Markey vs. Gabriel Gomez.  Markey’s a 36 year veteran in the House; Gomez is an alledgedly “pure” non politician with all the attributes the national Republican Party wants to see — Latino, a former Seal, private-equity “job creating” vampire.

We’ve seen how this can play out even in not-as-liberal-as-our-rep Massachusetts.  Remember Senator Coakley?

There are real, big differences this time of course.  No Obamacare debate, nor teabagger summer of 2009.  We’ve seen the Republican party in its howling glory a lot in the last two and half years, and Massachusetts Democrats are profoundly committed to not watching Scott Brown II play at any multiplexes next year.  Not to mention Ed Markey isn’t Martha Coakley, for which I’m grateful indeed.  But I’m deeply mindful of what about a dozen of us heading out to canvass for Markey on Sunday heard from this guy: 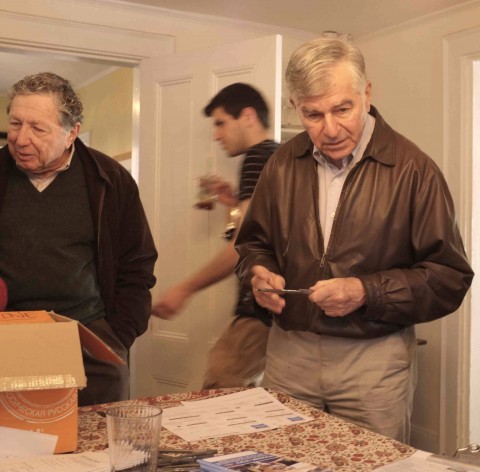 Mike Dukakis was a damn good governor, and he would have made a much better president than Bush the elder.  Dukakis is particularly admirable because, in the tradition of the good guys, he hasn’t dropped out of public life or public service just because he’s not running for anything anymore.  And boy does he know his home town.

I’d never met him before, and so after we chatted for a while, he asked me where in Brookline I live.  I’m on a truly minor one block long street which boasts a grand total of, I think, seven houses that actually have addresses on our road (we’ve got a couple more on the corners that the larger through streets claim).  I said the street name and started to explain where it was and he stopped me.  “I know them all,” he said, and I believe the man.

So what did he say?  He told us to get out and knock on every door — not just Sunday, but as much as we could before today, and then again, as much as we can, over and over again between now and June 25th, the day of the general election.  We’ve know what happens when we don’t, he reminded us — and the he said not to pay any attention to the numbers.  “I’m the guy who was 40% ahead of Ed King with five weeks to go and lost that election.”  (Quoting from memory, backed up by this interview.)

The point is obvious, right?

Ed Markey is a hard core, old fashioned liberal.  The kind of senator we need right now, in ever greater numbers.  He’s going to start out with a substantial lead.  About three times as many Democrats as Republicans voted in this primary.  Markey’s vote total alone exceeds the GOP vote for all three of their candidates.  And he can lose.  If he doesn’t campaign better than Martha Coakley did, he may well lose.  He won’t, both because I think it is actually physically impossible to do a worse job in an election than Coakley, and because he’s not stupid.  He’s not a charismatic guy at all, but he works and works and works.  Which is all good.

But there are no guarantees.

So my wife and I will be handing over a few more bucks, and we’ll be hitting the phones and knocking on doors.  The state party’s a lot smarter than it was when it let Brown blindside everyone three years ago, and the national party isn’t going to let this one slip either.  But if any of y’all are in the area, we could use your help.  Ask Mike Dukakis.  He’ll tell you.