You are here: Home / Politics / Domestic Politics / Rage Against the (ATM) Machine* 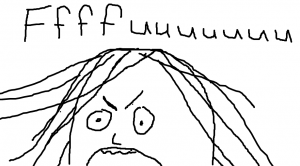 I had to run out at lunch time because there was nothing to eat in the house (well, nothing we wanted to eat), and I had a hankering for this Middle Eastern restaurant that puts some sort of addictive agent in the tabouli that makes you crave it fortnightly. My teenage daughter is flopping around the house for another month until school starts, and having never developed a tabouli addiction, she thinks a certain crappy sandwich from a crappy chain co-located with the local fuel emporium is haute cuisine and demands it weekly.

In an effort to accommodate her while also securing my tabouli fix — all within the space of half an hour so I could return home to conduct business — I hatched a plan: I would phone in my take-out order at the Middle Eastern joint, visit the drive-through ATM at the bank to obtain cash for my daughter, drop her off at the sandwich/gas station with cash so she could place her order and pay for it, swing by and pick up my lunch, then retrieve my daughter and go home to eat.

Well, of course they would be repaving the drive-through lanes at the bank, so we couldn’t just swoop through for the cash. I parked and walked up to the wall-mounted ATM outside the bank, probably for the first time in years.

There were three people ahead of me in line. We all waited a polite distance from the elderly lady who was actually at the ATM. The poor thing was clearly flummoxed by the sorcery required to get the machine to dispense money. I’m guessing she usually deals with the tellers in the drive-through bank with their quaint pneumatic tubes but was unable to access their services due to the repaving.

She inserted her card and tried to operate the touch screen from the keypad. She retrieved her card and reinserted it. She made bewildered noises and tapped her foot and randomly pressed buttons, each time ejecting and reinserting the card. Those of us in queue were willing to help, I think, but there’s an etiquette involved in ATM interactions among strangers, so we couldn’t just walk up to the secret screen, could we? I would have totally helped if she’d asked.

Tick-tock-tick-tock. Finally, I decided, awfuckit, I’d just go into the gas station/sandwich counter with the kid, pay for her damn lunch with my debit card and then go to the Middle Eastern place and pay for my tabouli with my card. So off we went. Luckily, there were only two people ahead of us at the sandwich counter. But when the woman right before us prepared to give her order, my heart sank as I saw her consult a clutch of sticky-notes affixed to separate piles of bills.

She was apparently ordering lunch for several people in her office, inspired by a combo coupon. There was much confusion around which items were actually eligible for the discount, and as she questioned the sandwich maker about it, I stifled the urge to offer to buy lunch for her entire goddamn office if she’d just make a fucking coherent fucking order already. Fuck!

When that crisis passed and the sandwiches were being assembled, the focus turned to individual preferences for sandwich toppings – preferences that struck us as insanely precise. For example, on one sandwich, mayonnaise was to be applied only to the side of the bread that was not touching cheese. On another six-inch sandwich, mustard was to be included only on a three-inch segment since two coworkers were splitting that one.

Once these instructions were carried out in precise detail and each sandwich was bagged, each had to be rung up and paid for separately, with change from every order deposited in separate compartments of the woman’s cavernous purse. In one case, a hefty percentage of the total price was to be paid in pennies, and she came up short, so she had to put that one on her personal credit card. I bet the orderer is STILL catching hell for it.

Finally, we ordered our one puny sandwich, paid and got the hell out of there. I joked to my daughter to look for the old lady at the ATM as we passed to see if she was still trying to extract money. She wasn’t at the ATM, but she was at the cash register of the Middle Eastern place, trying to figure out what to order. While we waited behind her to get our take-out, she asked the man behind the counter to explain what “kofta” is, expound on the ingredients in falafel and enlighten her on the mysteries of the rotating gyro log. Ultimately, she decided to take a menu and leave without ordering anything.

Outwardly, I was polite and impassive, but inwardly, I was seething with rage and impatience. Then I realized how stupid that was. I recalled a funny paragraph from “Cloud Atlas” from a character who experiences a forced exile from his past life:

“We — by whom I mean anyone over sixty — commit two offenses just by existing. One is Lack of Velocity. We drive too slowly, walk too slowly, talk too slowly. The world will do business with dictators, perverts, and drug barons of all stripes, but being slowed down it cannot abide. Our second offence is being Everyman’s memento mori. The world can only get comfy in shiny-eyed denial if we are out of sight.”

I was in a hurry, but that was my problem, not anyone else’s. The sandwich lady probably drew the short straw to place that asshole order for her office, was ordered to do so by an oppressive dick of a boss or was kind enough to take on such an obnoxious and thankless task out of the goodness of her heart.

The old lady at the ATM and House of Tabouli was just trying to figure things out. There’s no law requiring her to do so on my timetable. From now on, I’m just going to chill the fuck out about it. I hope.

*Yes, I know that translates into Rage Against the Automatic Teller Machine Machine. Work with me here.