Looks like it is just me here tonight. I’m still watching Georgia/Clemson and reading a trashy Clive Cussler novel.

Actually, this sort of sums things up rather well:

END_OF_DOCUMENT_TOKEN_TO_BE_REPLACED

Low key night tonight, starting with dinner, which was just mac and cheese and stewed tomatoes. Again. Got a bunch of tomatoes from the garden waiting to be devoured, so I see a tomato sandwich in my future.

I’m watching the Georgia v. Clemson game because mom is a Georgia grad and they are kind of my adopted team other than the Eers, and I was on the phone with mom talking about it, and I was petting Steve who was on my lap, and apparently I reached my belly pet limit and he bit me hard, and this happened:

Me: There is just something about the Clemson coach I don’t li… OUCH, DAMNIT TUNCH!

Both of us: Hysterical laughter….

I had to ask if this was ok to post, because she was really mad about my post last night because she knows who Miley Cyrus is and she thinks I made it sound like they are crazy old people. I mean, they are both crazy and old, but they aren’t crazy and old in THAT way. They’re both pretty with it.

And I’d be lying if I didn’t tell you the only reason I wrote this is because my dad made the best pasta fagioli the other day, but with a summer twist with a lot of zucchini and squash, and even though it was soup the squash and zucchini were both crisp and I inhaled it, burning my tongue in the process. So I asked him to make some more and I need to kiss a little ass here.

END_OF_DOCUMENT_TOKEN_TO_BE_REPLACED

Slept for six hours straight last night. Whoever invented infant anti-gas drops will get a condo in heaven.

END_OF_DOCUMENT_TOKEN_TO_BE_REPLACED

@AdamSerwer A clever way for the neocons to have their war and eat it too.

TPM has the full text of the President’s remarks, for anyone who wants to parse it.

What I’ve been looking for — unsuccessfully, so far — is information on how this will affect the G20 meeting, which is due to start in Russia next Thursday, with or without Congressional approval. Shortly before the Rose Garden announcement, according to the AP, “Putin urged President Barack Obama on Saturday not to rush into a decision on striking Syria, but to consider whether strikes would help end the violence and be worth the civilian casualties they would inevitably cause.”

This was not gonna be the most cheerful G20 under any circumstances, but the intersection of finance and politics-by-other-means cranks the gruesome up to eleven. And it’s not like they can just reschedule this year’s bunfest, because there’s (always) too much going on with the global economy to look for a convenient plague outbreak or an Icelandic volcano erupting.

ETA: Count on Time‘s Swampland to live up to its title: “To make matters more complicated, Obama’s aides made clear that the President’s search for affirmation from Congress would not be binding.”

The White House has sent Congress a draft resolution authorizing the use of American military force in Syria, with a narrow focus on interdicting chemical weapons — or their use — by the regime of Syrian President Bashar Assad.

The draft resolution, crafted by White House officials, does not set any deadline for U.S. action, but it is clearly written to assuage congressional concerns over open-ended American involvement in the two-year-old Syria civil war…

END_OF_DOCUMENT_TOKEN_TO_BE_REPLACED 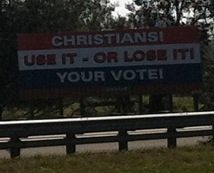 Seen on I-75 in Central FL. Busy day — and posting from an iPhone, which sucks big green gators (as a WP UI). Please discuss whatever.

END_OF_DOCUMENT_TOKEN_TO_BE_REPLACED

Didn’t see that coming! That’s the way it’s supposed to work, so good move, Mr. President. What do y’all think?

END_OF_DOCUMENT_TOKEN_TO_BE_REPLACED

Talk about whatever. College football, for example!

This must be the best song Big Star never did.