You are here: Home / Absent Friends / RIP / RIP, Artie Donovan, One of a Kind 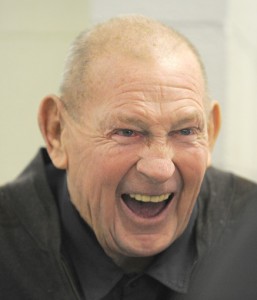 This is really sad:

Art Donovan played pro football for 12 years. The rest of his life, he spent telling everyone about it.

Donovan, 89, who died Sunday of a respiratory ailment at Stella Maris Hospice, played and talked a great game. He was a Hall of Fame defensive tackle for the Baltimore Colts and an engaging raconteur at banquets and on TV talk shows. His cherublike face, adenoidal voice and side-splitting tales of yore captivated generations of viewers who never saw Donovan collar a quarterback or take down a runner.

“Artie made a career out of telling people everything that he’d done right — and wrong — in football,” said Ordell Braase, his teammate on the field and in the broadcast studio. “The diversity of his appeal was amazing. Everyone wanted to hug ‘Fatso,’ from young girls to little old ladies.”

“My mom [Dorothy] was with dad to his last breath, as she was determined to be,” she said.

Ten times, Donovan appeared on “Late Night with David Letterman,” where he spun yarns about his youth in the Bronx, his hitch in the Marines during World War II and his experiences during the sanguinary years of the National Football League, when the game was played by “oversized coal miners and West Texas psychopaths.”

Often, his stories were laced with self-deprecating humor and some choice four-letter words. Like beer, Spam and junk food.

I know I have mentioned how my mom grew up a couple blocks from Memorial Stadium, and was a die-hard Colts fan. Daddy (what she still calls my grandfather, George), used to have a radio on top of the tv in case the tv went out, and back then, more often than not, it would. Mom and Daddy met the Colts at the train station when they returned from the Greatest Game in ’58, and when we were kids, we listened to that game on vinyl a number of times. She still winces when she hears the word Mayflower. So now you know where I got the sports bug- it wasn’t from the gardening/cooking/wallpapering/landscape sire (and don’t get me wrong, thank FSM for those inherited traits- except the wallpapering. Do people even use wallpaper anymore outside the White House?).

Back to Artie- some of my favorite memories of him were from his local Baltimore show called Donovan, Braase, and friends. Mom’s childhood best friend still lived in Baltimore, and would send VHS tapes with a whole seasons worth of the show, and Seth, mom, and I would sit down and binge on them, watching multiple episodes in a sitting. Artie Donovan was seriously one of the funniest and best story tellers I’ve ever listened to, and you just knew he was exactly the same on tv as he was while he sat on the corner bar stool drinking beer and eating crabcakes and living, as always, large.