(Get Fuzzy via GoComics.com)
.

I suspect this would make the Blogmaster’s head explode, but fortunately he doesn’t read my posts. The NYTimes reports on Tom Stoppard’s latest project:

In his 2006 hit play, “Rock ’n’ Roll,” the British playwright Tom Stoppard examined the relationship between music and politics, shuttling back and forth between England and Czechoslovakia over a 25-year period. Now, in a new work, a one-hour radio play called “Darkside,” he has narrowed his focus to a single famous album, Pink Floyd’s “The Dark Side of the Moon.”

Commissioned by the BBC to commemorate the 40th anniversary of the release of a recording that has sold more than 50 million copies worldwide, “Darkside” was broadcast in August and this week will be released in CD form (Pink Floyd Music). Mr. Stoppard has stripped the record of most of its lyrics, writing his own text to be recited over the original music while intermittently drawing on the band member Roger Waters’s words to provide commentary on what has just happened.

The subject matter of “Darkside” will be familiar to anyone who has ever taken a college course in ethics or moral philosophy. The cast, which includes Bill Nighy and Rufus Sewell, acts out familiar thought experiments from that realm, like the Prisoner’s Dilemma and the Speeding Trolley, with plenty of jocular asides and subtle jokes inserted…

END_OF_DOCUMENT_TOKEN_TO_BE_REPLACED

Nothing immediate to do in the morning, so I am up late licking my wounds after the Pens OT loss and watching a little tv. However, I thought I would share with you that our new Lord and Master, Steve, has decided that the place he wants to be tonight is in the second story perch of his cat tree. He raced through the house about four hours ago, jumped up in there, and has been there since. I dared life and limb to get these action shots (which I think, given my history of photographic skills, or lack thereof, are pretty good). First, I delicately awoke the lion:

Once awoken from his slumber, he extended a paw in peace, as if to say “I will let you live another day, furless monkey boy with lots of treats.” I stood back and took the best picture I could, knowing that I had awoken the beast:

As you can see, humans have carefully and cautiously offered ritual sacrifices of stuffed animals, toys, and, of course, and abundant helping of weapons grade catnip grown in the mountains the eastern pandhandle of West Virginia. True story. One of you sweet people sent me this bag of kine bud catnip through the postal service, and when I got it, it had clearly been searched as the box had been re-taped when I got it. I guess this aroused their suspicions: 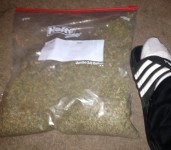 I made the pictures of Steve really big so you can click and embiggen them and enjoy him in all his majestic glory. He really is a keeper, even though he drives me batshit insane all day begging for food and knocking my mouse out of my hand.

Oh, and speaking of cool cats, Angry Black Lady is blogging again at her own site.

END_OF_DOCUMENT_TOKEN_TO_BE_REPLACED

And for the record, I do read the comments, and both piglets and Steve are A-ok. In fact, they are mulling around my feet as I write this because they have their internal clock set to 11 pm, which is when we go potty and then have the thing they love the most but thank FSM can still not spell- T. R. E. A. T. S.

They do so love their nightly rituals. As do I.

END_OF_DOCUMENT_TOKEN_TO_BE_REPLACED

Take it away, Emily. It sure is nice to see that she has a bigger platform now.

END_OF_DOCUMENT_TOKEN_TO_BE_REPLACED

Whoa. Did someone put something in Tom Friedman's mustache? Now I understand what Jennifer Rubin was freaking about: http://t.co/Oa6qt9rtk3

Fortunately for the nervous among us, NYMag‘s Dan Amira did a roundup of “What Everyone Is Saying About the Iranian Nuclear Deal“, and Bill “Always Wrong” Kristol hates the heck out of it, ergo it can’t be that bad. (Ari Fleischer, Dubya’s former mouthpiece, tries to out-ugly Ralph Reed’s late-night outburst; somebody’s looking for some negotiable affection from the Wingnut Wurlitzer.)

END_OF_DOCUMENT_TOKEN_TO_BE_REPLACED

There may be no more destructive force for the state of Israel than her alleged supporters in the United States:

New York Senator Chuck Schumer was his usual hawkish self on Sunday evening. In an address to the OHEL Children’s Home and Family Services gala, Schumer railed against the deal the Obama administration struck with Iran and vowed that Democrats and Republicans would work to pile on more economic pressure on the country.

“Democrats and Republicans are going to work together to see that we don’t let up on these sanctions…until Iran gives up not only its nuclear weapons, but all nuclear weapon capability, all enriched uranium,” Schumer said. ”Every time the Arab world, the Palestinians, have risen against us, we have risen to defeat them. The one existential threat to Israel’s existence is a nuclear Iran.”

Who is he referring to as “we?” The United States? The Western World? Jews in general? The nation of Israel? Who is he speaking for?

If it is the latter two, then why does it make me a bigot or intemperate or making a dual-loyalty smear to note that he actually is elected to the United States Senate and not the Knesset, and it isn’t his job to enable a madman like Netanyahu? It just isn’t. And I have no idea why anyone who wants peace in the Middle East OR for Israel to survive would side with the lunatic Bibi and his crew of madmen.

END_OF_DOCUMENT_TOKEN_TO_BE_REPLACED

Thanks to the many folks who answered my last thread. You won’t mistake me for Nate Silver, but I think the following points are worth sharing.

* Nearly everyone (around 90%) had some sort of problem with their websites, with clueless call-in staff or both. However,

* …of those who went ahead with it, only three people, around 10%, still have trouble signing up for insurance. At least one sounds like a problem that other people have fixed either by creating a new email and login ID or clearing out cookies.

* America badly needs a thumbnail guide for bypassing the most common problems. A LOT of you got your plan by being tech-savvy or finding a work-around that the average user should not be expected to know. The guide should include website tricks like the above, how to find your plan on Sherpa and then go directly to the insurer if necessary, and how to know when your insurer is jerking you around (plus what to do about it). By necessity someone should host it on the web since problems crop up and get fixed on a daily basis.

* Notwithstanding the usual bullshit behavior from insurers themselves, California has nothing but happy customers. You guys also seem quite happy with your experience in Minnesota, Kentucky and Washington.

* Maryland, WTF? Also Rhode Island. These seem like states that ought to know what they are doing, yet they both really tied their shoes together with the Affordable Care Act.

* In just about every story that involves navigators, they started October lost in the woods but got a lot more helpful over time.

To summarize, it sounds like almost everyone who wants care today can get it. The worst bugs have been squashed but clearly some annoying ones remain. I would hardly let Obama off the hook, in fact some folks in DC, Maryland and Rhode Island need to clean out their desks, but folks who show up for the inevitable deadline crush will most likely get what they need. In a year or two nothing else will matter.

If you still have a problem, please describe it in the thread below. Odds are pretty good that someone here encountered the same thing and found a workaround to solve it.