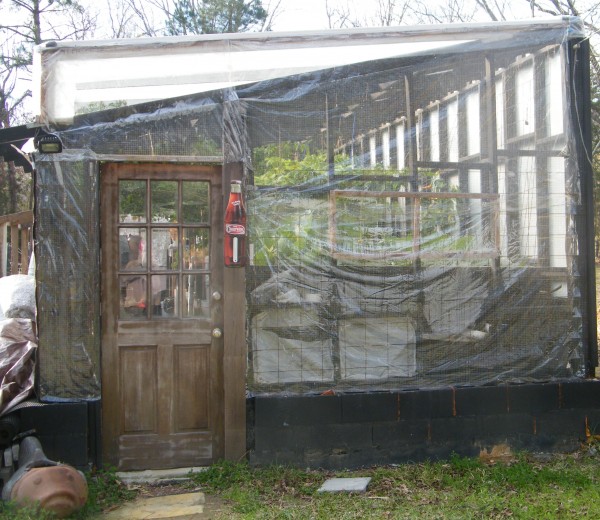 One of my personal boycotts is against blog posts that are listicles or that are entitled “Why…” The listicle “thing” has gotten seriously out of control and I am sick to death of posts that purport to give a final explaination of some great (or not-so-great) truth (Ezra Klein, I’m looking at you.) With that in mind, here are A Bunch of Reasons Why I Love Aquaponics and So Should You.

First a thumbnail sketch of aquaponics (AQ) in general and as practiced in the above pictured greenhouse. AQ is the process of growing plants in water like hydroponics but the fertilizer is (mostly) provided by fish who live in the water used to flood the plants. It is, at it’s heart, a symbiotic relationship wherein the plants feed from the fishes’ effluent which cleans the water that is returned to the fish who then, frankly, shit in it again. Fish gotta do what fish gotta do. The good news is that fish poo is just about the best poo you can use for plant food.

My AQ setup is housed in a 12×40 greenhouse and is comprised of a 600 gallon fish tank containing ~200 fish, four 4×7 gravel planting beds and a sump which runs most of the length of the greenhouse. I use one pump to pump water into the fish tank and the dirty water from the tank runs by gravity to the four planting beds. You have to have at least a 1:1 ratio between the volume of your fish tank and the total volume of all planting beds. You can support up to a 1:2 ratio. I have a 1:1.33 ratio. I have a total of about 1200 gallons in the whole system. The water is used over and over again and only lost to the system through evaporation and plant use. It it generally thought that AQ uses 1/10th the water needed for traditional gardening. This was a big selling point for me as I hate paying water bills and watering plants. 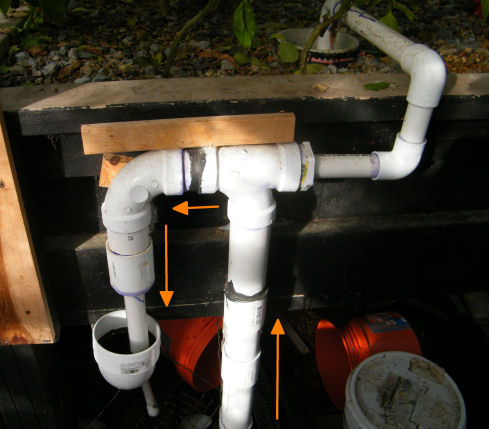 The water enters the bed relatively slowly but exits quickly through the use of a siphon (shown above) similar to the siphon used to evacuate your toilet bowl. The orange arrows in the above picture indicate the direction the water flows. When it reaches the top of that pvc gooseneck and begins to drain over, it kicks off the siphon. It takes nearly 30 minutes to fill the bed but less than 5 to empty it. This is important because it sucks oxygen into the root zone. This also helps clean the water as the gravel “polishes” it removing all solids which remain in the bed available to the plants. A lot of aquaponists use the bell siphon system but I found it to be very, very temperamental whereas the loop siphon works pretty consistently. The pvc piece in the upper right hand corner helps the siphon stop when the water level is low enough to suck air into the siphon.

Fish poo is unusual relative to other animal waste in that it is immediately suitable for use by plants without composting. Worms also like it and will populate any AQ bed and that serves to further break down any solids. Finally, of course, the system depends on the nitrogen cycle to clean the water of dangerous nitrites that would harm the fish. In fact, the first step in the setup of an AQ system is to get the nitrogen cycle started, usually using ammonia, before fish are introduced.

The cleaned water dumps into the sump where it is pumped back into the tank through a venturi nozzle that infuses the water with oxygen – good for fish and great for the plants. From the fishes’ perspective, the AQ system is a giant filter and the principles involved would be familiar to anyone who has ever kept an aquarium or done water gardening. However, the “filter” is overdesigned specifically so you can overcrowd your tank without endangering the health of the fish. You need a large number of fish in order to make enough fertilizer for heavy feeders like cabbage and tomatoes. If you use game fish in the system, they will mature and you can eat them. However, AQ should not be considered a way to raise fish for food because it will never supply enough fish to be more than a meal now and again.

I have a mix of catfish, goldfish and a few bream. If it were up to me, I’d only have goldfish. They are very tough fish where most game fish are more sensitive to water conditions. Also I like the pretty colors. The experts will tell you not to buy feeders because feeders aren’t well-bred. On the contrary, I have had very good results with feeders and they have 2 real benefits going for them:

.
That is pretty much the basics. There is, of course, much more to it and it is an ongoing learning experience for me. I’ve had fish in the system now for about a year and a half. The first year is really a shake down cruise though I did see some results and was generally pleased with the production.

Some plants do very well in the system, others not so well. Green, leafy things generally do very well and it is not unusual to see plants get really large really fast. I have an eggplant that is still producing that is over 6 feet tall. Tomatoes, peppers, cucumbers, and eggplant all do well. Okra, not so much. Above right is a picture of a cabbage currently growing in the AQ bed. On the left is a cabbage planted about the same time outside in my raised bed (outside cabbages are being fertilized with chicken poo – so it’s the battle of the poos, chicken v. fish.) The AQ cabbage is easily twice as big though the head is not nearly as compact. I really can’t get over how huge the leaves are on the AQ cabbages and I’m looking forward to eating this one on New Years with some black eyed peas, etc. 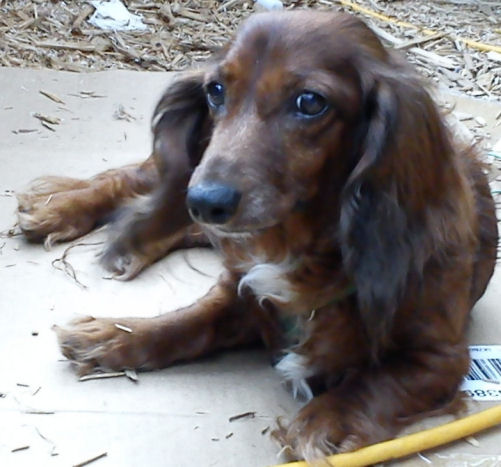 Finally, what Balloon Juice post would be complete without a pet picture? This is Vidalia, a 12 year old (11 in this picture) longhaired miniature dachsund, my constant companion and the sweetest dog that ever drew breath. Honestly, I don’t think she cares a whit about aquaponics, but she tolerates my obsessions and gives me a reason to get up in the morning.

If anyone has any questions about AQ or my project in particular, I’ll do my best to give a coherent answer or help direct you toward more information.