You are here: Home / Healthcare / World's Best Healthcare (If You Can Afford It) / Yeah — Ross Douthat Is Still Bluffing

Update: Yeah, I just noticed John posted on Douthat’s column below.  We’ve got different angles — and his is the more pressing.  So read what follows as more a way to understand how it is that Douthat belongs to the tribe of the always wrong, and let it go at that.

The Grey Lady has a problem.

It needs, or thinks it does, a clear, articulate, analytically sophisticated conservative voice on its op-ed team.  David Brooks is tasked with handling most of that load, with the results we’ve discussed here many times, but Ross Douthat was the right-wing wunderkind poached from The Atlantic who was supposed to be the conservative model of the new generation of precocious opinion journalists that bubbled up during those halcyon days of the early to mid-2000s blogging boom.

It hasn’t quite worked out that way.

Consider today’s column.  I’m not going to do go full metal fisk on the piece.  Douthat tries to persuade his audience that the CBO report — the one that showed that the ACA works as intended,  liberating workers from jobs they perform only to hang onto health benefits — is actually testimony to how liberal government denies the dignity of work.  You can read the thing for yucks if you like that kind of up-is-down talk.

Here, I want to get to is the basic dishonesty not just of one argument in one column, but of Douthat’s method as deployed here.

The test was to click on each link in the piece, and see if Douthat’s claimed sources actually supported whatever he invoked them for.  Spoiler alert:  almost to a one, they did not.

Link number 1 is actually OK.  Douthat invokes a Keynes essay, and that essay appears at the end of the intertube he lays down, making the prediction Douthat says it does.

What comes next, though, ain’t so pretty:

This link takes you not to an original study but to a summary of others’ work posted at the National Bureau of Economic Research.  If Douthat had checked behind that summary he would have found that the picture of socially climbing workers taking on ever more hours over time isn’t exactly right:

That messier, hence less convenient picture is just the appetizer for the real misinterpretations to come.  Douthat claims that money and status drive folks to work long hours.  But the NBER summary at his link asserts,

Aha! Not virtue but necessity keeps people on the job nights and weekends.  From the underlying paper:

We find that two group characteristics — a rising level of within-group earnings inequality (at fixed hours) and a falling (or more slowly growing) level of mean earnings at ‘standard’ (40) hours– are associated with increases in the share of workers usually supplying 50 or more hours per week.

IOW, even for better educated/salaried workers, long hours are a response to a decline in or threat to earning power at normal so much  a status thing, and not exactly a rising pay story either.
It gets worse when Douthat finishes his sentence with an implied indictment of lower-paid labor.  He writes: 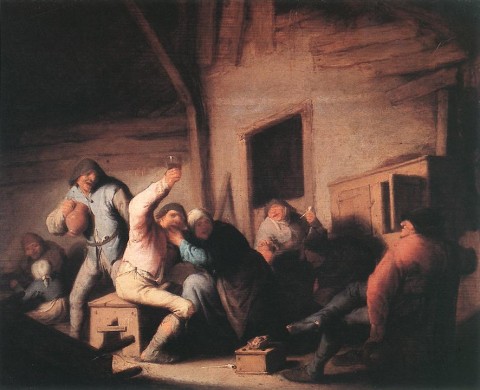 Once again, the linked piece doesn’t say quite what Douthat claims.  It does have a political tinge — its author cites Charles Murray admiringly, which is always a tell — but the analysis is plain enough:

…a big factor is that – partly due to globalization and technology – the wages of less-skilled, less-educated men have been falling. Simply put, that makes them less willing to get off the couch, particularly if finding a job demands running a gauntlet of on-line applications or requires a move or a long commute or surrendering government benefits.  The surest way to put the most employable of these men back to work would be a stronger economy in which jobs were more plentiful and employers couldn’t be so picky about filling openings. [emphasis added]

So it turns out that Douthat’s disaffected workers aren’t merely and passively disconnected.  They’re barred by actual conditions in the real world from finding work.  A better economy would lower that bar and see re-entry into the labor force.  To be fair, Douthat does note that rising inequality has an explanatory role to play in what he claims are two trends. But the links he provide to support his attempt at social analysis confirm essentially nothing of his interpretation.

Next up, Douthat engages the CBO report itself:

The Congressional Budget Office had always predicted that the new health care law’s mix of direct benefits and indirect incentives would encourage some people to cut their hours or leave their jobs outright. But its latest report revised the estimate substantially upward, predicting that by 2021, the equivalent of 2.3 million full-time workers — most of them low-wage — could disappear from the American economy.

Yet again, Douthat links not to the report itself, but to a Washington Post article summarizing and in part spinning that document.  And it turns out that Douthat’s “full time workers” disappearing number is not quite right.  Here’s what the CBO actually reported, (p. 127)

Because some people will reduce the amount of hours they work rather than stopping work altogether, the number who will choose to leave employment because of the ACA in 2024 is likely to be substantially less than 2.5 million. At the same time, more than 2.5 million people are likely to reduce the amount of labor they choose to supply to some degree because of the ACA, even though many of them will not leave the labor force entirely.

I’ll admit that’s a relatively minor error on Douthat’s part (though the rhetorical torque he applies with the word “disappeared” puts it into the realm of bad faith to me).   But more important, note that Douthat didn’t delve into the actual CBO report itself, at least not enough to grasp any nuance — relying instead on the Post article’s own flawed account.
__
IOW:  sometimes the little mistakes are the most revealing.  You can’t argue with folks who don’t know what they’re talking about.  Those of us trying to understand health care in America by reading the country’s newspaper of record should have the confidence that what they find there is based on best attempts to identify actual facts.  Douthat does not encourage such confidence.
__
Please proceed, columnist!
__
Next, we have Douthat’s attempt to claim that there really is a better, conservative alternative to Obamacare.

the design of Obamacare … makes the work disincentive much more substantial than it would be under, say, a conservative alternative that offers everyone a flat credit to buy a catastrophic plan.

I think he’s trying to say that giving everyone health insurance that almost never insures would trap more people in the jobs they’d need to mitigate the risk of everyday mishaps, but that’s for another argument. I could also  take issue with the notion that the document he links is an actual alternative, and not some cobbled together bit of hand-waving and familiar right wing talking points on health care.  But there’s no doubt that at the point we’re still  the territory of op-ed privilege.
__
But here’s the real problem — and it’s one Douthat could very well have slid past all but the most careful of editors.  In the next paragraph he writes:

One of the studies used to model the consequences of Obamacare, for instance, found a strong work disincentive while looking at a population of childless, able-bodied, mostly working-class adults

That sounds like a good serious pundit doing his homework and digging into the academic research on his topic.  But if you click that link, it won’t take you to any study — not even a Heritage parody of social science.  Instead, it returns you right to the doorstop of the “alternative” proposal Douthat invoked in the prior graf.  There’s nothing else there at all, and certainly nothing any neutral observer would recognize as actual inquiry.  This is just a lie-by-citation.

Believe it or not, the beat goes on.  Douthat bloviates on his own dime for a few paragraphs before coming up with this :

On the left, there’s a growing tendency toward both pessimism and utopianism — with doubts about the compatibility of capitalism and democracy, and skepticism about the possibility for true equality of opportunity, feeding a renewed interest in 1970s-era ideas like a universal basic income.

There are two classic blunders: The most famous is  never get involved in a land war in Asia, but only slightly less well known is never, ever, trust Ross Douthat when he tells you what “the left” is thinking.

The first link takes you not to a critique of capitalism by, say, Joe Biden or even the House Progressive caucus, but to a lengthy and fascinating New York Times account of a book by a French economist that has yet to appear in English.  It’s an important piece of work, I hear, but hardly evidence of a growing American political tendency.

The second brings you to an interview with the author of another book yet to be released —  by Gregory Clark, an economic historian at Davis who has been arguing for some years for a biologically heritable account of economic outcomes.

There’s lots of people who argue with Clark’s work.  But for this discussion the question isn’t whether his brand of biological economics is bonkers or worse.  For this argument it is, does Clark speak from or for anything that could remotely be called the left?

The answer is no: he is one economist controversial within his own field, whose views, if they have any political stamp, have been much more eagerly received by latter day eugenicists than by any recognizable wing of, say, the Democratic Party.

Again: Douthat is a pundit.  He gets to be stupid on the Times’ dime.

But he shouldn’t get to claim authority he doesn’t have — the intellectual buttresses of knowledge he hasn’t actually worked to acquire or analytical effort he hasn’t put in.  Every single link in this piece but the one that just takes to Keynes is flawed, often deeply so, in the sense of supporting the superstructure Douthat wants to erect on top of his claims of erudition.  At best, he’s bibliography-padding, attempting to baffle his readers (and, I think, his editors) with the appearance of someone who does the hard work of thinking.  At worst, he’s misappropriating others’ labor to his own ends.

Echoing Gandhi’s apocryphal jibe:  were I asked what I think about right wing public intellection, I’d reply, “I think it would be a good idea.”