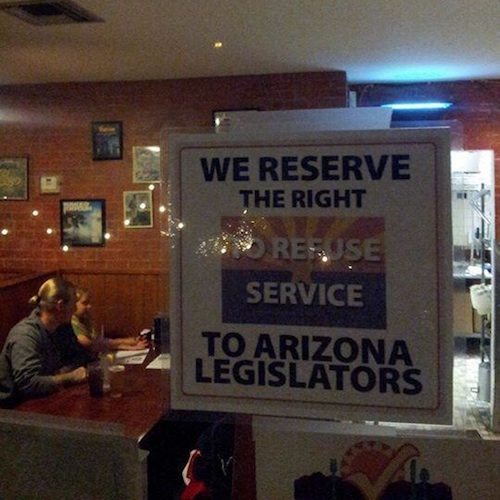 I am re-posting this whole open letter in CNN from the restaurateur in Tucson who had the sign above which went viral:

On Wednesday, Arizona Gov. Jan Brewer rightly vetoed the state bill that would have allowed businesses to deny service to gay people on religious grounds. I had a bet with a friend that she wouldn’t sign it — and wonder why it took her so long. She won’t take a hit to the pocketbook — she’s too savvy for that.

In the days leading up to this, I put a sign in the window of my pizzeria that said: “We reserve the right to refuse service to Arizona legislators.” The reaction was vastly and overwhelmingly positive, with only a few people telling me they wouldn’t ever eat at my restaurant again. Mainly, we have received many, many messages of support; phone calls, e-mails and texts, from people who live in Tucson, across the state and even from outside the United States.

The sign is part of a tradition we have. When I moved into the supposedly cursed restaurant space on Broadway in Tucson, Arizona, 15 years ago, I found a box of letters — the kind you put on a marquee sign out front. By the end of the day, I had a message on the sign. We’ve been changing it every day since. I am often told people plan their routes to see what we have to say each day — even if just for a chuckle.

Sometimes we put up song lyrics, or a snarky comment about someone in the news, such as Anthony Weiner. One day we put up “Free Pussy Riot.” Some people get their knickers in a twist about our messages, but we do it for ourselves as much as anything.

Then I learned that the state Senate once again passed an appalling bill that attempted to save me from my fellow Arizonans. I thought, “Oh no, not again.” If anything seemed ripe for parody, this was it.

It was irresistible. I instantly typed a comment on my Facebook page, saying that the busybodies in the capital of Phoenix were not allowed to come in and sit at my table. Minutes later, one of my followers supplied the sign that so eloquently expressed my viewpoint. I laminated it, and by that afternoon it was on my doors.

Since then, a lot of similar signs showed up in the windows of Tucson businesses saying “We reserve the right to serve anybody.” Tucson is a little more liberal than Maricopa County and Phoenix: We’re a university town. People here just don’t care about things like that. At restaurants, we just serve you and smile.

Arizona businesses have already been hurt by reactionary positions, such as our anti-immigration laws. The state has been boycotted before — and it hurts because we depend a lot on tourism.

As well as hurting small businesses, plenty of large companies have reconsidered locating here, saying, “We’ll take our dollars elsewhere.” One business owner, reacting to this legislation, even told me: “Arizona is the American Uganda” — where they put gay people in jail. We have so much poverty, terrible roads, some unbelievably bad schools — and this bill is what our legislators wasted their time on.

Many Americans think they know what living on the border is like. But Tucson was long a part of Mexico until the Gadsden Purchase in 1853. Many of our old Indian, Mexican, Chinese and Anglo families here have histories that go back long before Arizona was even a territory of the United States. And as in much of the West, a live-and-let-live philosophy pervades our lives here in a real and tangible way.

This century will be one of expanding civil rights for individuals. But Prohibition, Jim Crow, Indian schools — where they tried to make Native American children abandon their identities — and anti-Chinese immigration laws are not so far in the past that we can safely ignore them. They were wrong, just like discrimination against gay people is wrong.

I cannot condone discrimination against one group of people. Regardless of the kind intentions of the lawmakers to the north of Tucson that were trying to make sure I have freedom of religion, I already have it. This bill was gratuitous as well as ridiculous. I can already refuse service to anyone — and that includes any one of those several dozen Arizonans who aren’t representing my views in Phoenix.

In most of America, gay-bashing has jumped the shark, and what is known as the arc of history is clearly moving in one direction, but I often wonder if the T portion of the LGBT equation is going to be left behind. And why can’t we use this experience as a lesson for why we shouldn’t discriminate against anyone? Regardless, I love this guy and if I lived in Arizona I would frequent his joint. Although at this point I probably wouldn’t eat anything there besides a salad. Actually caught myself walking through the grocery today and was in the cookie aisle and looked at some of that crap and just thought “How fucking gross. I wouldn’t feed that shit to my enemies.”