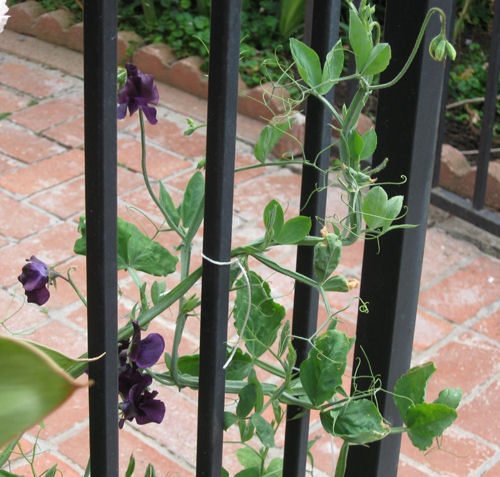 The sweet pea seeds that HBM planted last fall that I was complaining about not coming up in one of the previous garden chats (October?) did eventually sprout and have just started blooming.

One, a species variety named “Electric Blue” you can only get seeds from at Renee’s Gardens, was intriguing. Its leaves were very narrow and needle-like and it prospered much better than the regular container sweet peas in its pot because it handled the lack of water so much better than its fat-leaved companion. I could hardly wait until it started blooming; here is one of its flowers: 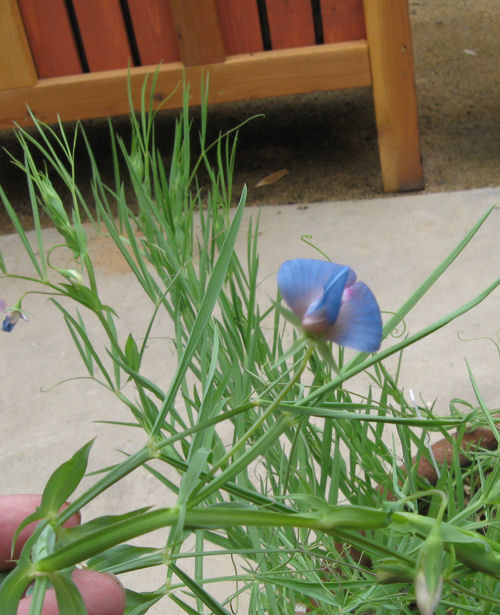 They are very tiny and don’t make much of a visual impact from any distance away, but up close they are striking – blue on the face and purplish-pink on the back of the flower. It looks like there will be a lot more blossoms when the full flowering is in progress. I can hardly wait to see them.

Lastly for flowers, the first one came open in the first raised bed from seeds I planted on January 27th of this year – a little seashell cosmos. Lots more have buds, but this is the very first one. 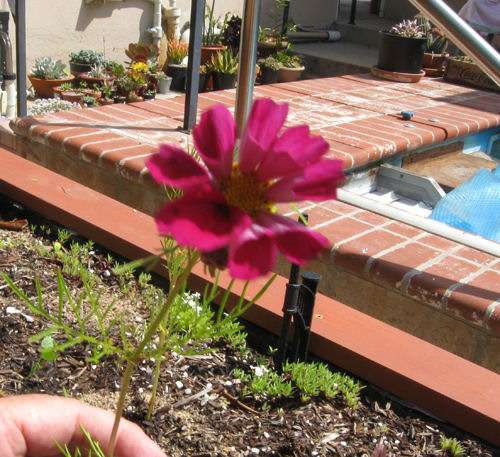 I planted easy things at first because it has been so long since I have been able to garden and I wanted to have some successes. Comparing seeds has been interesting – I wanted bush green beans and bought seeds from a couple of different companies at Lowe’s. First there were the expensive (around $3) vacuum-sealed Seeds of Change variety, which came up afflicted with black splotches and don’t look that good: 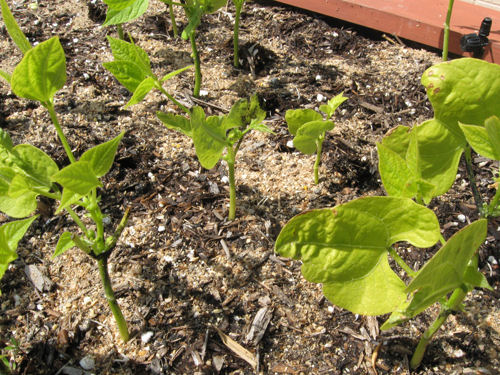 It’s not a function of the soil, because everything else in that bed is unaffected.

About six weeks later, I planted more in another raised bed, this time just regular old Ferry-Morse seeds in the old-style paper envelope for $1.59. They are healthy and sassy plants, almost catching up in height despite being started so much later: 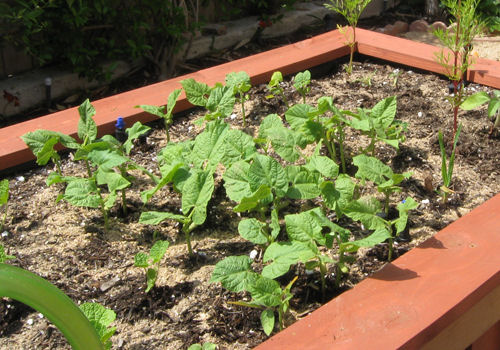 So you don’t always get what you pay for!

I have become completely obsessed with gardening and do it as many hours as I can stand to. My health is much better as well since HBM came. I have had severe rheumatoid arthritis since 1979 and since then have always had a really high result in one blood test, called the sed rate. Normal is 10-15 and I have averaged 38-58 during less active phases of the RA and way more, even more than 100, during really bad flare-ups. My best result in the past couple of decades was 28. This year, both in December and repeated this month, it has been all the way down to 14 – in the normal range I never thought I’d see again.

We also figured out a work-around for watering things not on the automatic drip. I have lost more than half of my carpal bones in my wrists, so twisting the little valve on the hose bib was a literal pain. Worse, all the hose bibs were in locations completely inaccessible to someone in a wheelchair, so I was always asking HBM to fill up my watering can. He was glad to do it, but I also would rather do things myself and after thinking it over, I got the plumber and we came up with this solution: 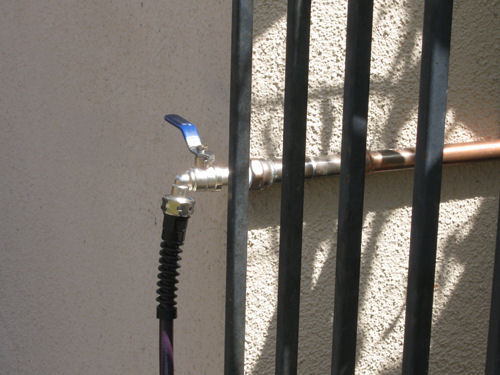 Even HBM had trouble getting this particular hose on, but now that pipe was pulled across the house and out to the corner of the planting bed, and installed with a levered handle I can reach it in a wheelchair or scooter and pull water out anytime I need it. The hose was horribly expensive, $30 for 25 feet and $51 for 50 feet, but it only weighs a pound and a half for 25 feet of it, so I can drag it over to anywhere that needs attention easily myself. With a spray nozzle on the end there is very little water wasted. The old fixtures leaked water all over everywhere, so this should save more water.

Succulents are flying off the shelves of nurseries around here and I see that many of the places that sell them on the web are running out of stock of many varieties. HBM and I have decided to look into getting a California nursery license and make succulent boxes and other planters to sell at the farmer’s market, as somewhere suggested in the comments to our last garden chat… We are going to the Orange County Cactus and Succulent Society’s sale and show and I hope to come home with a lot of good stuff.

Finally, though nothing to do with garden chat, I am happy to report that after a long and somewhat grueling and nerve-wracking process, the pets are all getting along now. From left to right, Chenielle, Shiloh and Leland waiting for evening snack call after a long day of watching us garden: 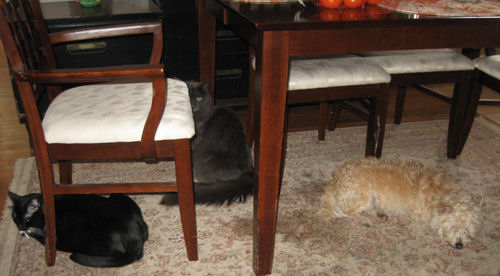 Previous Post: « When I Get Back This Room Better Be Picked Up
Next Post: Wha’d You Bring Him In Here For? »