You are here: Home / Politics / Politicans / David Brooks Giving A Seminar At The Aspen Institute / Porcine Flight 476, You Are Cleared For Landing

Go check on your friendly neigbhorhood Sus scrofa.  Examine the potbellied porker ambling down your too-hip avenue.  Make sure the boar in the corner sty (you could name it Dick Cheney if you’re that kind of person) is still properly rooting about in his muck.  Now look extra carefully:  any ailerons, flaps, wings? 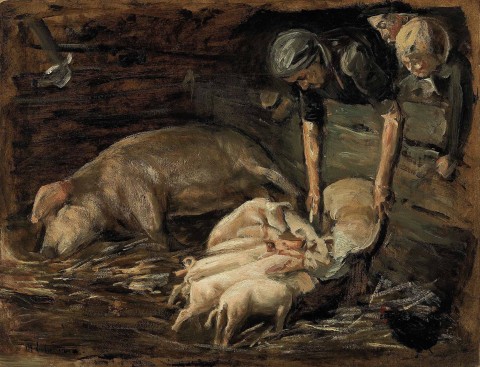 They’ve got to be there.  See this, from our old friend BoBo:

The Iraqi state is much weaker than the Rwandan one, but, even so, this quick survey underlines the wisdom of the approach the Obama administration is gesturing toward in Iraq: Use limited military force to weaken those who are trying to bring in violence from outside; focus most on the political; round up a regional coalition that will pressure Iraqi elites in this post-election moment to form an inclusive new government. [Emphasis added.]

Now I confess to deep uneasiness about everything David Brooks writes, given the argument from negative authority.*  I lack the knowledge to assess but have no faith at all that his potted history of post-genocide Rwanda is reliable.  And then there’s Brooks’ usual reflexive nod to the political value of elite authoritarianism.   Most of all, nowhere does Brooks acknowledge explicitly that the Bush years were a colossal f**king mistake/moral disaster, nor that he was a complicit cheerleader in that catastrophe.

But here you see Brooks implicitly acknowledging the failure of the neocon adventure and, mirabile dictu, stating without a hedge, an “on the other hand,” or any other qualifier that President Obama is getting it right, is wise.

Smacked in the gob am I.

All I can say is:  be careful standing under today as those flocks of pigs fly by.

*I.e. While it’s never reliable to say that because someone is labelled an expert in something, anything they say is likely right (see, e.g. Shockley, William…), it is a very useful heuristic to assume that someone who is wrong a lot is going to be similarly wrong going forward.  That’s especially true for someone — so many in our pundit class — who are wrong for a living.

Image:  Max Liebermann, Schweinekoben, Wochenstube [My German sucks, but the Google machine tells me that this could be read as “Pigsty, Maternity room” — any help from the commentariat gratefully received], 1887