You are here: Home / Open Threads / Because of wow. / My New Favorite Judge

Would be Bush 41 appointee Richard Kopf*, a member of the Federal District Court bench for in Nebraska.

In the Hobby Lobby cases, five male Justices of the Supreme Court, who are all members of the Catholic faith and who each were appointed by a President who hailed from the Republican party, decided that a huge corporation, with thousands of employees and gargantuan revenues, was a “person” entitled to assert a religious objection to the Affordable Care Act’s contraception mandate because that corporation was “closely held” by family members. To the average person, the result looks stupid and smells worse. 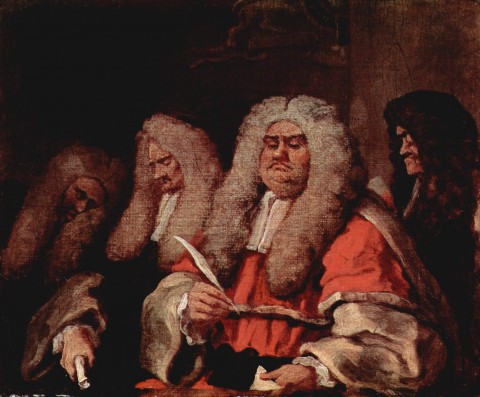 Kopf adds both in a disclaimer both truthful and politic that he is not saying that the majority in the Hobby Lobby decision were actually driven by the considerations that it really really looks like they were.  But the point is made — and he adds the equally valid observation that there was no actual necessity for the Supremes to take the case in the first place.  Such judicial passivism, he says, would have been better than this result.

In that context, the good jurist has the temerity to offer advice to his betters:

To which I say, Amen and Amen.

*As the TPM piece linked above reports, Kopf achieved a measure of — fame is not quite the word — notice for an earlier blog post advising young women lawyers how to dress for court.

**I do love the link that Judge Kopf kindly provided for his less internet-meme-familiar readers to that last term.

Image:  William Hogarth, The Court, c. 1758.  You’ve seen this one before, I know.  I generally try to find a new image for every post, but this one so perfectly captures the contempt I feel for the current Court that I just keep coming back to it.  Sorry.