You are here: Home / Open Threads / Meet The New Dixiecrats

Hi, it’s Zaid here. I want to thank John for giving me this opportunity and I’m glad to be writing alongside Tom and the others. Balloon Juice is an awesome read, always, and I hope I can provide the same.Now, jumping right into it.

As you’ve probably noticed, Israel is bombing the heck out of Gaza. The reasons for this are myriad, but often presented as Israeli self-defense for rocket fire. Scott McConnell at The American Conservative and JJ Goldberg at The Jewish Daily Forward have the best timelines for why that’s bunk — Bibi Netanyahu broke the ceasefire that had been in place since November 2012, largely for political reasons.The ceasefire itself was under very limited conditions with Hamas, the political movement with a militant wing that controls Gaza. During the past seven years, Israel has continued to control access to Gaza’s imports, land, sea, and air. The Gaza Strip has been under virtual siege this entire time, with Israelis even counting out the calories they estimate Gazans are allowed to have. This siege, which is essentially a soft form of war on Gaza’s entire population, is the main reason there hasn’t been a renewed ceasefire — Hamas has offered one, but it must include some alleviation of the siege. The Egyptian offer includes no such thing.

Still, I have been told by numerous Professional Democrats over the past few weeks — people who work in liberal organizations close to the Hill and White House — that this is a very complicated situation, and that I’ve made it all too simple in my narrative of the Palestinians being denied basic voting rights or statehood for nearly fifty years. I don’t really believe that, and privately, many others in American politics don’t believe that either (for example the Clintons, who I’ve heard through several well-placed sources, really strongly dislike Netanyahu and blame him for the failure of talks).

But let’s say the issue really is very complicated. Then we have to ask ourselves, why is the American response so simplistic? Our politicians line up behind the Israelis in every action, never threatening to cut aid or weapons flow or ending our veto of UN resolutions pertaining to the issue. That’s certainly not a complex approach.

Yet the most simple response I’ve seen yet has been from a group of New York Democrats who held a rally in favor of the Israeli action. In their telling, there are no Palestinians stripped of rights for decades that they would instantly get if they were, say, from New Jersey but could make a credible claim they are Jewish (they would get instant citizenship under that circumstance). There is no cruel siege on Gaza, nor ever-expanding settlements (read: colonies) in the West Bank that are making a Palestinian state their impossible. There is only the defense of Israel:

“The people outside protesting are protesting because innocent Palestinian civilians have been killed. It would seem to me the protest would be with Hamas because you cannot negotiate for peace if you cannot control those people who are supposed to be your negotiating partners,” Mr. Rangel declared.

“As peaceful as I am, I find it impossible for me to believe that someone who says I should be dead, I should negotiate and see how dead you want me,” he added. […]

“Our enemies have sought the destruction of the Jewish people for thousands of years. Much of the opposition you’re seeing to Israel and its policies, much of what you hear out there, is no more than a new face for a very old hatred and a very old evil,” Mr. Nadler said, alluding to the protesters beyond the gates.

Notice Nadler’s allusion that the peace protesters are simply motivated by hatred of Jews (as far as I’m aware many of the protesters were themselves Jews who oppose Netanyahu’s policies).

New York City politicians are infamous for their pandering to hardline supporters of Israel (it’s a myth that Jewish Americans are united in support of Israeli policy, but older, hawkish donors, many of them from New York,  form much of the backbone of the pro-Israel lobby, alongside Christian Zionists). Here’s New York City Mayor Bill DeBlasio with Avigdor Lieberman: 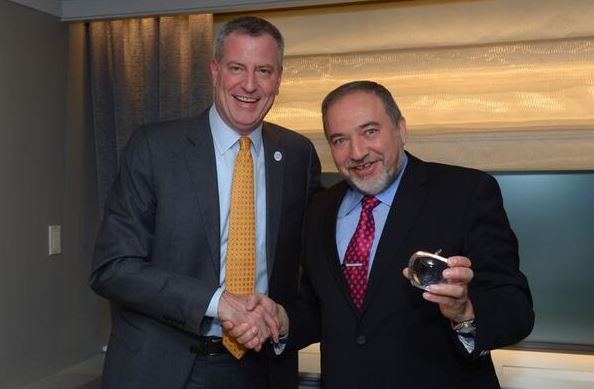 Who is Avigdor Lieberman? He’s the Israeli Foreign Minister who has called for the execution of Arab lawmakers and wants to expel Israel’s small Arab population into the Palestinian territories, a plan which led to condemnation from not-at-all-a-leftist Ariel Sharon. By all means, Lieberman is the polar image of those Muslim extremists who seek to destroy Israel and expel its Jewish population. Yet erstwhile progressive DeBlasio leaves his own values at the door to pander to extremists like Lieberman, knowing that New York City’s Arab population doesn’t have the political capital to punish him.

But for New York politicians, pandering to Israel really isn’t enough. They’ve gone out of their way to endorse policy that proves to many of their donors that they can Stand Up To The Muslims. When it was revealed that the NYPD was conducting thorough surveillance of innocent Muslim student groups, mosques, even kabob shops, none other than Netroots Nation speaker Chuck Schumer rode to their defense. New York City politicians were so mute about the spying scandal that you couldn’t find a high-profile critic of the NYPD until you crossed the river and had Chris Christie of all people defend New York (and New Jersey’s) Muslims.

I grew up in the South in the 1990’s, and I was blessed to be living in a time that was post-segregation. A lot of people don’t know this, but the South today is more well-integrated than the Northeast and Midwest (the West has a very small black population relative to the East Coast, so it’s sort of problematic to compare segregation here and there by the traditional black-white ratios).

I was welcomed by my mostly white neighbors and friends, and even after the 9/11 attacks, I was overwhelmed by all the people who came to my family and told me they would watch out for us if anyone gave us trouble.

This didn’t happen magically. As the readers of the blog know, there was a robust civil rights  movement, and people even gave their lives, to ensure that the South would change. The Democratic Party’s Southern members were the most vocal and outspoken advocates against racial integration, and the famous Dixiecrats, pulling for the votes of white racists, made a name for themselves in rejecting the policies of their Democratic presidents Kennedy and Johnson.

When I watch New York Democrats who are pro-LGBT rights, pro-labor rights, pro-equality in virtually every arena endorse NYPD spying on Muslims, grotesque attacks on basic faith rights (the “Ground Zero Mosque” controversy), and pander to extremists like Avigdor Lieberman, I’m reminded of the Dixiecrats. A lot of liberals are offended by this suggestion, I’m sure, but a lot of liberals just don’t pay much attention to American Muslims or Arabs, and the way they are marginalized in our body politic.

In the coming years, the Democratic coalition may shift South. Enormous numbers of hispanic immigrants and immigrants from rest of the country, as well as increased participation by young people, women, and African Americans, all of whom are much less anti-Muslim than the AIPAC crowd, should place the South in solidly Democratic territory within the next decade. As Israel slides towards being a pariah state and the U.S. disengages from its wars in the Muslim world, it may be that the Democrats of the Northeast do find themselves in a historically mirrored position — defending extreme anti-Muslim policies in an attempt to please donors who judge policy simply by its pro-Israel, anti-Muslim optics.

One would hope that figures like DeBlasio, Schumer, Nadler, and others wouldn’t want to be in that spot. But it may just come to that.