You are here: Home / Open Threads / Further To The Be Careful What You Wish For Chronicles

Yup.  I know this is the type specimen of a first-world problem, but oy, the kitchen renovation blues.

Demolition started on Monday.  Those guys are amazing:  a 7 a.m. we had a fully functional, intact (crappy) kitchen.  By eight?  Bam!

8:15 and the water line to the second floor exploded.  Around 8:45 we had the flood mostly under control, without too high a tide in the basement. And so it goes.

We’re going to be down a kitchen and the master bathroom upstairs for ~three months.  We’re treating the time as a camping trip.  That’s close to right, but what I forgot was what it was really like on those family car-camping trips way back when.

Let us simply say that lack of all mod cons did not reliably bring out the best in the four-kids-two-dogs-parents collective.  We’ll see.

But there are definitely rewards to the process (as we hope there will be at the end of the road…).  You get to play a grown-up version of the old Art Linkletter game:  pre-historic contractors did the darndest things.  Our house dates from 1920, which puts it right smack in the middle of the “what the hell should we do with this stuff called electricity” era.  As we found when we got the kitchen wall open: 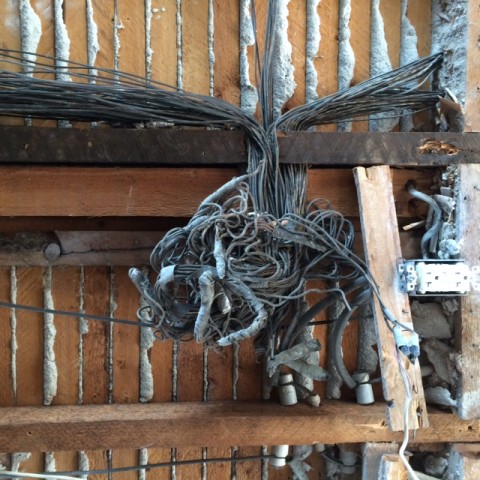 I guess all this adds up to a lunchtime open thread.

Update:  Here’s a link to the story of the bees that friend and commentor Aimai mentioned.  This is a house with its own particular take on the world, is all I’m saying.

And to the range of comments below: Yes, we are doing at least some rewiring.  No, we had no idea that this was lurking.  We have done some prior electrical work, and though we knew we had some knob-and-tube stuff in the house (and replaced some of it) we were not looking for this.

My favorite house repair story on this place (besides the bees)?   Our emergency disconnection of the live gas lines that had served the gas lighting system the house had in parallel to its electric lighting network.

The lights themselves were long gone, and usual practice when you take something like that out is to turn of the gas at the main, cut feed at the valve where it enters your house, and cap it properly with a big honker screw-mounted metal cap.  It’s a plumber’s job, not a big one, but definitely not something for the average home owner to mess around with.  What did some previous owner do?  Remove the gas light fixtures and stuff some plumber’s caulk in the pipe ends.

We found this out as our electrician was wiring the kitchen ceiling for a track, and opened up the little circular plate in the ceiling where some fixture had previously lived.  He found two live naked wires and a gas line — out of which a plug of caulk promptly fell.  The gas spewed out, and our guy never moved so fast, throwing himself off the ladder and getting out of there, sounding the warning to everyone else.

There were, by the way, about five or six workers in the house, using power tools, sawing, hammering, plumbing. No chance of a stray spark there, oh no.  None at all.

Alls well that ends…everyone cleared out of the house. The fire dept. and the gas company came by. The line got cut and capped as it should have been, all done before nightfall.  But I still shudder sometimes, thinking about how this house could have literally blown up — likely taking much of the block with it — at more or less anytime over the last who knows how many decades.