Amidst all the (justified) celebration of Rosetta and Phylae today — it really is a big deal when a ten year mission ends with the first landing on a comet evah!) — there  was one truly sour note.  This: 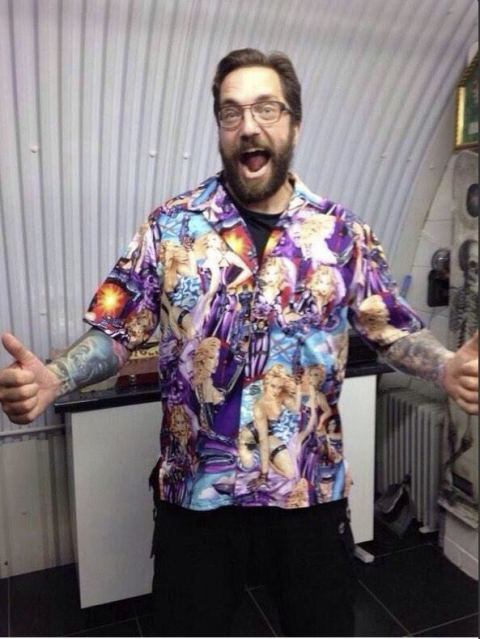 That’s Matt Taylor, Rosetta project scientist.  If you read the profile at (where else) The Daily Mail, you’ll get two impressions. One, that Dr. Taylor really loves his job, his science and this mission — all of which is great.  But two:  he and his interviewer are oblivious about what it might mean to stand in front of millions of science fans, wearing that schmatte.

Nah, this is just dudebro fun, no worries, no-harm-no-foul, why don’t you have a sense of humor stuff.

But it’s not.  There’s not a lot to say that isn’t f**king obvious.  This was and is a truly special occasion.  Lots of people thrilled to witness human reason and ingenuity reach towards the stars have been playing really close attention. Many of them are women.  Some, lots, are girls who might be thinking science could be a really fine life’s work.  That shirt tells them, pretty explicitly:  science ain’t no crap-free zone.

I’ve had friends, women in science, contact me today, asking when this shit will ever stop.  I don’t know.  Not soon enough.

My son is taking his first high school physics class this year.  Last night I was helping him with his homework on momentum, impulse and collisions — kind of relevant to today’s events.  I don’t know if his teachers broke with the curriculum today to watch the Rosetta live feed, but now I’m almost hoping they didn’t.  The girls — and the boys too, dammit — in that class deserve better.

I’ve never met Taylor.  I wouldn’t be surprised if he’s against discrimination in science (or anywhere else),  one who would defend any woman on his team.  I don’t know.

Maybe he’s just clueless stem to stern, with no idea how what he might say or do affects anyone around him.  Or, in fact, he could be a sexist asshole.  Still don’t know.  I generally, perhaps naively, default to that “clueless” rather than “f*cked-up” explanation, until I have affirmative evidence to the contrary.

But as we’ve learned over and over again in issues of race, of gender discrimination, of same-sex rights, it’s not what you believe that matters.  It’s what you do — and Taylor chose to wear this shirt in front of the largest audience he’s ever likely confront.  He may or many not be a sexist guy; he did a sexist thing, one with real world implications.

Repair work is needed.  The ESA/Rosetta folks should to do some, and so should Matt Taylor, however much of a goof he thought he was having.

Oh, and just in case he might accept some fashion advice, here’s Skepchik’s Dr. Rubidium with some very good natured suggestions.  A possible path to improvement lies there, Dr. Taylor.