Wasn’t the best year, wasn’t the worst year, and I had only one injury related hospital visit (and it didn’t require surgery!), so it wasn’t too bad, I guess.

This year, I said I was going to quit drinking, and I did. So for next year, I am going to lose weight and to stop being such an asshole all the time (thinking of a particular tweet in really poor taste last night). Let’s make it two and up my game.

Thanks for everything, some of you people are swell. The rest of you, well.

I’m gonna go eat ginger snaps w/ milk, watch some Homicide Hunter with Joe Kenda or maybe that new Denzel movie on PPV, and pet the piglets. Shawn is out on the town with his new hotness that he is pursuing, so it’s just me and the animals.

Enjoy your hangover tomorrow, kids! And don’t forget to eat pork and sauerkraut for good luck. I already have mine ready to go in the slow cooker tomorrow at 6 am when Steve wakes me up for his breakfast.

END_OF_DOCUMENT_TOKEN_TO_BE_REPLACED

Wondered if I should’ve left the Sydney display for Sarah Proud & Tall to front-page, but by this time I assume she’s passed out in the penthouse, probably atop a bed of mixed pharmaceuticals and under several attractive young people of genders even Facebook can’t tally.

I read that Netflix has an on-demand streaming countdown video available for parents of young children who can’t bear the wait until midnight, but when I tried to test it Netflix wanted me to install Silverlight for the 4,327th godsdamned time and I just don’t care that much, sorry small undiscerning children.

Assuming you’re still conscious at midnight in your locale, will you celebrate by throwing furniture out the window, setting fires, putting on brightly-colored underwear?

END_OF_DOCUMENT_TOKEN_TO_BE_REPLACED 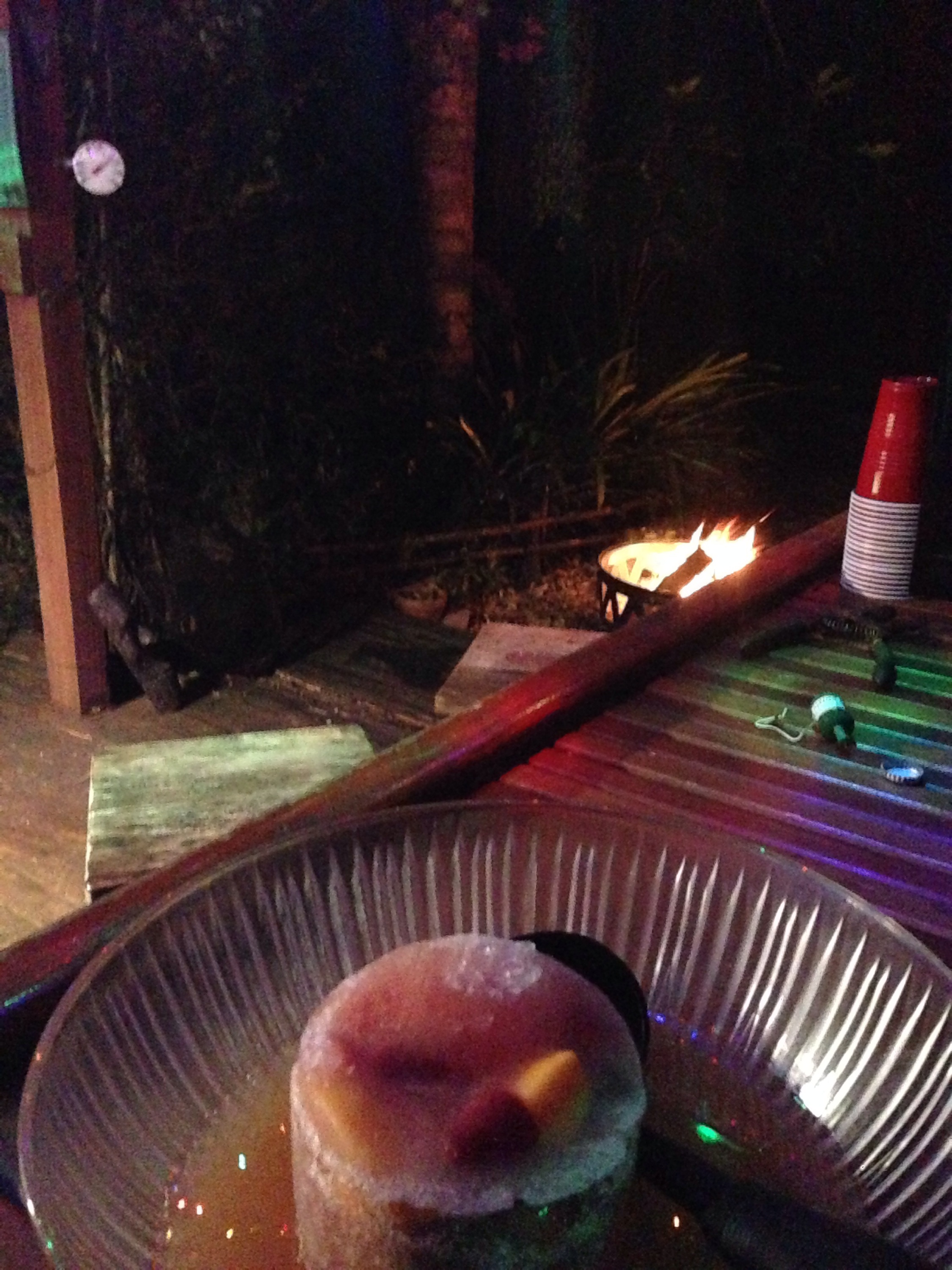 We’re hanging out at our backyard tiki bar as usual — wild horses couldn’t drag us out on the roads on Amateur Night. It’s cool enough for the fire pit, but just barely, about 60-ish.

The local yahoos are putting on quite a fireworks show, and the dogs are glued to my shins from the anxiety of it. Neighbors are dropping by singly and in pairs from time to time, but mostly it’s just us chickens.

The Tampa Bay area has a non-commercial radio station — 88.5 (Wmnf.org) — that has a fun New Year’s Eve program on, so we’re listening to that. That’s about it.

Hubby will never make it to midnight, so I’ll be ringing in 2015 with the kid and dogs and any intrepid neighbors who are still out and about. Then tomorrow I’ll veg out and watch football all day. You?

END_OF_DOCUMENT_TOKEN_TO_BE_REPLACED

I’m not sorry to see the back of 2014, which was the worst year of my life so far by a country mile. And yes, I realize the suckage wasn’t the fault of an arbitrary planetary orbit measure and that 2014 was just goddamn peachy for many people, and huzzah for them; my point is it sucked for me and I won’t remember it fondly.

I also realize that complaining about how much 2014 sucked might be construed as a cosmic invitation for 2015 to hook me on its horns. But I’m not particularly superstitious that way, so I say again, FUCK OFF, 2014: 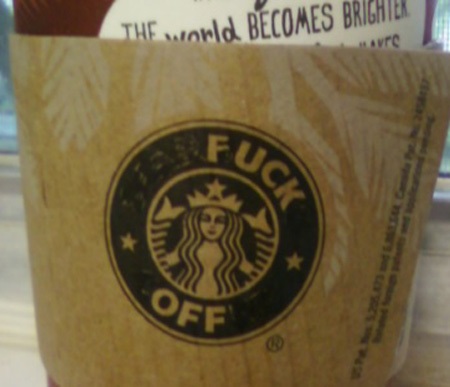 But even if 2014 showered you with good fortune from January 1 to the present day, surely there are people, items, trends, events and news stories from 2014 that you’d be glad to never, ever hear of again? Feel free to share them here in a cleansing purge. Or talk about whatever.

END_OF_DOCUMENT_TOKEN_TO_BE_REPLACED

The mother who was shot and killed by her two year-old toddler, who pulled the gun out of mom’s purse while they were shopping in Wal-Mart, has been pretty well discussed in the comments. Here’s one thing some of you might have missed — this isn’t the first time that it’s happened this year:

In November, a woman in Oklahoma was fatally shot by her three-year-old with a semi-automatic handgun. Police said it appeared the child picked up the gun while his mother was changing a one-year-old’s diaper.

That’s from The Guardian, which sent out a breaking news alert when this story broke yesterday, probably because the ‘Murica factor of a two-year-old killing his mother with her concealed weapon in a Wal-Mart was pure clickbait for Brits who already think we’re a bunch of gun-toting hillbillies.

I hate to knock the relatives of someone involved in a tragedy, but this comment by the victim’s father-in-law encapsulates the attitude that will lead to many more incidents like these:

“She was not the least bit irresponsible,” he said. “She was taken much too soon.”

If a two-year-old can get hold of your gun and discharge it, you’re being irresponsible. The “taken” part makes it sound like it was just another unavoidable “act of God”, which it wasn’t. It was a completely avoidable consequence of open carry culture. You just don’t need to carry a gun in your purse to protect yourself in the Hayden, Idaho Wal-Mart.

END_OF_DOCUMENT_TOKEN_TO_BE_REPLACED

Today I looked at my 2014 Pets of Balloon Juice Calendar and realized that it would be as worthless as Lanny Davis’ loyalty or Mark Penn’s advice, starting tomorrow. I said to myself, “Where the fuck is the new Balloon Juice calendar that I ordered on the day it came out, goddamit?”. I searched my email and could only find shipping notices from years past. It was then that I realized the gravity of my mistake: I had not, in fact, ordered the 2015 Pets of Balloon Juice Calendar. Therefore, I will have to risk damaging my eyesight by squinting at the little January box on the December calendar until the new one that I ordered this morning arrives.

Perhaps some of your are in the same position. My advice is to start drinking early to deal with the self-loathing and shame generated by your reckless stupidity. But, before using demon rum to transport yourself to a place where your idiocy no longer matters, click here to order a new calendar. It is a labor of love and a quality item.

As partial atonement for my lack of speedy calendar buying, I offer up this open thread.

END_OF_DOCUMENT_TOKEN_TO_BE_REPLACED

On this date, many people worldwide mark the completion of one trip around the sun and the beginning of a new one. For some, thoughts turn to new beginnings and opportunities for self-improvement in the form of New Year’s resolutions.

I’m not among that group; I know from bitter experience that my tragic willpower deficiency will shatter my resolutions long before MLK Day. But I don’t object to crafting resolutions for others, so here goes:

1. John Cole should resolve to adopt another Maine Coon kitty cat. Moreover, he should name the cat “Mrs. Norris” (whether male or female) and entice it to perch on his shoulder in the manner of the pet cat belonging to Hogwarts caretaker Argus Filch in the Harry Potter books and films. This would not only cement Mr. Cole’s reputation as the town eccentric, it would undoubtedly give rise to amusing stories about how Mrs. Norris helped Mr. Cole avert household disasters and repel unwanted visitors.

2. Hillary Clinton should resolve to publicly disown Mark Penn, Lanny Davis and Lady Lynn Forrester de Rothschild. If HRC is to be our nominee in 2016 (still an open question), I believe that despite early grumbling, she’ll have Obama 2008 voters like myself firmly on board. That said, the media will overplay Obama voter discontent, much as they relentlessly hyped the PUMA phenomenon in 2008 (which ultimately proved as consequential as a fart in a whirlwind). Still, HRC could throw us Obots a bone by repudiating the three above, who, while they certainly aren’t the only assholes in “Hillaryland,” would constitute a good faith gesture were they publicly kicked to the curb.

3. President Obama should resolve to relentlessly troll the GOP for the rest of his term. Pundits have already noted that PBO’s post-midterm executive actions have riled opponents, but that’s not really trolling — that’s just doing his job. What I mean is identifying hot-button issues that only the GOP base reacts to in a foolish manner and lighting the troll lantern just for them. When he was still a US Senator, PBO said he wanted to be as transformational a president as Ronald Reagan was. Well, Reagan was arguably the most accomplished troll in presidential history, making sensible ideas like accommodations for disabled people and due process sound like something only smelly hippies and humorless prigs could support. Troll those motherfuckers right back, Mr. President.