You are here: Home / Politics / Politicans / Black Jimmy Carter / Optics Will Kill Us All 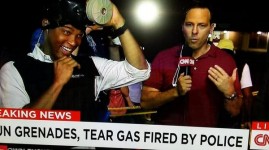 Today’s must read and laugh at:

“Thank you,” said the man. I was standing outside of the offices of Charlie Hebdo covering the aftermath of the terrorist attacks for CNN. He was thanking me just for being here, just for covering the event and its aftermath, what Le Monde referred to as France’s September 11. And his appreciation was echoed by French citizen after French citizen.

The rally Sunday for unity drew 1.5 million people in Paris and more than twice that nationwide; it was like nothing I’ve ever seen or covered. Our nation’s oldest ally stood firm. A young Muslim Frenchwoman held a sign saying “Je suis Juif.”

A man and his son came over to me holding a sign saying “I disapprove of what you say but I will defend to the death your right to say it,” beseeching me to share their message with the American people. And world leaders were standing together amidst a procession that included Francois Hollande of France, Angela Merkel of Germany, David Cameron of Great Britain, Mahmoud Abbas of the Palestinian Authority and Benjamin Netanyahu of Israel, along with the leaders of Mali, Jordan and Turkey.

It is no small thing for the king of Jordan, a direct descendent of the Prophet Mohammed, to march in a rally prompted by the murders of people who mocked Islam as well as of innocent Jews — all of whom were killed by Islamic extremists.

The United States, which considers itself to be the most important nation in the world, was not represented in this march — arguably one of the most important public demonstrations in Europe in the last generation — except by U.S. Ambassador Jane Hartley, who may have been a few rows back. I didn’t see her. Even Russia sent Foreign Minister Sergey Lavrov.

I certainly understand the security concerns when it comes to sending President Barack Obama, though I can’t imagine they’re necessarily any greater than sending the lineup of other world leaders, especially in aggregate.

But I find it hard to believe that collectively President Obama, Vice President Joe Biden, Secretary of State John Kerry, Secretary of Defense Chuck Hagel, Treasury Secretary Jack Lew and Attorney General Eric Holder — who was actually in France that day for a conference on counterterrorism — just had no time in their schedules on Sunday. Holder had time to do the Sunday shows via satellite but not to show the world that he stood with the people of France?

There was higher-level Obama administration representation on this season’s episodes of “The Good Wife” on CBS.

That’s Jake Tapper latching on to the latest plaintive wail by the wingnuts, and let’s face it, there’s a little Buzzfeed link-bait in all of us, amirite? At any rate, Jake knows something about shame, because he shares airtime with Don Lemon and Chris Cuomo. So I would say this is a shameless “look at me column,” but let’s face it, he works with those guys so he has at least a passing acquaintance with the concept.

I honestly wonder if journalists think they are having a Walter Cronkite moment, speaking truth the power, when they write this kind of nonsense. Speaking of, Mr. Tapper was with ABC News throughout the Bush years, and goshdarnit I just don’t recall any long feature length columns admitting he was ashamed of the Bush administration torture program. I may have just missed it.

History is not going to look kindly on the last few decades of journalism.