The Quiet American  is a marvelous book, or rather, it is one in which Greene’s utter disdain for the reckless incompetence of power gets a near perfect expression.  Take this snippet from near the end of the work:

Pyle said, “It’s awful.” He looked at the wet on his shoes and said in a sick voice, “What’s that?” “Blood,” I said. “Haven’t you ever seen it before?” He said, “I must get them cleaned before I see the Minister.” I don’t think he knew what he was saying. He was seeing a real war for the first time: he had punted down into Phat Diem in a kind of schoolboy dream, and anyway in his eyes soldiers didn’t count.

“You see what a drum of Diolacton can do,” I said, “in the wrong hands.” I forced him, with my hand on his shoulder, to look around. I said, “This is the hour when the place is always full of women and children-it’s the shopping hour. Why choose that of all hours?” He said weakly, “There was to have been a parade.” “And you hoped to catch a few colonels. But the parade was cancelled yesterday, Pyle.” “I didn’t know.”

“Didn’t know!” I pushed him into a patch of blood where a stretcher had lain. “You ought to be better informed.”

“I was out of town,” he said, looking down at his shoes. “They should have called it off.”

“And missed the fun?” I asked him. “Do you expect General The to lose his demonstration? This is better than a parade. Women and children are news, and soldiers aren’t, in a war. This will hit the world’s press. You’ve put General The on the map all right, Pyle. You’ve got the Third Force and National Democracy all over your right shoe. Go home to Phuong and tell her about your heroic deed-there are a few dozen less of her country people to worry about.”

A small fat priest scampered by, carrying something on a dish under a napkin. Pyle had been silent a long while, and I had nothing more to say. Indeed I had said too much. He looked white and beaten and ready to faint, and I thought, ‘What’s the good? he’ll always he innocent, you can’t blame the innocent, they are always guiltless. Ail you can do is control them or eliminate them. Innocence is a kind of insanity.’

He said, “The wouldn’t have done this. I’m sure he wouldn’t. Somebody deceived him. The Communists…”

He was impregnably armoured by his good intentions and his ignorance… 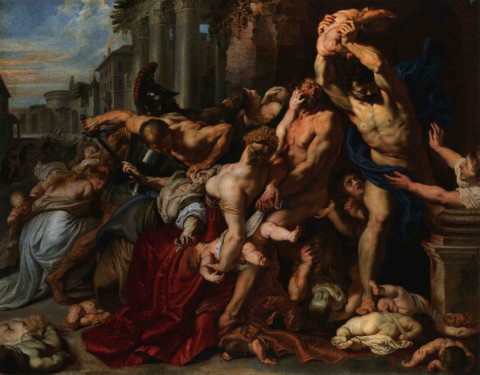 “Impregnable armoured by good intentions and ignorance.”  That is what will — or at least should be — engraved on David Brooks’ tombstone.  And I’m only giving him the props for his intent there out of whatever residual nil nisi bonum remains to me.

Why the vitriol, and memory of stupid wars, with the overwhelming weight of the violence reserved for far away others who don’t look like “us”?

I’m not going to fisk at length, [ETA:  I lied] but hoo boy, was Brooks’ effusion the epitome of the awful that forms the beating heart of his work.  You could tell it was likely to fly fast and far off the tracks from the topic sentence.  Our man David had decided to weigh in on foreign affairs — nay, military strategy! — in the Middle East.  As a man who knows very little about not much, leaving the shores of his adopted country is always a risk.  As it proved to be.

Actually, it didn’t take any time with the text to trigger the klaxons.  The headline does that:  “Being Who We Are.”

Hoo Boy again.   I leave aside the low-hanging fruit, and refrain from asking if the who “we” are he has in mind are those who meddled in the succession in Iran and Saudi Arabia; those who invaded the Dominican and propped up the Docs, father and son, or those who conspired against Allende and Diệm, or who trained Pinochet’s men…and you get the idea, all the overt and covert bloodshed in the service of real politik.

That’s not, of course, what Brooks has in mind.  Rather, its the failure to fully arm Syrian rebels that has him exercised, his ardour fueled by a report in the Wall St. Journal that chronicles the gap between promised weaponry and deliveries.  Here’s Brooks:

The rebels asked the C.I.A. for ammunition to take advantage of temporary opportunities, but the C.I.A. sometimes took two weeks to decide. The U.S. gave the rebels money to pay their troops, but they only gave them $100 to $150 for each fighter per month. The Islamic State paid its fighters twice that.

That is to say, Brooks is deeply concerned because he thinks the US has worried too much about handing weapons to people who may turn around and use them on us or our friends. Which is totally not something to worry about because that never happens.

Brooks does admit that there might be just a bit more to the calculation than bean counters at the CIA:

Now, Syria is obviously a viper’s pit in a region where the choices normally range from the appalling to the horrendous. But there are ways to approach problems in this region, and there are ways not to.

OK.  Banal though that thought might be, it isn’t on its face completely risible.  What, pray tell Mr. Brooks, are the right ways to handle the vexed matter of attempting to influence internecine conflict in the Levant?

Spoiler alert!  It’s simple.  We just have to stick to our values:

The Middle East is not a chessboard we have the power to manipulate. It is a generational drama in which we can only play our role. It is a drama over ideas, a contest between the forces of jihadism and the forces of pluralism.

Oh, holy shit on a stick.  There isn’t a vomit bucket big enough to contain my bile at the “it is a drama over ideas” line.  That’s disqualifying full stop.  Every single reporter at the Times who has ever worked the Middle East beat — hell anyone there who’s spent time on the ground of any conflict, who’s spent time studying the actual lines of tension, the politics of violence, anything of the substance of what the real people at the point of action are doing — this is the time all of those people are planting faces so forcefully into their desktops that their office furniture now resembles this.

What’s happening in Syria isn’t a drama or a contest.  It is a vicious, horrific war in which real people are suffering, acting, performing acts of utter brutality and enormous courage or compassion, trying to live daily life and all the rest.  It is not some fantasy of an utterly coddled wealthy foreigner dreaming Kiplingesque dreams in house blessed with vast spaces for entertaining.

But I fulminate.  Onwards!

We can’t know how this drama will play out, and we can’t direct it. We can only promote pluralism — steadily, consistently, simply.

Which, on the ground, means…this:

Uhhh. Not to put too fine a point on it, see Graham Greene above.  “a simple posture of support” is what you do when you don’t know what you’re doing and you don’t care.  See also the seemingly difficult-for-Brooks-to-grasp concept that people elsewhere have values of their own, and interests, and alliances, and ambitions, and all kinds of things that shape their view of the world and program of action within it.  For the ultimate idiocy of the Boo-Yah-Democracy approach to covert or overt military action, see George Bush/Dick Cheney’s wonderful Iraq adventure, 2003-whenever.

Does any reflection on our recent past deter our BoBo?

A rhetorical question.  Of course it does not:

It means offering at least some reliable financial support to moderate fighters and activists even when their prospects look dim. It means avoiding cynical alliances, at least as much as possible.

Holy Moly Mother Of FSM!  David Effing Brooks wants the United States of American to avoid cynical alliances “at least as much as possible.”  Where to begin? (House of Saud?….ed.)  Or rather why bother.  That “as much as possible” loophole makes the Citizens United decision look like a firewall between money and influence.  It is to laugh — but only because we are too big to cry.

But wait! There’s still the punchline: 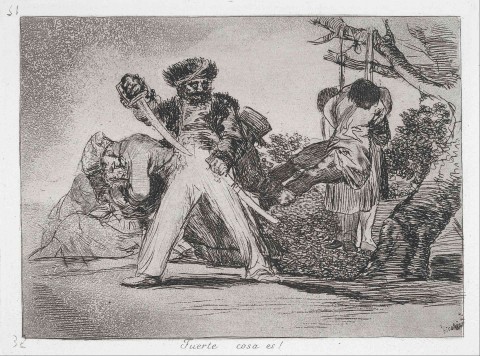 IOW:  With that the last zombie reincarnated ghost of irony squeaked, and breathed its last.

Snark aside.  I cannot properly describe the deep loathing I feel for the moral crater contained within that sentence.  Bombing campaigns are occasions of mass slaughter.  The armchair warriors of the fighting 101st Keyboard Brigade may love the fantasy of precisely delimited violence delivered from a distance, but dead brides and slaughtered children give the lie to the notion that lasers and remote sensing have somehow enabled US explosives to distinguish on impact between bad guys and bystanders.  To belabor the obvious:  even when you hit exactly what you want, hundreds or thousands of pounds of high explosive are not exactly precision instruments of state power.  Brooks seems ignorant of this fact, or, more likely unbothered.  After all, when we stick to our values…

we will fortify people we don’t know in ways we can’t imagine.

And at least some of those will be fortified to think long and hard about the people who just bombed the crap out of them…but I digress.

Over the long term, we’ll make the Middle East slightly more fertile for moderation, which is the only influence we realistically have.

Here we revert to Brooksian fatalism.  Odd, but what I think is the bedrock of his reflexive Republicanism.  As any action is essentially futile, we must bow to our overlords in this best of all possible worlds.  That trade, education, financial maneuvers ….anything might have an impact on ourselves and others seems simply not to have occurred to him.  Bizarre.

But you can’t keep a bad thinker down for long.  Here’s the capstone of the Brooks’ view of the Middle East:

Not colonial borders.  Not contingencies of politics.  Not fundamental economic parameters like, for example, youth unemployment or the pathologies of extractive economies. Not…hell — this is the same notion as above.  Brooks is too lazy, to intellectually incurious, to persistently ignorant to probe the details of whatever it is that flickers within the limitless sunshine of his spotless mind to engage the issues on which he chooses to opine at any level a micrometer below the surface.

“Ideas drive history”!  If a first year undergraduate tried that on in an essay in one of my classes the line would be drowned in a sea of red, and a comment as long as this post would try to explain why cliches are not conclusions.  David Brooks, secure from any meaningful scrutiny (he’s bragged about ignoring comments, and he appears to have or brook no real editing) will be telling you how deeply concerned he is on your radio or teevee any moment now.  And he’ll be back again twice next week in the most valuable opinion real estate in the English speaking world.

David Brooks.  Meet Alden Pyle.  He’s got something to say to you.