Israeli PM Benjamin Netanyahu is hoping that congressional Dems can get him out of the gaping chasm he put himself in over his plan to visit Congress, and so far his pleas are falling on deaf ears.

Mr. Netanyahu’s office confirmed Thursday that he had called Democrats and “other friends” in Congress in recent days, and that he “reiterated that the survival of Israel is not a partisan issue.”

Mr. Reid, a strong supporter of Israel, said in an interview that he had had a candid conversation with Mr. Netanyahu. He said he had advised the prime minister that the speech, scheduled for March, had become such a problem that some Democratic senators had backed off their support of the quick imposition of new sanctions on Iran.

“It would have been wrong for me to say, ‘Don’t come,’ ” said Mr. Reid, who is recovering at his home in Washington from a serious exercise accident he sustained Jan. 1. “I wouldn’t do that.”

Ms. Pelosi said late Wednesday that when she spoke with the prime minister, she had stressed that the speech “could send the wrong message in terms of giving diplomacy a chance.”

Gosh, it’s almost like this too-clever-by half plan to “put Obama in his place” was such an overt insult that it blew up in Bibi’s face.  Doubly so since John Boehner is running as quickly as he can away from this so that Netanyahu and his ambassador to the US are the ones left holding the bag here, as Jeffrey Goldberg points out talking to Ambassador Dermer:

Goldberg: Democrats (including, and maybe especially, Jewish Democrats) believe that the prime minister is sometimes disrespectful to the president, and they worry that your government privileges its relations with the Republicans at their expense. Assuming you believe this is wrong, why is this wrong?

Nobody believes that.  There’s every indication that Bibi flat out despises President Obama and if Bibi going around him to speak to Congress as a foreign leader openly undermining the foreign policy of a sitting President isn’t intentional disrespect, there’s very little that does qualify.

And now the guy is scrambling to try to find some way to save his own ass, because he full well knows what the consequences are as the Palestinians decide to take their grievances to the International Criminal Court rather than the UN.  He knows he needs the United States, and right now nobody will give him the time of day.

Can’t say he doesn’t deserve it.

END_OF_DOCUMENT_TOKEN_TO_BE_REPLACED

Yesterday afternoon, I was complaining about the rising repair bill on my 16-year-old’s car, which had been in the shop for a few days. They kept finding new things that were wrong with it. I picked it up yesterday evening. The final bill topped out at $1,400 and change.

The kiddo had been driving my car to school and to after-school activities this week since her vehicle was in the shop. Yesterday was a late day for her since she had sports practice and then had to haul several schoolmates around to complete some class project, allegedly.

Somehow during that excursion, she managed to lock the keys to MY car in the trunk while all the way across town. When she called us for help, I decided I’d drive the extra set of keys to my car over in her car and then reclaim my vehicle.

Her stupid car was on empty because of course it was. When I stopped to gas up, I noticed this sign: 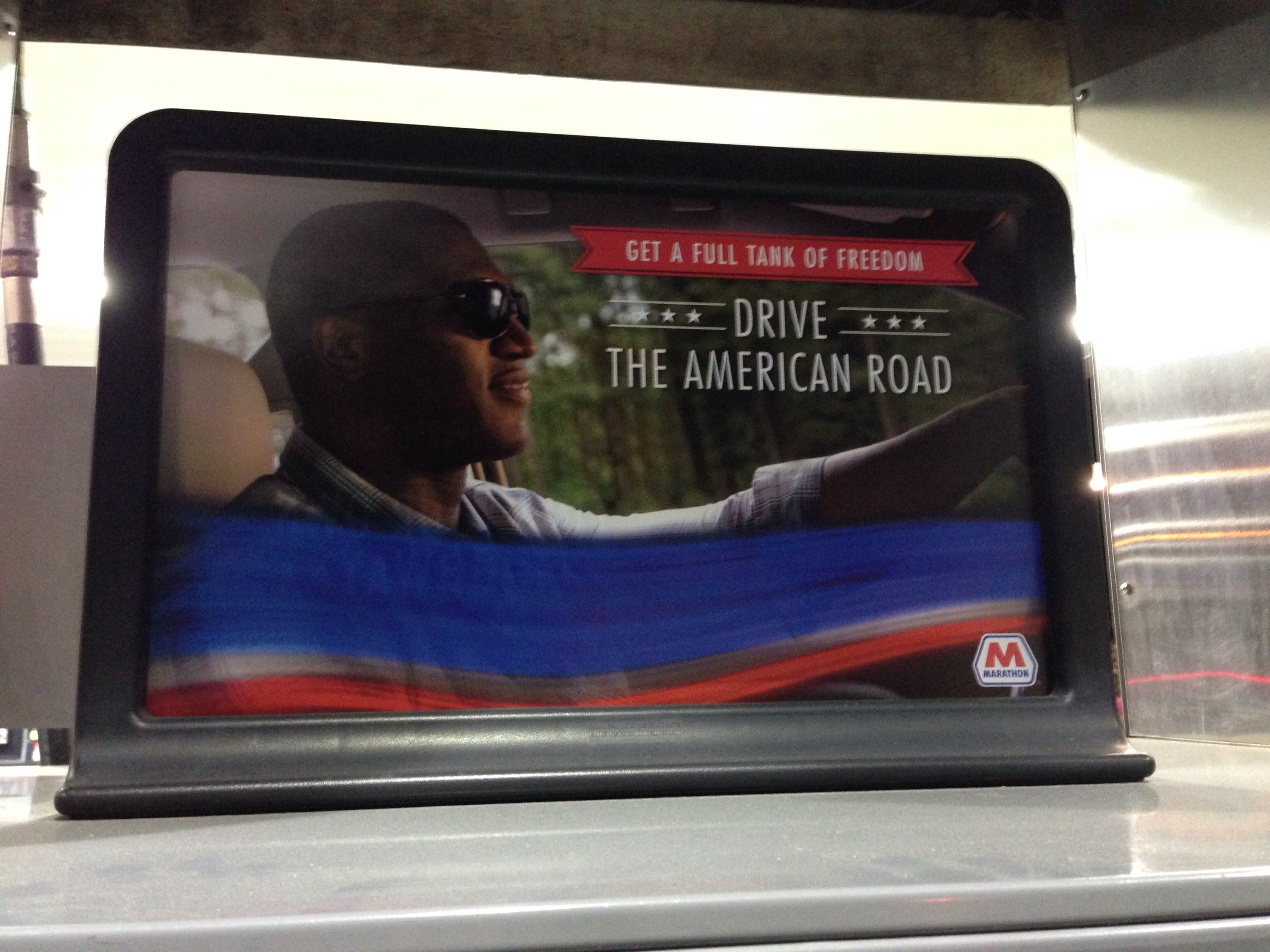 Naturally, when I fetched my car, it was on empty too, so on the way home, I had to stop for even MORE freedom. Goddamnit.

I can’t sleep, so I was half-watching Rachel Maddow on rebroadcast, half-reading something awhile back, and unless I’m very much mistaken, I think Rachel was urging Senator Claire McCaskill to run for president if HRC stays out of the race. Whaaaa?

I can’t believe it’s Friday already, but yay, I guess.

ETA: I found out the hard way many years ago that it’s inadvisable to drive through an automatic car wash with dogs in the car (they go berserk). But being from a state where, if you dig a hole, it immediately fills up with water, I was unaware of the effect tunnels have on babies until I saw this delightful compilation, courtesy of Gawker:

END_OF_DOCUMENT_TOKEN_TO_BE_REPLACED

For the past day or two, I’ve been seeing some very inexplicable-even-by-twitter-standards stuff on the tweetstreams. David Roth at Vice Sports finally explained this new “thing” for me, and you:

It’s greatly to Twitter’s credit that no one has yet figured out a productive use for it… It is a place to flush our puns and dispose of our surplus thoughts and spoonerisms, and that is valuable, but there is the question of what all those words are actually worth. Are they just millions of plastic bags clotting the virtual ocean? Or are they poems, each of them, waiting to be read as such?

Ha, just kidding, it’s the “millions of plastic bags” thing for sure. But the site Poetweet is doing its best to advance the idea that there’s some poetry hidden in our Twitter feeds, and uses an algorithm (presumably) to mine old tweets, chop them into iambic pentameter, and turn them into poems. If you can handle soaking in your own fragmented mundanities, you should absolutely try it yourself…

Since I am only a twit-lurker (I can get into enough trouble just with FYWP, thanks) I tried feeding Poetweet “inspiration” from our Blogmaster…

Behind that
by John Cole
Meat for his drooling readers?
Out of bounds to get to the one.
Is too small for my fat fingers.
By next week he will act alone.
Decisions. What is a “deportable?”
In next generation power sources.
This is on SNL, but it is horrible
That Judy Miller’s WMD pieces.
That everyone is a sociopath.
Detroit got J O B JOBBED.
Condemn the turkey to death…
.

(Yes: If this, my fellow Juicers, cannot attract a bigfooting puppy-update post from Himself…. well, I’ve done my best.)

END_OF_DOCUMENT_TOKEN_TO_BE_REPLACED

…. “I know what you’re going to ask about!” said McCain. Indeed: The press wanted to talk to McCain about South Carolina Senator Lindsey Graham’s launch of a presidential exploratory committee. McCain, who considered Graham as a 2008 running mate before picking Sarah Palin, had “strongly encouraged” Graham to run. He also credited his friend fully with the decision, and started warning 2016 rivals of what was coming…

McCain talked through the ways that Graham could win an “uphill battle” against rivals with “lots of money.” Graham, said McCain, had an “unmatched” record on national security when the country needed an expert in the White House. “Senator Graham is known in New Hampshire and he’s best in the town hall setting,” said McCain. “I’ve down town halls with him—I’ve watched him at those meetings. He’ll be able to do well in New Hampshire.”…

… Did he, for example, think Graham was more qualified to be commander in chief than Mitt Romney, whom he’d endorsed at the start of the 2012 primaries?

“Yes, I do,” said McCain, “but I’m not being in any way critical of Mitt Romney or anyone else who may be running. I just think that Lindsey Graham at this time in history is best suited to address threats to our national security.”

McCain’s enthusiasm seemed to outstrip that of Graham himself. After a Senate vote, the South Carolina senator checked his phone, then re-broke his news to reporters…

The first time a scary dark-skinned Muslim (Keith Ellison, say) gave would-be-President Graham so much as a cutting look, Lindsey would soil himself. But apart from gently buffing Graham’s own credentials as a Serious Foreign Policy Expert, this “exploratory committee” gives John McCain a reason to hang around the 2016 primaries… and the Media Village another excuse, as if they needed one, to invite McCain to show up for the Sunday Bobblehead yakfests.
***********
Apart from mocking the endlessly mockable, what’s on the agenda for the evening?

END_OF_DOCUMENT_TOKEN_TO_BE_REPLACED

Someone picked a great time to make himself unavailable.

Over the last few months, following The New Republic’s centenary anniversary and a staff shake-up, a perceived legacy of racism in the magazine has been the topic of intense arguments, mostly carried out online. In the wake of the debate, vexing questions demand answers: How do we reconcile the magazine’s liberalism, the ideology that animated the Civil Rights revolution, with the fact that many black readers have long seen—and still see—the magazine as inimical and at times outright hostile to their concerns?

The New Republic owes an accounting to itself, its critics, and its readers; an honest reckoning on where it has gone wrong is the necessary first step to figuring out how to do better.

[…] The magazine’s myopia on racial issues was never more apparent than in Peretz’s and editor Andrew Sullivan’s decision in 1994 to excerpt The Bell Curve, a foray into scientific racism in which the authors, Charles Murray and Richard Herrnstein, asserted that differences in IQ among blacks and whites were largely genetic and almost impossible to significantly change. The book had not been peer-reviewed, nor were galleys sent to the relevant scientific journals. As The Wall Street Journal reported, The Bell Curve was “swept forward by a strategy that provided book galleys to likely supporters while withholding them from likely critics.”

If you read only one more thing about Charles Murray and his works, make it this epic investigation of the data by Ron Unz at AmCon; read his follow up here if you still feel hungry at the end. Unz answers Murray and his crows in what I feel is the most effective possible manner – by accepting the data of Richard Lynn in good faith and subjecting it to an appropriate panel of alternative hypotheses. As it turns out Lynn’s data has almost nothing to say about IQ but it has quite a lot to say the IQ test and what it measures.

END_OF_DOCUMENT_TOKEN_TO_BE_REPLACED

Move over, Girl Scouts, cause the Radical Brownies are where it’s at. The group, which was started last month in Oakland, CA, by Anayvette Martinez and Marilyn Hollinquest, are all about social justice and self-love:

They are young women of color between the ages of 8-12 years old. They are not affiliated with Girl Scouts of America, and have their own badge system including one for “Radical Beauty” and an “LGBT ally” badge, reports Fusion. … In the Radical Brownies, girls learn about social justice movements such the Black Panthers and the Chicano group, Brown Berets (to whom they wear their own brown berets in homage), reports Fusion.

The group hopes to start chapters all over the country and we really hope it takes off.

Team Blackness discussed another step in the government eradicating homelessness, a drone crashing onto White House grounds, and a women who went out for coffee and came back to her husband bulldozing her home, and

END_OF_DOCUMENT_TOKEN_TO_BE_REPLACED

So I took my daughter’s car to the shop for a very minor repair two days ago, and now we’re up to $1,200. Feckity fuck.

Open thread. Please feel free to use it to berate me for my taste in music.