You are here: Home / Organizing & Resistance / Fables Of The Reconstruction / Appomattox Day

On which that genteel butcher Bobby Lee, surrendered the Army of Northern Virginia to General Ulysses S. Grant. 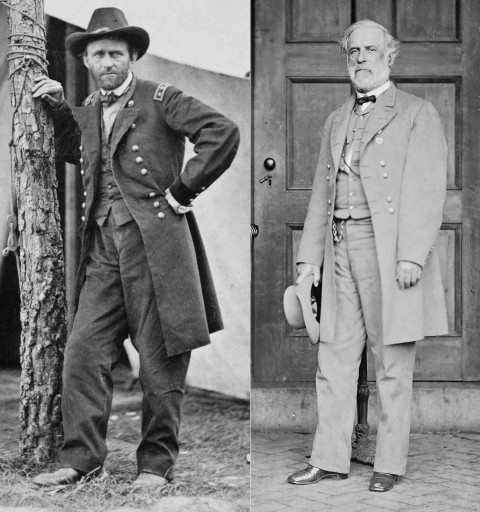 Grant’s terms have generally been regarded as generous, to the point that the military leaders of the rebellion were spared the threat of criminal trials for the actions in defiance of properly constituted Federal authority.  Looking forward, not back, is no new trope in American politics.

In any event, my view of the Civil War echoes Sherman’s:  “secession was treason, was war…”

Apologists for the Lost Cause trump up the usual counters — I’ve just been batting this around with a wistful mythologist on Twitter.  The battle wasn’t for slavery, but state’s rights; the men under arms weren’t traitors — they were just soldiers fighting other men’s battles, or for a misguided but sort-of reasonable goal; and so on.

It is vital, I believe, to push back on that nonesense.  That’s not how those at the time saw it, not when it got down to the nub.  Lee’s Army of Northern Virginia was a slave holder’s army, and the documents with which the makers of the Confederacy declared their cause made the reason for secession clear.  State’s rights were the means to the real end:  the permanent power to hold other human beings as property:

For twenty-five years this agitation has been steadily increasing, until it has now secured to its aid the power of the common Government. Observing the forms of the Constitution, a sectional party has found within that Article establishing the Executive Department, the means of subverting the Constitution itself. A geographical line has been drawn across the Union, and all the States north of that line have united in the election of a man to the high office of President of the United States, whose opinions and purposes are hostile to slavery. He is to be entrusted with the administration of the common Government, because he has declared that that “Government cannot endure permanently half slave, half free,” and that the public mind must rest in the belief that slavery is in the course of ultimate extinction.

This sectional combination for the submersion of the Constitution, has been aided in some of the States by elevating to citizenship, persons who, by the supreme law of the land, are incapable of becoming citizens; and their votes have been used to inaugurate a new policy, hostile to the South, and destructive of its beliefs and safety.

That is: only reason secession occurred is because the South finally lost an election.

It is in that context that April 9 is a great day.  Certainly, too much was left undone.  Too much remains undone.  But at Appomattox, the traitor Robert E. Lee’s surrender enshrined at least the possibility that Federal authority could remedy grievous wrong.  And that’s cause for remembrance of a great hope kindled, and of the too-long wait, still ongoing, for its fulfillment —  what Abraham Lincoln saw as the course forward from the moment of surrender:

With malice toward none, with charity for all, with firmness in the right as God gives us to see the right, let us strive on to finish the work we are in, to bind up the nation’s wounds, to care for him who shall have borne the battle and for his widow and his orphan, to do all which may achieve and cherish a just and lasting peace among ourselves and with all nations.

Image: Montage of these two photographs:

Previous Post: « Beyond Peanuts & Cracker Jack (Open Thread)
Next Post: Open Thread: Chafee 2016 – Because Why Should All the Clowns Be on the Repub Side? »