The other day I was thinking about dumb TV show pitches, and the first thing that popped into my head was ‘Game of Thrones in space’. You know what? I would watch the shit out of that show. Tell me literally nothing else and I will give at least the first couple episodes a try. All of this in spite of the fact that George R.R. Martin is a son of a bitch who makes you fall in love with an adorable puppy and then has it run over in the street and then set on fire, scraped off the pavement by a puppy mill owner and sold for medical experimentation. Kirkman made me give up comics at the end of the prison arc in Walking Dead (it was even worse in the books) but somehow I’m still glued to that show. #notreallydead goddamnit.

In other news, below I have illustrated Max’s Fourth of July weekend in a nutshell. Doberman owners can testify that there is something a bit surreal about this pic. Dobes are brave enough, give or take individual quirks, they have a kryptonite thing about water. Young Max would stop dead the moment water reached his chest. It took a lot of patience and a willingness early on to wade out after water toys myself but he eventually got over it. By now Max is halfway to a Newfoundland, the main difference being swimming speed (those big newfie paws make great paddles) and he probably would not rush out to pull someone to shore unless I threw them in first. 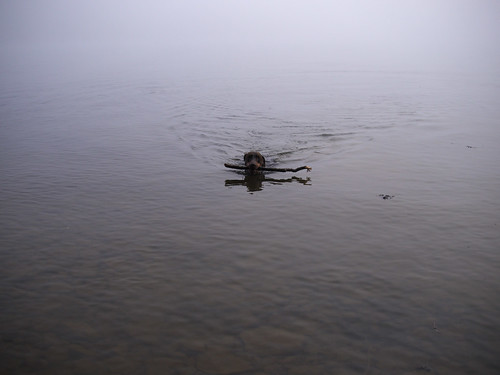