You are here: Home / Photo Blogging / A Dustbowl Where a Breadbasket Should Be

That big blue space west of the City of Baghdad, Mada’in Qada, was where I was deployed in Iraq. It is part of the agricultural belt that rings Baghdad. We also had an assumed risk are south of Mada’in in Wassit Province and, for about six to eight weeks, we had southern Diyala Province, which is just north of Mada’in. Eventually my Brigade Combat Team (BCT) also picked up Mahmoudiya Qada. This gave the Army’s non-modular, legacy brigade  the entire southwestern, southern, and eastern belt/approaches to Baghdad. That’s a lot of territory for 4,500 people to cover. Since this is going to be a photo/picture heavy post, I’m going to put most of it under the fold in order to not swamp the front page.

Mada’in, meaning the two cities, draws its name from Mercez Mada’in (the Center of the Two Cities), which was located where Salman Pak now is. If you see that little peninsula on the map, the Steya Peninsula, where the Tigris river is bisecting Mada’in and Mahmoudiya Qadas, Salman Pak is on the right side of the river. Apparently there was once a bridge or palace or underground tunnel or all three that spanned the river, hence the Center of the Two Cities designation. The Steya Peninsula is home to the Arch of Kesra/Kesra Palace, which is the largest freestanding mud brick parabolic arch in the world. Its on the World Heritage list and in October 2008 I was part of a team from the brigade, and from our infantry battalion in that area, that escorted an Assistant Secretary of State for Heritage on a visit to the arch. This was notable for two reasons: 1) this was the highest ranking Bush 43 Administration official to actually travel out of the Green Zone and 2) the US, as one could imagine, was very concerned that the arch not fall down or become damage while we were occupying the country as it is important to both the Iraqis and the Iranians. The Arch of Kesra, as seen from out the side of the Blackhawk I was riding in, can be seen below. 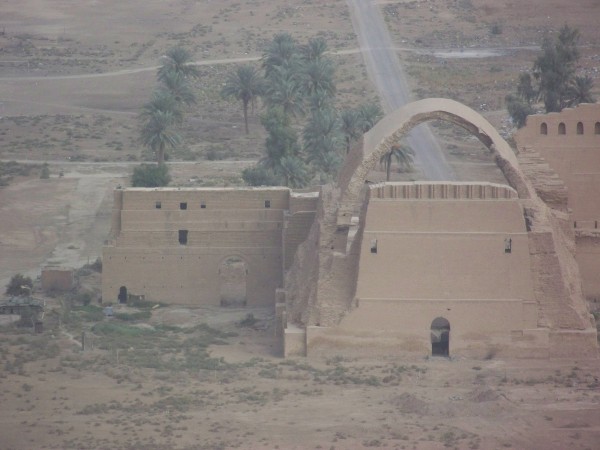 You can see that even here, which is less that two kilometers from the Tigris, its almost bone dry. Normally the tribe that lives in this area made its livelihood farming with water pumped from the Tigris. This was, unfortunately, impossible back in 2008 for two reasons: 1) the power grid was not in good condition, so there wasn’t a lot of energy/electricity for the pumping stations to work consistently (more on this in a bit) and 2) an Iraqi Army Tank Battalion had occupied the Steya Peninsula, largely squatting on the tribal farming lands, as part of their defensive position to interdict extremists trying to reach Baghdad.

Salman Pak is also famous for the Salman al Farsi Mosque. Salman al Farsi, sometimes referred to as Salman the Barber, was a companion of Prophet Muhammed and was his barber. While Salman never converted to Islam, he is considered to have lived a righteous life and locations associated with his life are important to Twelver Shi’a Muslims. The mosque is believed to be built upon Salman’s remains, though it is unclear if he is entombed under the mosque or of it is just part of him, like a Catholic reliquary. The Salman al Farsi Mosque, as photographed from the Arch of Kesra is below: 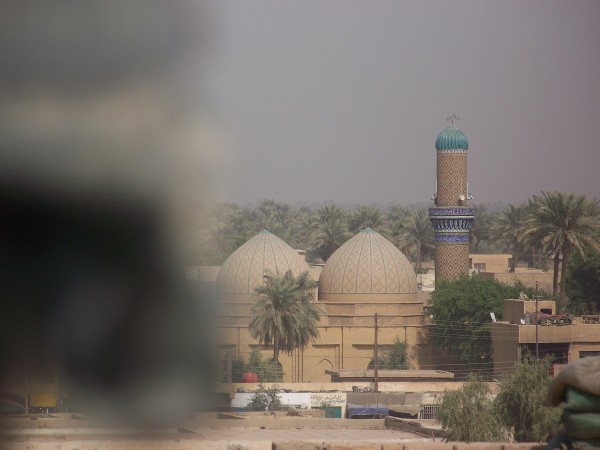 The mosque, or more accurately its waqf/administrative council, is the largest land owner in Salman Pak and a significant portion of the Salman Pak marketplace is built into the walls surrounding the mosque – like an arcade. Through 2009 the mosque was in dispute as there was a fight over whether it should be a Sunni or Shi’i mosque and as a result was locked and not being used. This was a huge blow to the local economy as it also shuttered the stores built into the spaces in the mosques external, outward facing walls and because it reduced the amount of pilgrims that would come to the city to see the mosque and pray there. Combined with the Arch of Kesra also being closed, this was a huge economic issue. In October 2008 my team was able to identify the local individual who was the keeper of the official documentation on the mosque and we directed the appropriate Coalition military leadership to him in an attempt to settle the matter and get the mosque reopened. I don’t think it really did any good and as far as I know the mosque is still closed.

So let’s talk agriculture, or the lack thereof. Iraqi agriculture works off of an irrigation canal system. For those from New Mexico or Arizona or Spain and parts of Mexico you’ll know this as similar to the acequia type of system where water is pumped from primary to secondary to tertiary canals – the last of which are what are used to irrigate specific farms and fields. Water is pumped from pumping stations along the river, in the case of where we were the Tigris and Diyala Rivers. Unfortunately the Coalition Provisional Authority had determined that the Iraqis would fix their own power system – both generation and transmission, that they had ten years to do so, and that they were to do it by implementing a private system. The result of this was that even though we knew where the pumping stations were and where the power lines that needed to be repaired and rewired and reconnected were, our Engineering Battalion wasn’t allowed to do anything about it. So no reliable/regular power, no water, no reliable water, no irrigation for palmyries and fields. And this led to other problems. Because everything had become so dry, the highly saline nature of the Iraqi ground had taken over. So even if water could be pumped, a season or two of throw away crops would need to be planted to draw the salt out of the ground. Our Civil Affairs company recommended sorghum, but without water…

This is a picture taken while in a Blackhawk as we were crossing over the Tigris River: 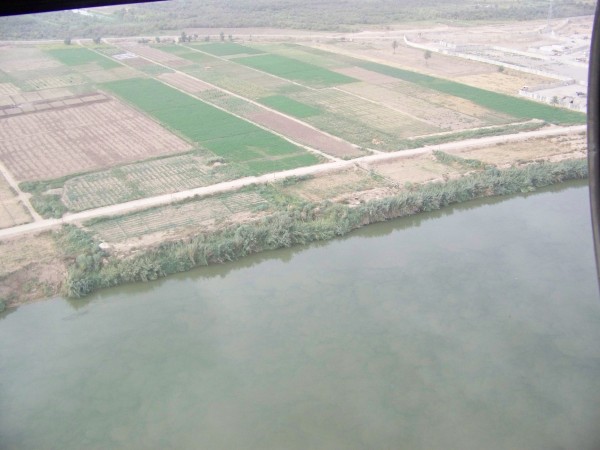 You can see that there is some greenery and some of the fields have crops growing. However, once you get farther away from the river, things get bone dry: 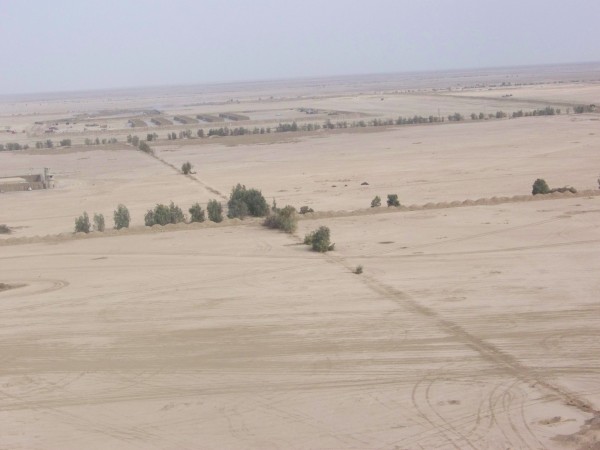 Here’s some shots from the Four Corners area in Mada’in. Its where the major North-South and East-West roads intersect. There’s a market on the Northwest and Southwest corners, a shopping center with a restaurant on the Northeast corner and just north of that was a patrol base. 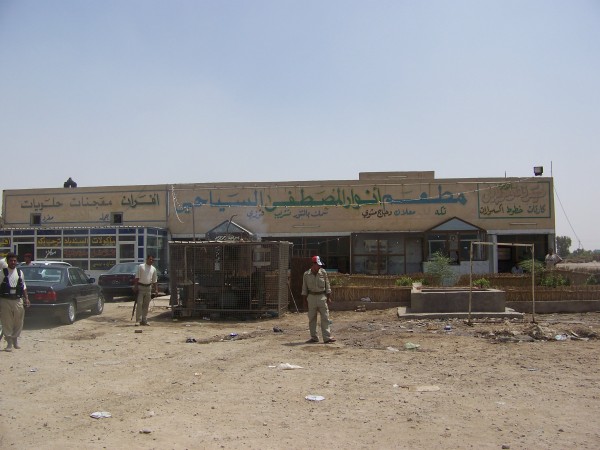 In the picture above are local Sons of Iraq guys that were escorting us. Behind them is the restaurant I mentioned and where their leader took us for lunch. This was to show everyone how much wasta/influence he had that he could bring a member of the brigade staff to a restaurant… The food was excellent! 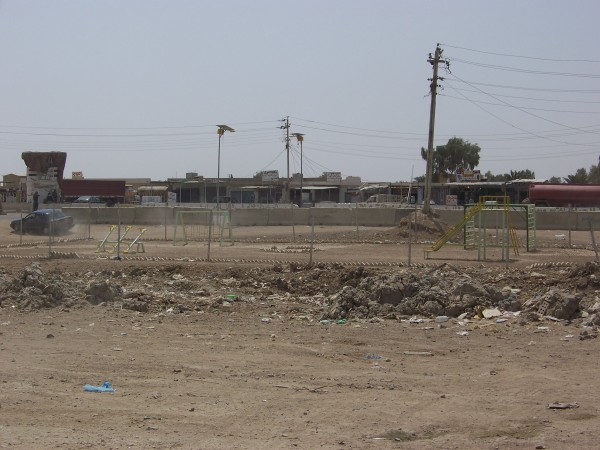 Here you can see some of the market. Most of the food, especially the packaged stuff was being imported from Turkey, Iran, and/or Syria. 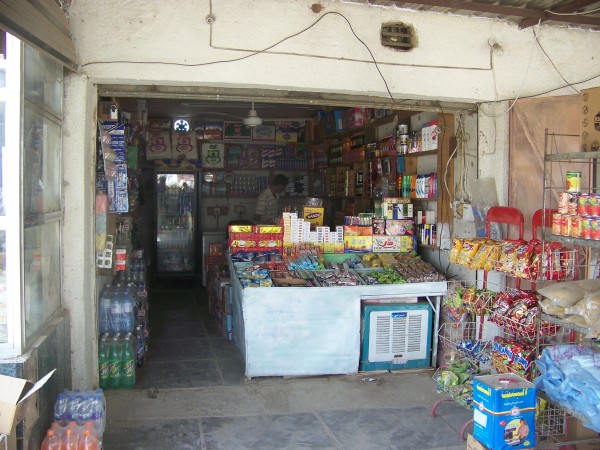 This is not the local petting zoo… It is the local butcher shop. And I’ve spared you the pictures of the butcher plying his trade. 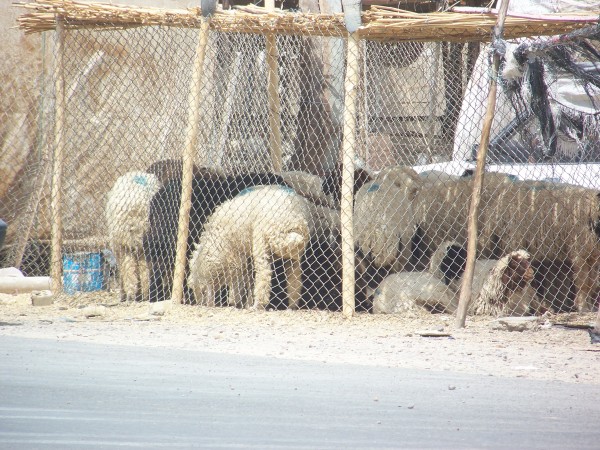 Here’s another shop. The market had plenty of stuff for sale, sundries, dry goods, and other food stuffs, but where a lot of it should’ve been local grown/produced, it was, unfortunately having to be imported. 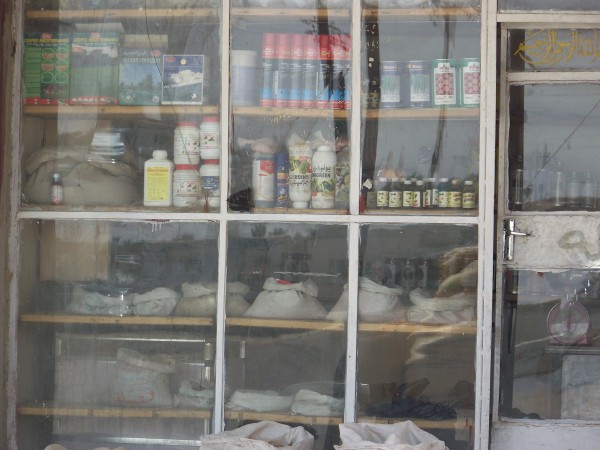 This is a cow (Inoright?) belonging to an internally displaced family. They brought it with them when they fled south to stay with relatives. This area was west of Four Dunhams in the center of our Area of Responsibility. Parts had patches of green surrounded by lots of dry dusty land. 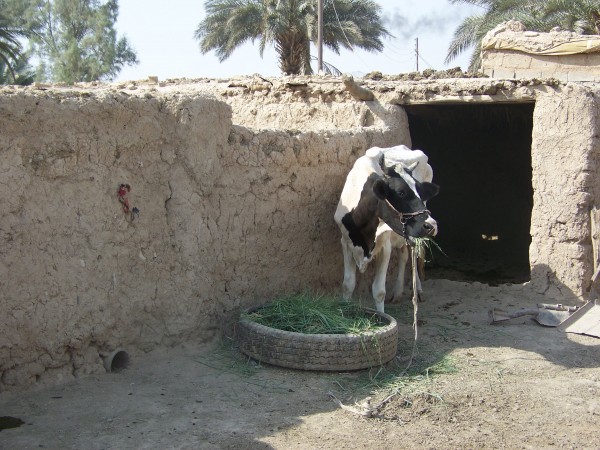 Let me just tie this all up by indicating, as Villagio often points out in comments, that the drought conditions are a primary driver to the problems in the Levant. My team began tracking this in Fall 2007 when we were informed that our brigade wasn’t going to Northern Iraq, but instead was going South and East of Baghdad. Even if you could get all the various sectarian and ethnic groups to back off and stop fighting, until something is done to mitigate the drought conditions, resource competition will always be a major source of conflict in the Levant.