You are here: Home / Open Threads / Daesh Is Not The Biggest Threat

Yesterday I said the next thing you know, they’d be recommending internment camps. I WAS FUCKING JOKING to make a point to some hateful people.

I should have known better: 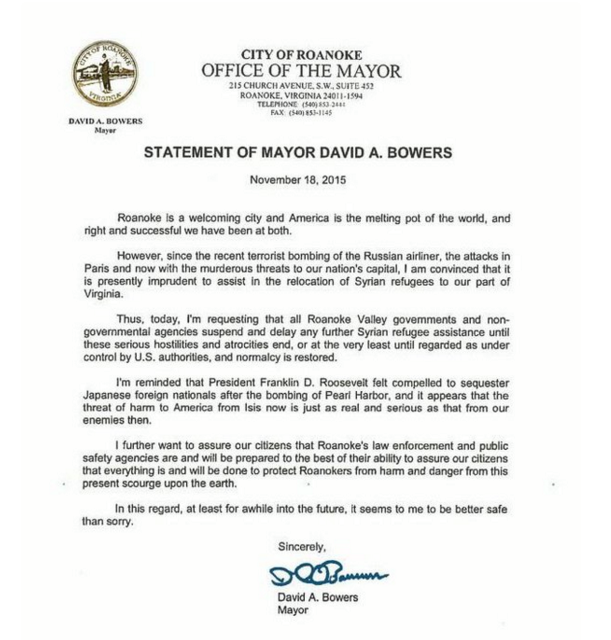 Earlier today, the mayor of Roanoke, Virginia, Mr. David A. Bowers, in the attached letter, joined several state governors in ordering that Syrian refugees not receive any government assistance, or be relocated to their jurisdiction. Apart from the lack of legal authority to do so (under the Refugee Act of 1980, only the President has authority to accept or deny refugees), his resort to fear-based tactics, and his galling lack of compassion for people fleeing these same terrorists, Mayor Bowers made the following startling statement:

“I’m reminded that Franklin D. Roosevelt felt compelled to sequester Japanese foreign nationals after the bombing of Pearl Harbor, and it appears that the threat of harm to America from Isis now is just as real and serious as that from our enemies then.”

Mayor Bowers, there are a few key points of history you seem to have missed:

1) The internment (not a “sequester”) was not of Japanese “foreign nationals,” but of Japanese Americans, two-thirds of whom were U.S. citizens. I was one of them, and my family and I spent 4 years in prison camps because we happened to look like the people who bombed Pearl Harbor. It is my life’s mission to never let such a thing happen again in America.

2) There never was any proven incident of espionage or sabotage from the suspected “enemies” then, just as there has been no act of terrorism from any of the 1,854 Syrian refugees the U.S. already has accepted. We were judged based on who we looked like, and that is about as un-American as it gets.

3) If you are attempting to compare the actual threat of harm from the 120,000 of us who were interned then to the Syrian situation now, the simple answer is this: There was no threat. We loved America. We were decent, honest, hard-working folks. Tens of thousands of lives were ruined, over nothing.

Mayor Bowers, one of the reasons I am telling our story on Broadway eight times a week in Allegiance is because of people like you. You who hold a position of authority and power, but you demonstrably have failed to learn the most basic of American civics or history lessons. So Mayor Bowers, I am officially inviting you to come see our show, as my personal guest. Perhaps you, too, will come away with more compassion and understanding.

Someone please tell me this is fake…or a mistake…or that I stumbled into an alternate universe. Because I’m having difficulty accepting that this is still end of 2015 in America.
Previous Post: «

Surrender, ISIS (Open Thread)
Next Post: Open Thread: Only When the Tide Goes Out Do You Discover Who’s Been Swimming Naked »