You are here: Home / Open Thread

Someone said it’s been all doom and gloom here, so I took a picture of Steve this afternoon while I was working on some stuff: 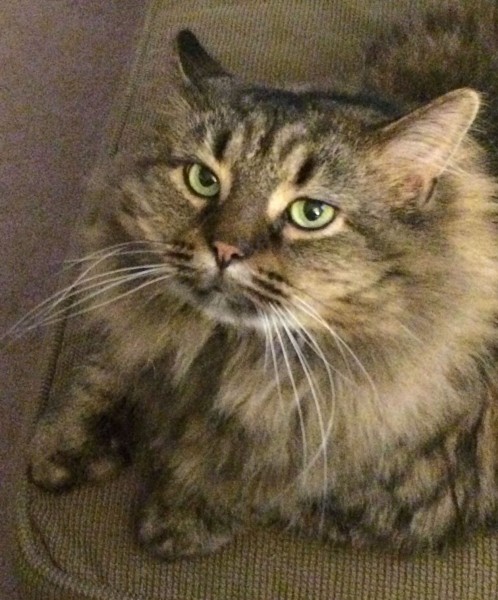 I’ve been kind of mad at myself for a few days about the way I treated a woman at the airport. Well, I’m mad at myself, but if I replay it in my head, I never come up with a scenario in which I don’t react the same way. At any rate, I was dropping my sister off at the airport in Pittsburgh. For departing flights, all the airlines are all in a row, and Annie was flying Delta, which was for some reason or another the first one as you arrive. I pulled up behind a car that was currently unloading, and was half in the road, and half behind her, but the right side of my car was right up next to one of those concrete dividers, so Annie could not get out.

So I waited for a minute, then another minute, and then finally this 60 y/o or so woman got out of the car, her passenger got out, and they slowly unloaded, chatted some more, and finally, he walked of and she got in her driver seat. This too about five minutes. I was kind of proud of myself, actually, that I hadn’t already blown a gasket, because I was unable to back up and go to another spot because of oncoming traffic. I was at this woman’s mercy. Finally, she got in, took a while, put her seat belt on. Then she put on her hazards and just sat there.

I gave a polite honk. I waited. I gave another polite honk. I waited. I gave a full on honk. Still she sat there. Finally, I got out of the car to see if something was wrong, she saw me approaching, and turned her head to avoid eye contact. I knocked on the window, and said “are you” and se cut me off and said “I’m fine.” That’s when I lost it and yelled “I don’t give a shit how you are lady I just want you to move your god damned car so I can get in.”

She then grudgingly move forward two feet. It was enough to pull forward to open the passenger door and get Annie out, so I unloaded her, got in my car, and flipped the old lady off as I drove away.

That’s where I am now. I know I shouldn’t have lost my temper and yelled at some old woman, but at the same time, I can’t think of going through that situation and having me react in a different way. People are just so damned oblivious to what is going on around them, and then when they do notice, they still don’t give a shit.

Why? Maybe she was waiting for her passenger, but I watched him get his luggage checked and walk in. Even then, she should have done what everyone else does since 9/11, which is drive to the airport gas station and wait for them to call.

Oh, and it goes without saying she was in a Mercedes.