You are here: Home / Foreign Affairs / The Gray Zone Attacked in Jakarta – Updated for Clarity (4:15 PM) 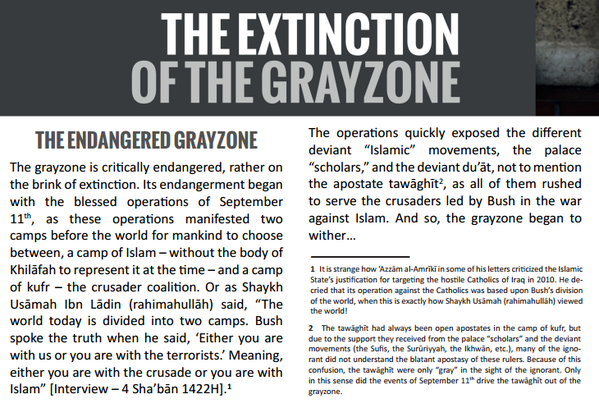 The Islamic State attack in Jakarta earlier today is part of the same campaign as the Paris attack last November. While the Jakarta attack was no where near as successful in terms of casualties, including those killed, the objectives of the attack was the same as of last November’s in Paris. Islamic State has two objectives for their attacks – both related. The first is to attack the Gray Zone; the social and civil space** that Muslims live in. It is an attempt to force Muslims, whether in the US or Britain or France or Indonesia or Jordan or anywhere else, to chose sides. To define themselves not only as Muslims, but as Muslim in such a way that sets them apart from their fellow citizens. It is both a figurative and literal attempt to collapse the public realm/sphere into the private one. The Islamic State hopes that by doing so they can then achieve their objectives of recruiting Muslims to relocate to the Caliphate – the only place where actual Islam is being practiced or to stay in place and use their local knowledge to attack targets that further weaken the Gray Zone. So the first objective is to set the conditions for recruiting by attacking the Gray Zone.

The second of the Islamic State’s objective with the Jakarta attack, just as it was with the Paris attack last November, is to get the US, its allies and its partners to provide the ways and means that the Islamic State does not have to achieve IS’s ends. This is terrorism as Psychological Operations (PSYOPS). While Indonesia still has its socio-political problems, they’ve come a long way from the Suharto and Sukarno regimes. This is summed up in what has become the Indonesian national motto: bhinneka tunggal ika, which means unity in diversity. The attacks earlier today are intended to shatter, if not reverse, Indonesia’s attempts to achieve unity in diversity. IS hopes that the Indonesian response, a crackdown on Muslim Indonesians, will destroy the Gray Zone, providing the Islamic State with new recruits and a justification for further attacks, which will then lead to greater crackdowns, as well as the imposition of security protocols that erode the Indonesian political, social, and economic reforms of the past eighteen years. Moreover, they hope that attacks in Indonesia will lead other states and societies to react out of fear and panic, eroding their Gray Zones and putting a truth to the lie that ideals of liberty and freedom and diversity are just a facade. The Islamic State cannot achieve these ends themselves. They are hoping we will be so scared as to do it for them.

The Islamic State’s goal with these attacks, in terms of trying to destroy the Gray Zone in Indonesia, which is a Muslim majority country, is for Indonesia t0 crack down on those Indonesian Muslims that it identifies as supporting the Islamic State. As I’ve written about in past posts, the Islamic State’s doctrine/theology is that real Islam is rooted in Abd al-Wahhab’s radical understanding of tawheed*** (the unity of the Deity) combined with Abd al-Wahhab’s calls to eliminate innovation, apostasy, and unbelief. Since the Islamic State asserts that Muslims that adhere to Islamic State’s doctrine/theology are the true Muslims, Muslims that crack down on Islamic State or Islamic State supporters can and will be labeled apostates. This allows IS to renew and/or reinforce their call that the Muslims involved in running Indonesia or supporting the governments efforts are unbelievers or apostates. Such assertions contribute to the attempted destruction of the Gray Zone by allowing the Islamic State to reinforce their central tenet of radical tawheed. This provides the justification for future attacks against the unbelievers and/or apostates, including what they’ll claim are innovative Indonesian Muslim practices. The intent is to drive both recruitment and crackdown, then use that for more attacks to drive more recruitment and crackdown.

* Image taken from here. It was originally part of an IS publication.

** The Gray Zone is not just the social and civil public space in which Muslims live. Everyone lives in it when not in private. We can see it under attack by Ammon Bundy and his followers in Harney County, Oregon among white, Christian Americans just as it is under attack in Paris and Jakarta and other places by the Islamic State.