I’ve been remiss on pet pics lately, so here are two. First, I changed the sheets and duvet cover today, and once again, I no more than left the room, came back, and someone had made herself comfortable. Can you spot Lily: 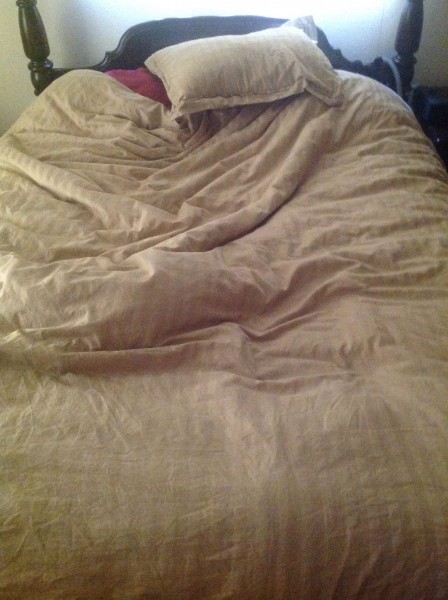 I never get to break in clean sheets anymore. Here’s a picture of Lily and Thurston chilling on the fat man’s lap: 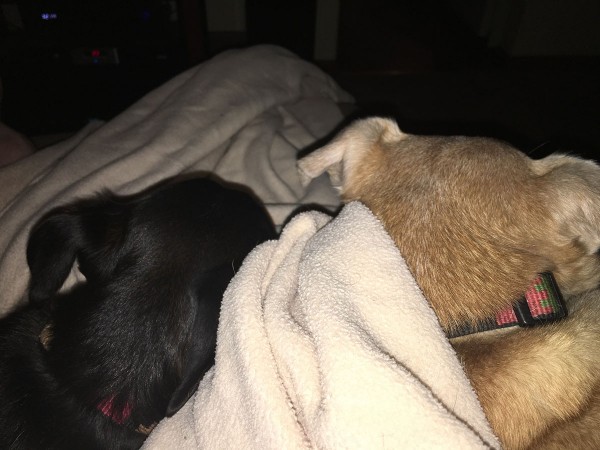 This is a no politics open thread.

END_OF_DOCUMENT_TOKEN_TO_BE_REPLACED

This shit drives me absolutely insane:

During a stop at a pizza joint in New York on Wednesday, John Kasich drew the mock ire of locals and reporters on Twitter as he used a fork.

On Thursday, Kasich explained himself.

“Look, look, the pizza came scalding hot, OK? And so I use a little fork,” the governor of Ohio told ABC’s “Good Morning America.” “You know what? My wife who is on spring break with my daughters said, ’I’m proud of you. You finally learned how to use a utensil properly.’ But I mean — not only did I eat the pizza, I had the hot sausage. It was fantastic.”

Kasich, apparently recognizing his error, finished up using his hands, although he did not fold over the slice, as is customary.

I personally don’t give a god damned how Kasich eats his fucking pizza. I don’t care if he even eats pizza. What I do care about is the fact that this election cycle the media has given almost as much attention (and in some outfits, far more) to Kasich’s pizza choices than they have his horrifying record in Ohio with unions, gay people, and abortion, as well as what he did to teachers.

END_OF_DOCUMENT_TOKEN_TO_BE_REPLACED

When I first saw this on the twitter feeds yesterday, I assumed it was a photoshopped image, but The Hill is profoundly anti-japery.

And it’s probably because I’m old — I grew up in the Bronx, and left at the height of the ‘Fort Apache’ days — but as a hashtag #TheBronxIsBerning is so.very.NO.

END_OF_DOCUMENT_TOKEN_TO_BE_REPLACED 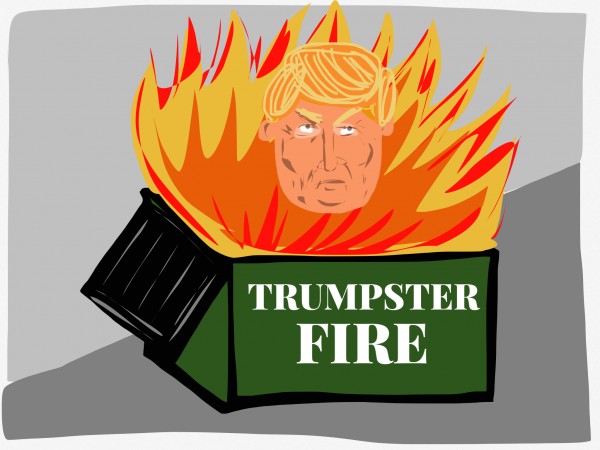 Trump’s not going to blow this thing, is he? The campaign manager’s arrest. The massive abortion gaffe and walk-back. The foolishness about nuclear proliferation. It’s been a bad week.

I’m afraid he’s going to flame out before clinching the nomination, paving the way for the GOP to nominate someone who can impersonate a sane person more convincingly.

END_OF_DOCUMENT_TOKEN_TO_BE_REPLACED

When the ancient appetite for hummingbird-tongue pie and pearls dissolved in vinegar filters through childhood memories of Captain Picard demanding “Tea. Earl Grey. Hot.”… From the NYTimes article:

… Is it a juice-ordering app? Is it just another kitchen-counter contraption? Or is it a 111,000-square-foot food processing factory, staffed by dozens of hourly workers, washing and slicing up fruits and vegetables in Los Angeles?

It is all of these things. “It’s the most complicated business that I’ve ever funded,” said David Krane, a partner at GV, formerly Google Ventures. “It’s software. It’s consumer electronics. It’s produce and packaging.”

Many of the tycoons who inhabit Silicon Valley are obsessed with health and longevity while harboring the conviction that technology can improve anything, even one of nature’s most elementary foodstuffs — in this case, juice. And they believe that niche trends, if properly disrupted, can become billion-dollar markets. Juicero is the latest expression of these techno-utopian impulses…

The machine itself is a white plastic slab roughly the size of a food processor. To get some juice, you insert a pouch that resembles an IV bag and press a button. A couple of minutes later, a thin stream of vividly colored liquid squirts into a glass.

For health nuts willing to pay a premium, Juicero promises the platonic ideal of juice. Plus, the machine never needs to be cleaned.

But getting from farm to glass involves a daunting mix of hardware, code and food processing. The arrangement relies on a smartphone app, always-on Wi-Fi, QR codes, high-tech packaging and an army of workers slicing fruits and vegetables in very particular ways…

How long after it hits the market will it take for some tv comedian to bait C-list celebrities with a fake Juicero dispensing doses of V8?

For that matter, how long before Ronco comes out with a $19.95 ‘Youceroo’ that sits on your kitchen counter and dispenses V8, Welsh grape juice, or Motts from ‘convenient storage paks’?

END_OF_DOCUMENT_TOKEN_TO_BE_REPLACED

I’m in a more dyspeptic mood than usual today, so when this came across my news feed I almost went into Cole SMASH mode:

Hillary Clinton’s entourage — four big black cars plus her top aide Huma Abedin — was spotted outside Bergdorf Goodman on Wednesday morning waiting as the presidential hopeful got her $600 haircut.

According to one witness, “Hillary’s entourage was blocking traffic early this morning, and waiting as Hillary got her hair done before heading up to do an event at the Apollo Theater in Harlem.”

Clinton gets her hair done at the John Barrett Salon by John Barrett personally, who we previously reported charges $600 for a haircut, plus an extra $600 for color.

It’s not clear how much Clinton pays for a private audience with Barrett, and her reps didn’t respond to requests for comment. But usually, the store closes off a private entrance and elevator bank for her arrival.

It may have been the most expensive haircut in history.

Two of Los Angeles International Airport’s four runways were shut down for nearly an hour on Tuesday, some incoming flights were delayed and Air Force One sat on the tarmac with engines running — all so that President Clinton’s Beverly Hills hairstylist, Chistophe, could come aboard and give Mr. Clinton a high-price trim before he took off for Washington.

Questions about Mr. Clinton’s runway razor cut dominated the White House news briefing today, with the communications director, George Stephanopoulos, scrambling to explain why the populist President tied up one of the country’s busiest airports to have his hair trimmed.

The author of that second piece on Bill Clinton- none other than Tom Friedman.

The simple fact of the matter is that no matter where the President or those under secret service protection go, it fucks things up. Blaming the protected for snarling traffic is just a lazy hit piece. She could have had her fucking hair cut there by me after a bottle of bathtub gin for the price of six bucks and a pokemon card and it would have fucked up traffic. It’s just how it is.

I hate our media.

END_OF_DOCUMENT_TOKEN_TO_BE_REPLACED

We’re so used to Republicans blaming President Obama for everything from Ebola to socks disappearing in the dryer that we have a sarcastic shorthand for it: Thanks, Obama! According to Republicans, even their own ignorant, racist, misogynist wrecking ball of a presidential candidate, Donald Trump, is somehow PBO’s fault.

Well! Last night, The Wall Street Journal published what may be the Platonic ideal of this plaintive wail:

He is six months away from destroying both the Republican Party and Reagan’s legacy.

Barack Obama will retire a happy man. He is now close to destroying his political enemies—the Republican Party, the American conservative movement and the public-policy legacy of Ronald Reagan.

As wonderful as it would be to credit PBO with skull-fucking Zombie Reagan, it didn’t exactly go down like that. In fact, PBO helpfully warned the Republicans that their oppositional defiant disorder would ultimately bite them on the ass, as Martin “Booman” Longman ably proves in this Washington Monthly column. An excerpt:

The Republicans should have listened to the president’s advice.

They thought they’d get more short-term bang for the buck by encouraging the Tea Party and the Birthers (including Trump). And they did.

And now their long-term reward is “Barack Obama will retire a happy man. He is now close to destroying his political enemies—the Republican Party, the American conservative movement and the public-policy legacy of Ronald Reagan.”

Yep. The whole piece is well worth a read (Longman’s piece, I mean, not Henninger’s).

Still, as gratifying as it is to see all those nasty chickens coming home to roost in the GOP henhouse, it would be foolish to count unhatched chickens in our own coop. I’ll believe the Republican Party is destroyed and Ronald Reagan’s legacy dismantled when I see a stake driven through its fat black heart and not a moment before.

Even so: Thanks, Obama!