The US Attorney’s Office in Nevada has announced charges for fourteen additional individuals in the Bundy Ranch Standoff of 2014 in Bunkerville, Nevada (h/t HGTomato). Twelve of the fourteen were taken in to custody earlier today, two – Blaine Cooper and Brian D. Cavalier were arrested last month and are already in custody.

You’ll notice on that list are two more of Cliven Bundy’s sons: Mel and David Bundy. The other big names include Eric J. Parker, seen below in an overwatch sniper’s position pointing his AR* pattern rifle at Federal law enforcement officers, and Jerry DeLemus. 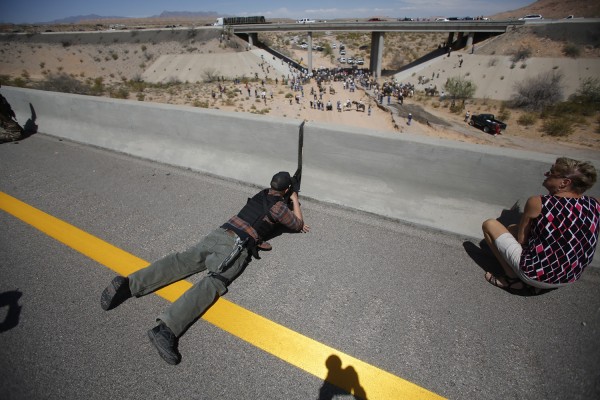 DeLemus is the retired Marine who has claimed to be the head of the militia/security at the Bundy Ranch Standoff. He is also a New Hampshire Tea Party activist and the co-chair of Veterans for Trump.

The charges, and their maximum penalties, are:

Conspiracy to Commit an Offense Against the United States – 5 years, $250,000 fine

* AR stands for Armalite, the company that first developed this style of semi-automatic rifle. It is unclear from this, or other pictures, if it is an AR 15 or an AR 10. The default chambering for the former is usually NATO 5.56/.223 Remington and for the latter is usually NATO 7.62/.308 Winchester.

Previous Post: « Big Hands You Know You’re the One
Next Post: Thursday Evening Open Thread: So Much for A GOP “Third-Party” Run »