You are here: Home / Nature & Respite / Faunasphere / Thoughts on SeaWorld and Orca Liberation

First, a confession: I was once on ShamuVision, the big screen overlooking the tank where SeaWorld’s orca Shamu did his (or her—see below) tricks. I can even remember the question I guessed right: whether Shamu gets his power from the downstroke or upstroke of his big tail. (Downstroke, which is why, when he surfaces, his tail is curved down.)

There were thousands of people in that audience, so it was cool that the camera landed on me, and also cool that I got a tough-ish question right. (Not like those softballs the little kids got. “Is Shamu black-on-white or white-on-black?” C’mon!)

But here’s what I didn’t know at the time: ”Shamu” was a sham. SeaWorld basically stuck the name on a series of orcas at the San Diego and other parks, encouraging the public to think that each park housed one long-lived and presumably happy orca, instead of many short-lived and presumably miserable ones. And I, and many others, bought into it.

Here’s what else I didn’t know at the time:

I also didn’t know that SeaWorld trainers masturbated (yup) male orcas and harvested their semen, which they used to impregnate females so that SeaWorld could exhibit the resulting calves. (You can see this in the documentary Blackfish, and yeah it’s gross. But a lot of animal exploitation centers on similar reproductive grossness.)

Finally, I didn’t know that some orcas attack the humans they supposedly enjoy working with. The original Shamu was “retired” after she attacked a SeaWorld employee, and numerous other incidents followed. This fact was blown out into the open in 2010, when the orca Tilikum attacked and killed trainer Dawn Brancheau. It was the third death that that particular orca had caused.

In hindsight, it seems the height of delusion to think that a human could swim safely in a tank with a 12,000 pound predator—especially one who’s known so much trauma and abuse at the hands of humans. But when an OSHA investigation after Brancheau’s death concluded that SeaWorld was an unsafe work environment, SeaWorld appealed. (Organizations that abuse animals typically not being all that concerned with the safety and welfare of humans, either—and, btw, SeaWorld’s lawyer was Eugene Scalia, son of the late and unlamented Supreme Court Justice Antonin Scalia. Nice family.) SeaWorld lost the appeal.

In any case, soon this will all be moot. Recently, after decades of protests and other activism, SeaWorld announced that it will be phasing out its orca theatrical shows and also captive breeding of orcas. This is a huge victory for animal activists, and the frosting on the cake is that SeaWorld will also be adding vegan and humane options to its menu.

Of course it’s not a total victory: it’s too late for poor Tilikum, whose death is imminent, and whose life has been a tragedy from start to finish. And SeaWorld’s other orcas will remain in captivity (and, presumably, performing) even though cetacean experts want them retired to coastal sanctuaries. (They can’t be released into the wild because they wouldn’t have the skills to survive.) And there are still other orcas trapped in other parks, and other species also requiring liberation. But I know my animal activists: they’re indefatigable and won’t stop till every cage is empty.

I predict that, in the not-too-distance future, SeaWorld will be presenting IMAX Shamu attractions, and maybe soon after that, virtual reality shows where you can watch Shamu up close, swim with Shamu, and maybe even be Shamu. (This is pure speculation by the way—I have no special knowledge. What’s your guess?) And I have a feeling these shows will be incredibly more interesting and educational than watching a coerced orca swim in circles around a tank.

And the orcas themselves will finally be left in peace. 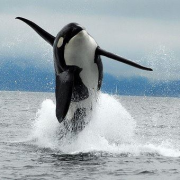