Exchange strategy is dynamic and I think the new round of pricing plus additional insurance company learning by doing will see some significant changes this during this Fall’s open enrollment period.

This is in reference to New York state pricing. The cost of the second lowest Silver in some regions is projected to go down dramatically from 2016 and 2017 even as the median insurer in the state is asking for an increase. This means there looks to be two clusters on the Silver Exchange market. The first cluster is Medicaid like pricing near the subsidy attachment point of the second least expensive Silver. The other cluster are plans that pay near standard commercial rates to providers and they are much more expensive. The first cluster will get most of the membership and even more of the healthy membership.

Insurance administration needs scale. As I have said before, my job when I was a plumber, was effectively membership scale invariant. A product with 300 people took me as much time to plumb as a product with 30,000 people but my costs were spread out over a much larger population. High cost insurers will be facing administrative scaling problems in markets where there is a Medicaid like provider that gets most of the healthy membership.

Over the long run (2018/2019), high cost insurers are likely to get off Exchange in regions where there are low cost Medicaid like insurers that get most of the membership.

The other major modification to my thought process on Exchange strategy is on the issue of spamming the exchanges with isomorphs in order to capture the #1 and #2 Silver. This is not a bad strategy but it is a suboptimal strategy.

Let’s use the Chicago zip code 60290 on Health Sherpa as an example for a 40 year old non-smoker. 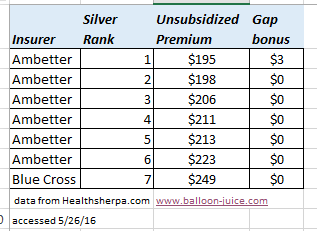 The chart to the right is the 2016 Silver prices.  As you can see, Ambetter effectively   spammed the Exchanges.  They had the low cost Silver and then another six plans before the first plan offered by another (high provider reimbursement) insurer.  This plan offering configuration means the subsidized individual who chooses the lowest cost Silver pays $3 less per month in out of pocket premiums then they would have if they chose the 2nd Silver.

This is a business opportunity.

Ambetter can make themselves significantly better off (with the side effect of making most subsidized buyers better off) by rejiggering their product offering profile.  Offering fewer silver plans would lead to higher enrollment of healthy people who are heavily subsidized.

This is an extreme example as it excludes the relative price dynamics of making the Blue Cross plan much cheaper, so the Blue Cross risk pool will get comparatively healthier as some of the sicker people who are currently in the Ambetter pool buy Blue Cross broader network coverage plans so Ambetter would have even larger risk adjustment outflows.

The highly probably strategy for companies that are very confident that they will offer the # 1 Silver with a large gap between their low price offerings and the next insurer’s lowest priced Silver is a modified plan spam approach with the aim of maximizing the gap without losing too much profitable membership. In this example, that would mean Ambetter would offer the #1 Silver at $195 per month and then the current #5  as their second, benchmark setting Silver plans at $213 per month.  This would make the gap $18 .  For an individual making $18,000 per year, the low cost Silver now costs them $45 per month while there is still a plan choice owned by Ambetter between the subsidy point and the first offering by a competitor.  This will lead to higher initial uptake of healthy, subsidized members during open enrollment as well as less attrition due to failure to pay.