You are here: Home / Past Elections / Election 2016 / I Can No Longer Rationally Discuss The Sanders Campaign / Allow Me a Moment to Rant about the God Damned Kids (Alternate Working Title- Your Drum Circle and Feelings Entitles You to Zero Votes) 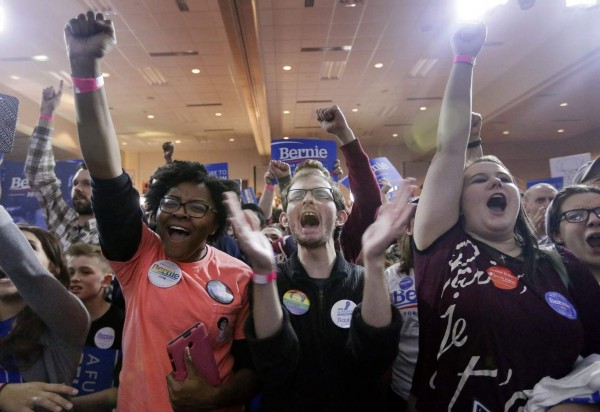 So right now, this is where we stand.

– Hillary has won an outright majority of pledged delegates. She has won 2184 of them to Bernie’s 1804.

– She has won the majority of primaries. Bernie has most of his wins in caucuses.

– She has an overwhelming majority of Superdelegates.

And yet we are met daily with a barrage of “the system is rigged,” pissing and moaning about closed primaries, and mentions about the kids and the future.

I’m sick of it. The future is the future. This is about here and now. She’s won. End of story. Anything else is just delusional.

But let me get back to the god damned kids. I honestly don’t care if a bunch of political neophytes have a sad because Bernie isn’t going to win. I don’t care if they hold a hissy fit. It’s time for them to grow the fuck up, and I am tired of the Bernie or Busters trashing the Democratic party because they don’t get their way.

Here’s the deal. I was a republican for years. I was a member of the party. I donated to them, voted for them, and worked to elect Republicans. I then realized I was an idiot and all the things I thought they stood for they don’t, and I beat a hasty retreat.

I looked around. I thought about just going independent. I nixed the idea because I realized this is a two party system, and if I want to be an effective part of the process, I had to be involved. So I joined the Democrats. I donate to the DNC, the DSCC, the DCCC, to individual candidates, to Democratic causes. I went and will go door to door. I phone banked. I helped raise money for Democrats. I feel a bit of ownership in my party. And my party chose Hillary Clinton, and that is who I am going to support in the fall.

I am also an adult, and realize that you take the good with the bad in a party. For every Sherrod Brown and Al Franken and Amy Klobuchar, there is a Ben Nelson. But that doesn’t change the fact that overall, the Democratic party has and continues to be, overall, a force for good. I’m proud to be a Democrat. I like putting the sticker on my car and the sign in my yard, because I am proud of the party. I feel a sense of ownership an d personal pride because I have helped to make the party what it is.

So it really fucking pisses me off when I hear a bunch of kids who just recently even became old enough to vote, or a bunch of disaffected independents who could never bother to commit to a party because they are just above it all or too special to fit into the confines of the two parties or angry bitter old leftists screaming that Nader was right and the Democratic party is no different than the Republicans screaming that their guy, who has been a Democrat for a year, doesn’t get to win because they have really strong feels.

I want to kick puppies when I hear the whining about closed primaries. I wish they were all closed primaries. I think Democrats should choose the Democratic candidates. Fuck you, you special flower. Go join the Greens and vote for Jill Stein. In the general, you can vote for whomever is on the ballot. But in the primaries, you have to choose a party. Fucking deal.

I’m sick of the bullshit. Every time I hear the whining about the kids- “They love Bernie. They are the future!” – all I can think is well, maybe the can join the Democrats, put in the money, blood, sweat, and tears, and in a couple cycles they will create a movement within the party large enough that someone like Bernie Sanders will win. And you know what, if they do, loyal Dems like me will phone bank and go door to door and work to elect that person.

Basically, what we are dealing with when we hear about the kids not getting their way with Bernie is the political equivalent as the same annoying entitled fucks who at the age of 22 go on House Hunters and demand granite countertops and stainless steel appliances and his and her en suite bathrooms and wood floors and a big deck because “they like to entertain.” Go earn that shit, and until then, go fuck yourself. Here- a bunch of old dudes wrote a song about this before you were born, you obnoxious little shits.

Your drum circle entitles you to zero votes. Also, get off my grass.

PS- Richard and Tom are far more mature than me. But we all knew this.