You are here: Home / Past Elections / Election 2016 / All The Good Shit Belongs to US

The last couple of days, we’ve heard over and over again from many Republicans the same sort of thing, typified by Charlie Sykes, the dean of conservative talk radio in Wisconsin:

Do you know how old I am? Old enough to remember when speeches like this would've been given at GOP convention… Not Dem one. Brutal.

Snark aside: GOP needs to understand what is happening to them tonight…

I cannot believe I'm watching the Democrats become the party of patriotism.

Now first things first. Dems were always patriotic- it was Republicans who confused patriotism with just agreeing with whatever bullshit the government said while we rushed into war and had their heads so far up Rush Limbaugh’s ass they couldn’t see straight

At the same time, this was the most overt display of patriotism I have ever witnessed, but without what I felt was the jingoism of the right. And I gotta add, I find overt patriotism unsettling and uncomfortable outside World Cup events and the Olympics. I’m more of a hang a flag out front of the house and watch white people dance awkwardly on the PBS 4th of July specials than I am the tattoo an eagle on my chest and scream “USA!! USA!!” while pissing Budweiser on a stack of back issues of Le Monde. But that’s just me.

At any rate, what we can probably expect to see is that people of the, well, professional left, the guys who thought it was necessary to scream at a Marine General speaking during the convention (a guy who went all out for the Iran deal PRECISELY because he doesn’t want war) are probably going to start braying that the Democratic party left them and what not, and fail to realize that the Democratic party didn’t leave them, the Republican party just left their fucking senses.

That’s right. We Democrats get ALL THE GOOD SHIT NOW. We get the most progressive platform and agenda in my lifetime, we get to cheer for our troops and say NO MORE STUPID WARS. We get to stand up and say Black Lives Matter and thank the cops who risk their lives because we’re fucking smart enough to hold two god damned ideas in our heads. We get to stand up for a woman’s right to choose and gay people to marry and still get to rock the house as Rev. Barber brings down the fucking roof in the name of the almighty.

We get it all. We get all the good stuff. The whole kit and kaboodle. The Republicans get Trump and his dingy digits and we get to make them wear it and own it. Progressives didn’t lose the Democratic party. Republicans lost their fucking minds.

Sucks to be them. We get all the balloons, too. 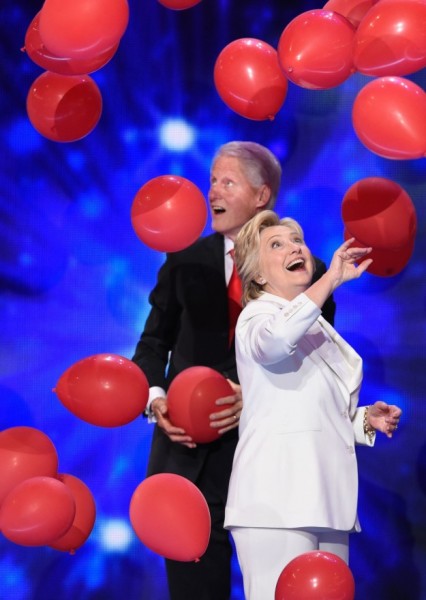 See that look of pure joy on Bill’s face? That’s what I look like in the ice cream aisle at Kroger, btw.