I’m going to expand on a comment in an earlier thread and disagree somewhat with distinguished colleague Tim F on what the Trump-Breitbart merger means. Replacing campaign veterans like Manafort (odious, second-rate and disreputable though they may be) with an alt-right circle-jerk might look like Trump giving up on winning the presidency. But it’s just a change in tactics.

What’s happened is that the Trump scampaign has realized that they will never win by making Trump conventionally “presidential.” He can’t pull that off. Instead, they’ll seek victory by trying to drag Hillary Clinton down to Trump’s level in the public’s perception and eke out 270 electoral votes on anti-establishment sentiment alone.

We should pause here and take in the fact that a major party nominee has openly embraced white nationalism, which the Trump-Breitbart merger confirms. We knew that already, of course, but with the Breitbart affiliation, there can now be no doubt, and it will be interesting to see how the Beltway press responds to that phenomenon.

Joy Reid, subbing for Chris Hayes last night, ably grilled a Trump scampaign surrogate on the kooky Breitbart angle, confronting him with that organization’s batshit crazy extremism. Here’s a screen grab of the Breitbart headlines Reid referenced to demonstrate what a pack of pinwheel-eyed kooks they are: 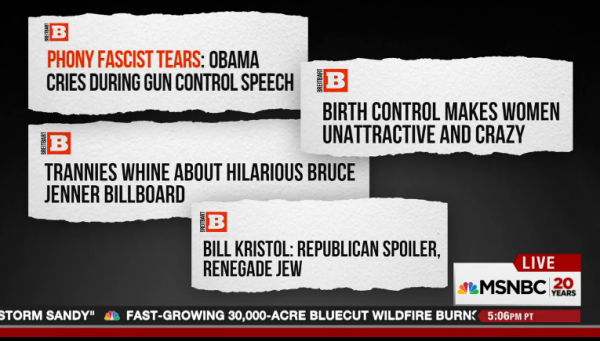 But Trump’s brain trust is counting on the fact that most Americans don’t know that Breitbart is a white nationalist fever swamp, and indeed, they don’t. The Trump shill on Reid’s show ducked questions about the nature of Breitbart while telegraphing the reason Trump brought Bannon on board: to smear Clinton.

Trump may be hoping that even if he can’t attract more voters to himself, he can slime Clinton enough to drive disaffected Republicans and independents away from her and into the Johnson or Stein camps and squeak out a win that way. I don’t think it will work because Trump is an embarrassing buffoon.

But at this point, he’s pinning all his hopes on making Hillary Clinton as toxic as himself. So get ready for a tsunami of slime that may be unprecedented in our lifetimes. That’s the only play the Trump people have left, and thus the Trump-Breitbart merger is not 100% stupid or self-indulgent. It’s the vast right-wing conspiracy — retooled.