Or to finish the quote from Kohelet/Ecclesiastes: “There is nothing new under the sun…”

In the 19th Century the US was gripped with one of it cyclical bouts of nativism, anti-immigrant xenophobia, and anti-minority religious extremism. Just as a frenzy was whipped up about the Ground Zero Mosque, which was actually a Muslim Community Center with a prayer chapel (akin to a Jewish Community Center), and around the building of mosques or the setting aside of land for Muslim cemeteries post 9-11, so too was a frenzy whipped up in the 19th Century around the building of Catholic churches. And just as we are currently seeing a frenzied anti-immigrant xenophobia around Latino and Hispanic immigrants – and lets be honest, its ultimately not going to matter if they’re legal or undocumented, so too did we see a 19th Century analog against Irish and Chinese immigrants, as well as others depending on the part of the US. As we are currently seeing a hard hearted focus to deny sanctuary to refugees fleeing war in Afghanistan, Iraq, and Syria – including those who served as translators/interpreters for US and Coalition Forces and we owe a debt to provide them safe haven, so too did we see a similar hard hearted response to Jews in the 1930s and 1940s fleeing the rising and then consolidating tyranny of the NAZIs. And all too often it is the descendants of the early targets of discrimination that have chosen to lead the contemporary efforts of intolerance, nativism, and xenophobia. 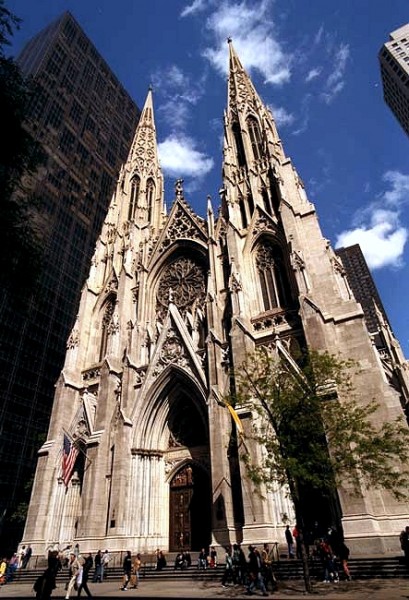 In the mid 19th Century there was tremendous opposition to the building of St. Patrick’s Cathedral in New York City, as well as Catholic churches in other parts of the US.

At the Church of the Disciples of Christ on 28th Street near Broadway, the Rev. Joseph Bradford Cleaver spoke under the title “Crucifix Smiting the Cross; or shall the Papacy govern New York City?” He was among those who saw the opening of the magnificent new St. Patrick’s Cathedral on Fifth Avenue in midtown Manhattan the previous year as a dangerous sign of Catholic power and warned that Cardinal John McCloskey, who was “enthroned” there, would rule America as the pope’s viceroy and bring on a new Inquisition if Grace were elected mayor.

The church where the Knights of Columbus was founded was similarly denigrated. The New York Times at the time reported on the construction of St. Mary’s in the following manner: 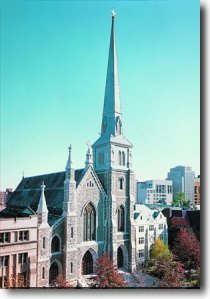 “An Unprofitable Church: Roman Catholic Troubles in New-Haven.” The church on one of New Haven’s finest residential streets had been dedicated five years earlier, but only after a struggle in which the pastor was pressured to accept an alternate site. As The Times put it, “When the residents of this aristocratic avenue discovered that they were in danger of seeing a Roman Catholic church spring up among them, with all that the establishment of such a church implied, they bestirred themselves to oppose the project. The wisest of the Roman Catholics here did not favor it, and St. Mary’s was induced to exchange the lot for a good one in some other locality.” But that site was also deemed “too good” for Catholics, so a lesser lot was found. The pastor refused this, according to The Times, and built the church as originally planned on wealthy Hillhouse Avenue. According to the Times, the parish fell into debt (its parishioners being mainly “servant girls”). “The result shows how foolish were those who persisted in building the church on the spot where it stands,” The Times concluded. “How much spite had to do with it cannot now be ascertained, but the complete history of the negotiations would be very interesting. The edifice was erected beyond the boundaries of the parish, and it invaded the most exclusive homes of wealth and culture. It is an eye-sore on the avenue, a source of annoyance and injury to neighboring residents, and a complete failure as a business enterprise.”

This isn’t all that different than what we heard and saw in the opposition to the Park Avenue Islamic Center aka The Ground Zero Mosque. 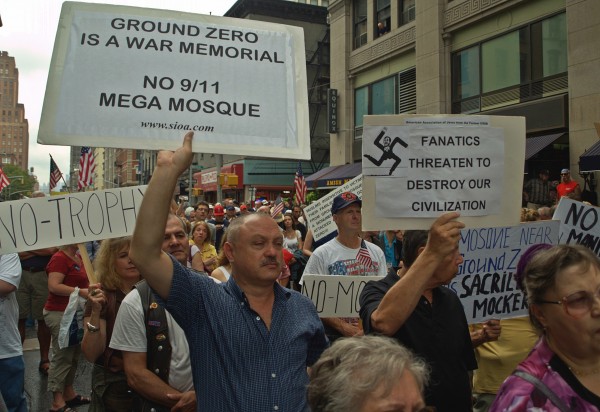 The protestors had been whipped into a froth by the uninformed, but politically very profitable fear mongering of a few self appointed, but largely ignorant, arbiters of what was and was not acceptable in regards to Islam. For instance:

We also saw anti-immigrant imagery that rivals any of the modern anti-undocumented immigrant language we are currently observing. Here are just two examples: 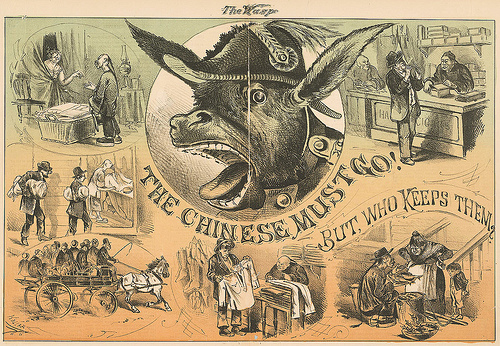 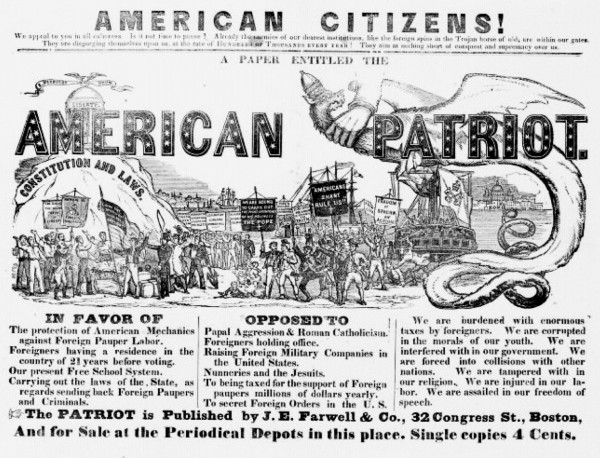 (Anti-Immigrant Statement of Principles from The Patriot, Boston)

Similarly Senator Taft sent the following letter to the Jewish War Veterans of the United States indicating his opposition to resettling 20,000 Jewish German children in the US in excess of the immigration quotas of the time. 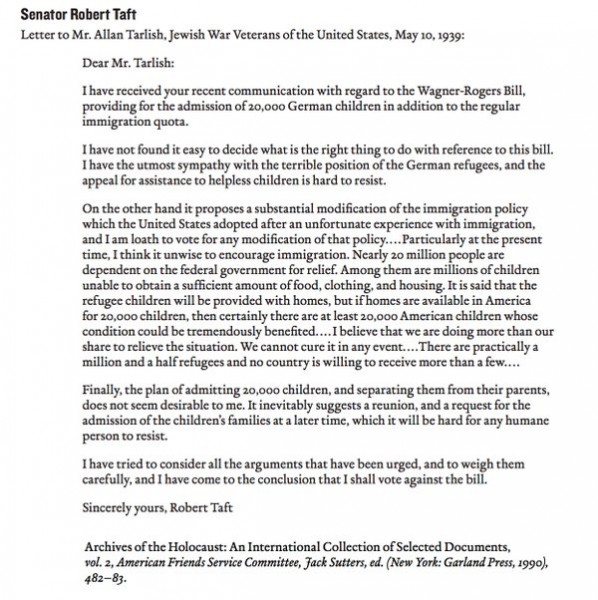 Senator Taft’s position on accepting Jewish German children to save them from the NAZIs and the reasons for it are not too far off from Governor Mike Pence’s in refusing to accept Syrian Civil War refugees fleeing the Islamic State:

And Governor Pence is only one among 27 governors, all Republicans, that told the Obama Administration they would not accept Syrian Civil War refugees. This is also the position of the Speaker of the House Paul Ryan.

“Our nation has always been welcoming. But we cannot let terrorists take advantage of our compassion. This is a moment where it’s better to be safe than to be sorry.”

What we are seeing in Election 2016 is not something new in the United States. Just as there are economic cycles and crime cycles and religiosity cycles, there also seems to be extremism, nativism, and nationalism cycles within US society too. All of this has happened before and it will, most likely happen again.

What has been will be again,
what has been done will be done again;
there is nothing new under the sun. – Kohelet/Ecclesiastes 1:9