You are here: Home / Foreign Affairs / Breaking: Shimon Peres Has Died at Age 93 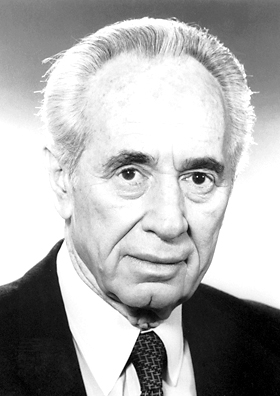 The BBC is reporting that Shimon Peres has died (h/t LAO). Here’s the BBC’s obituary for him:

He held almost every public office, including those of prime minister and president, although he never led a party to an election victory.

Born Szymon Perski in Wiszniew, Poland (now Visnieva, Belarus), on 2 August 1923, Shimon Peres was the son of a lumber merchant.

His parents were not Orthodox Jews but the young Shimon was taught the Talmud (compendium of Jewish law and commentaries) by his grandfather and became a strong adherent of the faith.

In 1934 the family moved to the British Mandate of Palestine (Peres’ father had emigrated two years earlier) and settled in Tel Aviv.

After attending agricultural school Peres worked on a kibbutz (agricultural commune) and became involved in politics at the age of 18 when he was elected secretary of a Labour Zionist movement, Hanoar Haoved Vehalomed.

In 1947 Israel’s founding Prime Minister, David Ben Gurion, put him in charge of personnel and arms purchases for the Haganah, the predecessor of the Israel Defense Forces.

He secured a deal with France to supply the new state with Mirage jet fighters and also set up Israel’s secret nuclear facility at Dimona.

Peres was elected to the Knesset (Israeli parliament) in 1959, standing for the Mapai party, the forerunner of the modern Labour movement in Israel, and was appointed deputy defence minister.

In 1965 he resigned after being implicated in a reopened inquiry into Operation Susannah, an Israeli plan to bomb British and US targets in Egypt in 1954 to try to influence Britain not to withdraw its troops from the Sinai.

A review of the original inquiry into the operation found inconsistencies in the testimony, and Peres, together with Ben Gurion, left Mapai to form a new party.

When Golda Meir resigned as prime minister in 1974 after the Yom Kippur war, Peres unsuccessfully fought Yitzhak Rabin for the vacant post.

Rabin stood down as the Alignment party leader in 1977 after a currency scandal involving his wife but a quirk in the Israeli constitution meant he could not resign as prime minister.

Peres became party leader and unofficial prime minster before leading the coalition into a defeat by the Likud party under Menachem Begin.

He suffered five further election defeats, all of which resulted in him being given ministerial positions as part of a coalition government.

In 1992 Peres failed to win the leadership of the Israeli Labour Party after being defeated in the preliminary stages of the contest by Rabin.

As Rabin’s foreign minister, Peres began secret negotiations with Yasser Arafat and the Palestine Liberation Organisation, which led to the historic Oslo peace accords of 1993.

For the first time the Palestinian leadership officially acknowledged Israel’s right to exist.

A year later Peres became a joint winner of the Nobel Peace Prize along with Rabin and Arafat.

Once an advocate of Jewish settlements in the occupied West Bank, Peres became a leading political dove, often speaking of the need for compromise over territorial demands in Palestinian areas .

“The Palestinians are our closest neighbours,” he once said. “I believe they may become our closest friends.”

Peres became prime minister in 1995 after Rabin’s assassination but held office for less than a year before being defeated by Benjamin Netanyahu of Likud.

In 2000 he failed in his effort to secure the ceremonial post of president, losing to the relatively obscure Moshe Katsav.

When his successor as Labour leader, Ehud Barak, was defeated by Ariel Sharon in the 2002 elections, Peres led Labour into a coalition with Likud and won the post of foreign minister.

He was able to extend a “safety net” in parliament to Sharon, enabling the latter to pursue a plan to disengage from Gaza and parts of the West Bank in the face of opposition from his own Likud party.

In 2005 Peres announced his resignation from Labour and his support for Sharon, who had formed a new party called Kadima.

When Sharon suffered a major stroke there was speculation that Peres might have become leader of Kadima but he was blocked by former Likud members who were the majority in the party.

In June 2007 he was elected president of Israel, resigning form the Knesset where he had been the longest-serving member of parliament in the country’s history.

His served seven years as president, before stepping down in 2014, the world’s oldest head of state.