Perhaps as for many of you, it was Howard Zinn’s wonderful and essential A People’s History of the United States that opened my eyes to the atrocities committed by Columbus and his sailors. From the relevant chapter:

They went from island to island in the Caribbean, taking Indians as captives. But as word spread of the Europeans’ intent they found more and more empty villages. On Haiti, they found that the sailors left behind at Fort Navidad had been killed in a battle with the Indians, after they had roamed the island in gangs looking for gold, taking women and children as slaves for sex and labor.

Now, from his base on Haiti, Columbus sent expedition after expedition into the interior. They found no gold fields, but had to fill up the ships returning to Spain with some kind of dividend. In the year 1495, they went on a great slave raid, rounded up fifteen hundred Arawak men, women, and children, put them in pens guarded by Spaniards and dogs, then picked the five hundred best specimens to load onto ships. Of those five hundred, two hundred died en route.

In the province of Cicao on Haiti, where he and his men imagined huge gold fields to exist, they ordered all persons fourteen years or older to collect a certain quantity of gold every three months. When they brought it, they were given copper tokens to hang around their necks. Indians found without a copper token had their hands cut off and bled to death.

The Indians had been given an impossible task. The only gold around was bits of dust garnered from the streams. So they fled, were hunted down with dogs, and were killed.

Trying to put together an army of resistance, the Arawaks faced Spaniards who had armor, muskets, swords, horses. When the Spaniards took prisoners they hanged them or burned them to death. Among the Arawaks, mass suicides began, with cassava poison. Infants were killed to save them from the Spaniards. In two years, through murder, mutilation, or suicide, half of the 250,000 Indians on Haiti were dead.

When it became clear that there was no gold left, the Indians were taken as slave labor on huge estates, known later as encomiendas. They were worked at a ferocious pace, and died by the thousands. By the year 1515, there were perhaps fifty thousand Indians left. By 1550, there were five hundred. A report of the year 1650 shows none of the original Arawaks or their descendants left on the island….

Las Casas tells how the Spaniards “grew more conceited every day” and after a while refused to walk any distance. They “rode the backs of Indians if they were in a hurry” or were carried on hammocks by Indians running in relays. “In this case they also had Indians carry large leaves to shade them from the sun and others to fan them with goose wings.”

Total control led to total cruelty. The Spaniards “thought nothing of knifing Indians by tens and twenties and of cutting slices off them to test the sharpness of their blades.” Las Casas tells how “two of these so-called Christians met two Indian boys one day, each carrying a parrot; they took the parrots and for fun beheaded the boys.” 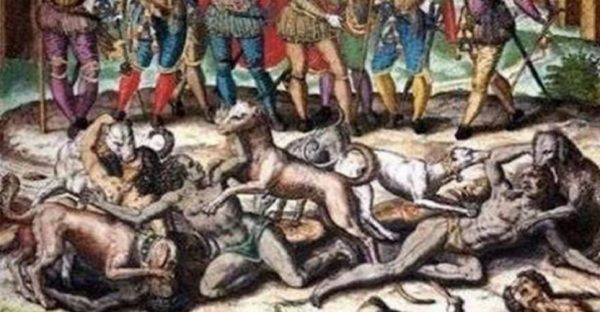