This nation has a serious mental health crisis. I guarantee this woman drives an SUV without using turn signals.

END_OF_DOCUMENT_TOKEN_TO_BE_REPLACED

I’ve had two NBER papers that I am struggling to make sense with.  These papers are critical health policy papers as they relate to high deductible health plans (HDHP).  We’re going in that direction for a lot of health policy.  My prior assumption is that high deductible health plans paired with a health savings account is appropriate for people with the means to save significant money and a reasonable expectation that they are insuring and saving against one time risk.  As soon as those conditions are not met due to either low ability to save due to low income or known chronic conditions that would routinely incur costs at or above annual cost sharing limitations, high deductible health plans are massively inadequate.  That is my prior.

Relative to control firms and the pre-offer years, firms offering a CDHP had an estimated 6.6, 4.3, 3.4 percent lower annual spending in the first three years respectively (p < 0.05 for each difference) (Table 3, column 1). In addition, the CDHP second pre-year trend coefficient is insignificant, supporting the assumption of a parallel trend in the absence of CDHP offer. In section 6.4 below, we discuss whether the post CDHP offer impact is changing over time controlling for differential composition of treatment firms over time.

Her team does a nifty piece of machine learning to balance covariates to address the possibility that the savings are merely an illusion of the covered population effect.  I don’t have the statistical chops to say if their treatment makes sense but I’m glad that they are attempting to look at the case mixture.  One of my big worries as we generalize HDHP learning from employer sponsored coverage is that ESI is a unique pool compared to public pools.  ESI is younger than Medicare, wealthier than Medicaid and healthier than both.  More importantly, ESI offers people with known high disease burden a lot of outs if the richness of their benefit package declines.  They can get a new job.  They can go on their spouse/domestic partner’s coverage.  They can apply for Medicare and disability if sick enough.  There are outs in ESI that are not present in other systems.  This is my big worry about generalizing research.

And then the other paper:

Employees at the firm are relatively high income (median income $125,000-$150,000), an important fact to keep in mind when interpreting our analysis. In addition, post-switch there is no meaningful change in the relatively small rates of employee entry or exit from the firm. The required firm-wide change from free health care to high-deductible insurance constituted both a substantial increase in average employee cost-sharing and a meaningful change in the structure and complexity of that cost-sharing. We use this natural experiment, together with the detailed data described to assess several aspects of how consumers respond to this increased cost-sharing. First, we develop a causal framework to understand how spending changed, in aggregate and for heterogeneous groups and services. In doing so, we account for both medical spending trends and consumer spending in anticipation of the required plan switch.5 We find that the required switch to high-deductible care caused a spending reduction of between 11.09-15.42% for t0, with the bounds reflecting a range of assumptions on how much anticipatory spending at the end of t−1 would have been spent under higher marginal prices in t0. Spending was causally reduced by 12.48% for t1 relative to t−1, implying that this reduction persists in the second year post-switch….

We find no evidence of price shopping in the first year post switch. The effect is near zero and looks similar for the t−1 − t0 year pair (moving from pre- to post-change) as it does for earlier year pairs from t−4 to t−1. Second, we find no evidence of an increase in price shopping in the second year post-switch; consumers are not learning to shop based on price. Third, we find that essentially all spending reductions between t−1 and t0 are achieved through outright quantity reductions whereby consumer receive less medical care. From t−1 to t0 consumers reduce service quantities by 17.9%. Fourth, there is limited evidence that consumers substitute across types of procedures (substitution leads to a 2.2% spending reduction from t−1 − t0). Finally, fifth, we find that these quantity reductions persist in the second-year post switch, as the increase in quantities between t0 and t1 is only 0.7%, much lower than the pre-period trend in quantity growth. These results occur in the context of consistent (and low) provider price changes over the whole sample period.

The decline in expenditure is directly related to decline in utilization and not shopping.  This applies to the sickest group of people who routinely would go over their deductible.

My brain crash on these two papers is the first paper is not seeing any catastrophic care costs  bounce back in the out years while the second paper finds extremely inefficient and irrational consumption behaviors.

These are two papers I need to chew on.

END_OF_DOCUMENT_TOKEN_TO_BE_REPLACED

At last, a little uplift for the Balloon Juice commentariat! (And, yes, this front-pager, who just turned 61.)

The fact that 54% of those voting voted against Trump clearly has him unnerved. Let's remind him every day.

Speaking of long-range tactics, I think Dana Houle has a good point here:

After narcissism, it’s what was on TV, what the last person he spoke w told him, cruelty, racism/sexism, conflicting goals of his minions https://t.co/LLSOzZBDLD

And no, Trump is not a puppet of a cohesive team executing a plan. The Kushner/Bannon/Priebus triumvirate will be acrimonious & chaotic

Jared Kushner is a NYC businessman, heir to a convicted felon real estate developer. Reince Priebus is a leading product of the GOP political machine. Steve Bannon is a sociopath who sees the neo-Nazi, white-supremacist “alt right” as a tool for random social destruction, which he finds entertaining / useful for his private goals. (Bannon is acting as the third corner of the traditional GOP Golden Triangle, Business/Bureaucracy/’Church’, which is its own kind of weird American success story.) The three of them have converged, temporarily, to push an aging “celebrity” to the top of the American political pyramid. Their common interests started diverging immediately after Clinton’s concession speech… and the cracks are widening by the day.

Our strategy, as Democrats and citizens, must include encouraging the dissension between ‘good for the Trump/Kushner business conglomerate’ — ‘Good for the GOP party’ — ‘Good for the dank lulz’. Yes, it would be nice if the pivot weren’t Donald Smallgloves Trump, but then again, he’s not going to make life easier for the triumvirate, either.

On Monday I will introduce a resolution asking President-elect Trump to comply w/ Constitution regarding his assets. https://t.co/KFt4zPliVS

END_OF_DOCUMENT_TOKEN_TO_BE_REPLACED

Here’s a shiny new post to get you all through the wee hours. Given the discussion in the comments to the previous thread, I reckon this is an appropriate musical choice.

END_OF_DOCUMENT_TOKEN_TO_BE_REPLACED

These tweets by Trump are a great example of the silliness of “don’t fall for his tweets, he’s trying to distract you.” This shit is serious

A responsible observer can do both!

Why do people posit this false choice? It’s like saying focus only on Nuremberg Laws but ignore Nuremberg rallies. https://t.co/JS2jcAj8qg

New Trump rule for press: When the president says something clearly false, the story isn't the lie he's saying but why he's lying.

END_OF_DOCUMENT_TOKEN_TO_BE_REPLACED

A small, delusional narcissist who can’t focus on the fact that he won the big prize but has to quibble over the implicit slights in his historic popular vote loss: 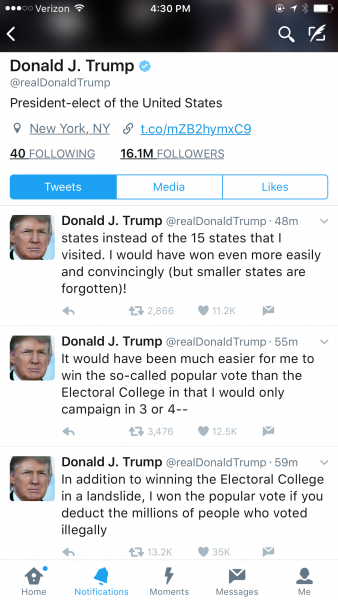 Never mind that alleging massive voter fraud hardly serves his cause — people are saying he was beaten by a girl! Outrage!

This is your president-elect, Trumpkins. You were taken in by a not-too-bright conman. That makes you an especially idiotic mark.

Had you only squandered your life sayings on a hard-sell shakedown disguised as a real estate course, it wouldn’t be any of my business, except perhaps as a concerned citizen who wants to shut down similar scams.

But with your vote, you made me and mine collateral damage to the con you signed up for, and second-class citizens into the bargain.

Wanted to “send a message,” did you? Well, message received, motherfucker: You don’t give a shit about this country that you’ve entrusted to a lunatic. Never dare to question my patriotism again.

So, he’s all yours, Trumpkins. Defend his petty vendettas at the cost of your soul. Or sack up and join the resistance.

END_OF_DOCUMENT_TOKEN_TO_BE_REPLACED

I don’t get excited too often when I read the news, but this piece got my blood pumping:

On Wednesday, she woke up inconsolable. On Thursday, angry. But on the Friday after the presidential election, as she prepared posters to join thousands in protesting Donald Trump’s victory, Mia Hernández came to a quiet realization: If she found her country’s direction intolerable, she would have to try to change it.

She would change it not just by signing petitions, or protesting, or calling her legislators. For the first time, she sketched out a plan to run for elected office.

In 2020, Hernández intends to make a bid for a seat on the San Jose City Council or the Santa Clara County Board of Supervisors. Her focus will be reproductive rights and community empowerment, she said.

“Everybody says organize, don’t mourn, make a change,” said Hernández, 22, a student at the University of California at Santa Cruz. “So I said to myself, ‘How am I going to be an active member in this? You know what, I need to run for office. I need to be a part of that decision-making. I need to make sure Trump’s voice is not the only voice out there.’ ”

Among young, liberal women who expected to see the country elect its first female president Nov. 8, Hernández is not alone; many are responding to Hillary Clinton’s defeat with a new sense of obligation to seek political power. After years of never imagining a career in the public eye or only vaguely entertaining the idea of working in politics, these women are determined to run for elected office.

1.) The local level is where people will feel the impact of positive governance most immediately. It actually has more of an impact on your daily lives than people realize.

2.) This can serve as the pipeline to higher office for candidates that Democrats desperately need. Republicans are always puking up bilious up an comers, and there seems to be no deep bench.

3.) The thing about organizing is it is exceptionally difficult when there is nothing to organize around. I started a grass roots group of fb for our area, got a lot of people in the group, we talked and talked, and then we did jack shit. Why? There were no candidates to support, no useful county organization, and so forth. Organization takes time and practice- they aren’t like a drag car that you run every now and then for 10 seconds at high speed, they much more resemble a diesel 18 wheeler that takes some time getting started and once you get the engine running performs best if it doesn’t stop.

Once you get some candidates around which you can organization, then the magic happens.