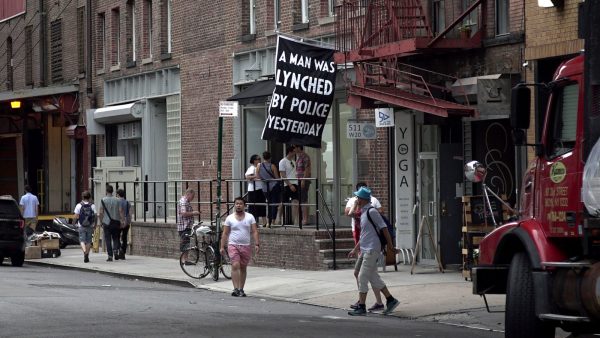 It’s 2016, but it might as well be 1816 in South Carolina if you are an unarmed black man and a white cop wants to kill you:

A judge declared a mistrial Monday afternoon in the fatal shooting of an unarmed black man at the hands of a South Carolina former patrolman, after the jury said they could not come to a unanimous verdict.

In a statement read by Circuit Judge Clifton Newman, the jury said “We as the jury regret to inform the court” that they were unable to come “to a unanimous decision in the case of the state versus Michael Slager” on Monday afternoon after a day of questions and deliberation.

“The court therefore must declare a mistrial in this case and I so declare that is case is mistried,” he said after the jury returned to the room and confirmed their decision.

The jury had remained undecided — but not deadlocked — on Monday in the murder trial.

The defense in ex-patrolman Michael Slager’s the five-week trial claimed that he feared for his life when 50-year-old Walter Scott got control of the officer’s stun gun and pointed it at him.

Here’s the video of him chasing Scott, stopping, taking up a shooting stance, and unloading his service weapon into the unarmed man running AWAY from him:

He must have been really “scared.”

It’s now official. You can be executed by the cops, on video, have the cop plant evidence on your still bleeding body, again, on video, have the cop be heard tittering about the adrenaline rush, on audio, and you will not receive justice. But let’s place the blame where it really lies- on Colin Kaepernick for not standing during the National Anthem.

My biggest fear in the next few years with the rise of the neo-nazis and the white supremacists and the normalization of the Trump racist right is that we are going to see this kind of thing, both the shooting and the white holdout on the jury, happening more and more often. Basically, jury nullification in any offense in which the black man is the victim and the aggressor is white. The justice system has never have been equitable for black people in America, but now that it is “acceptable” to be openly racist in public and not only that, get elected President and be appointed to his staff, we are going to see a lot more of this.

In the past, we could rely on the Federal government and the Justice Department to at least make an attempt to address these concerns. But with racist ass Jeff Sessions running the DOJ, it’s going to get worse. Not only will he and the DOJ not pursue these cases, but he will also be gutting the voting rights of minorities so they don’t even have any redress at the ballot box, and on top of that, he is an anti-marijuana zealot and will ramp up on the drug war. You’re all bright people and don’t need a refresher course on the disparate impact of the drug war on people of color.

This is a slowly unfolding disaster. I’m sick. The Klan doesn’t even need to wear robes in public anymore.