The important message from Trump this morning is he's aware of the tax rallies and it gnaws at him.

I did what was an almost an impossible thing to do for a Republican-easily won the Electoral College! Now Tax Returns are brought up again?

You can divert your motorcade, but not the public's attention. https://t.co/XpFNbZszoO

Notice too that he has been forced to disgorge the popular vote lie. Your protests worked. https://t.co/DhBqzjkK1Z

Someone should look into who paid for the small organized rallies yesterday. The election is over!

A reminder that Trump has held three campaign rallies since being sworn-in https://t.co/yH2ylS9vje

Those rallies around the country were bigger than your Inauguration. Happy Easter! https://t.co/16H4ODACNE

… In all, dozens of protests occurred throughout the country. The main march unfolded in the nation’s capital, where protesters gathered for a rally in front of the Capitol and then marched west along Pennsylvania Avenue. In South Florida, activists marched to Trump’s Mar-a-Lago resort, where the president is staying this weekend. Thousands more gathered at a large march in New York City, where activists, comedians and a state senator spoke. Many of the protests featured an inflatable chicken, a mascot of sorts for the march…

C.J. Ingram, a D.C. resident in her 50s who works in a funeral home, attended the march, her first protest during Trump’s presidency.

“I’m really mad because he made Barack Obama produce his birth certificate, and he’s not even producing his tax returns,” Ingram said. “Come on, really? What are you hiding?”…

The non-profit, Electronic Privacy Information Center filed suit in D.C. federal court Saturday over Trump’s tax returns, arguing there is a provision in IRS regulations that allows their release.

During the march in the District, the lineup of speakers included Sen. Ron Wyden (D-Ore.), Rep. Maxine Waters (D-Calif.) and Rep. Jamie B. Raskin (D-Md.) and others. The speakers derided the president, and called on him to act ethically and read the Constitution.

“Releasing your tax returns is lowest ethical bar for a president,” Wyden said. “And we’re going to make sure he clears that hurdle.”…

How many people turned out for the #TaxMarch in DC today? A LOT. pic.twitter.com/NJ8BxPeg8h

#TaxMarch crowd in NYC stretches for blocks as protesters make their way to Trump Tower pic.twitter.com/nAPFAWxgYb 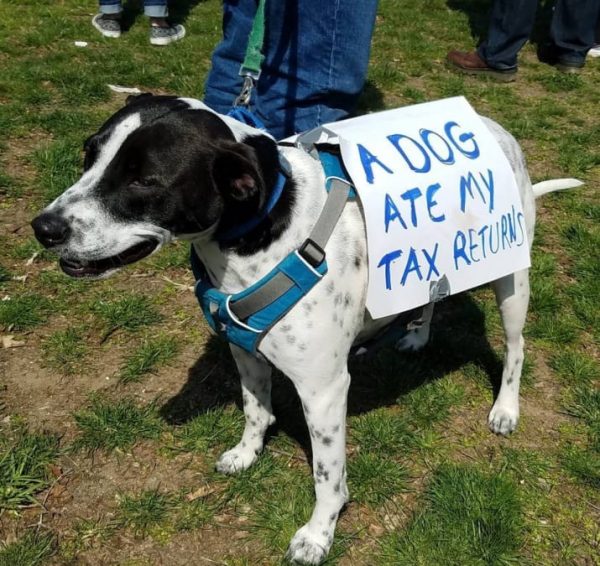