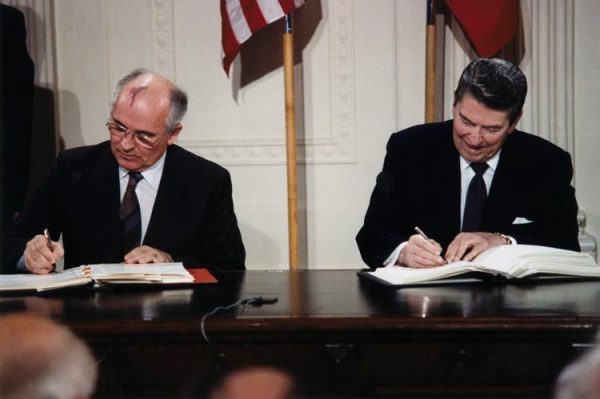 One of Donald Trump’s few consistencies has been his admiration of Vladimir Putin and his unwillingness to criticize Russia. Many of his other actions, like his refusal to explicitly support NATO’s Article 5, seem to be consistent with a Kremlin line.

The big question is why. From the information publicly available, this theme seems to have surfaced around the time of his trip to Russia in 1987. That was an interesting time for Russia, too.

Economic conditions were deteriorating in the Soviet Union. After a series of terminally ill First Secretaries, the Communist Party chose a lively young up-and-comer, Mikhail Gorbachev, in March 1985. In April 1986, one of the reactors at the Chernobyl power plant blew up, convincing Gorbachev that things needed to change, and quickly.

Like many of us, a New York real estate developer named Donald Trump was concerned about the nuclear arms race. Evidently he spoke about them to Roy Cohn, his mentor, who had been Senator Joseph McCarthy’s chief counsel. In 1984, Cohn encouraged Trump to use an interview with the Washington Post to bring up his belief that he could solve the nuclear weapons problem.

Lois Romano interviewed the 38-year-old Trump. The substance of the interview leads off with Trump’s nuclear negotiating ambitions but contains more information about Trump’s ego than any plan he may have had. Trump tells Romano

Later in the interview, he is said to be “talking nonstop about the threat of nuclear war,” but no specifics are given.

Fear of nuclear war was at its maximum in 1983 and 1984. NATO was responding to the Soviet military buildup with a buildup of its own – American Pershing missiles – and talks, which were going nowhere. But, on the other hand, Ronald Reagan said “A nuclear war cannot be won and must never be fought” in his 1984 State of the Union Address,

A few years pass, and Ron Rosenbaum interviews Trump on nuclear issues in 1987. By that time, Mikhail Gorbachev was in office, Chernobyl had blown up. President Ronald Reagan met with Gorbachev at Reykjavik in October 1986. Although the two came close to agreeing to outlaw nuclear weapons by 2000, the meeting was generally felt to have failed.

Trump visited Moscow in July 1987. He explored prospects for building a hotel with Intourist, the Soviet hotel and tourism agency. He was invited on that trip, perhaps all expenses paid, by Ambassador Yuri Dobrynin and Vitaly Churkin, who later became Russian Ambassador to the United Nations until his sudden death this year. Trump wanted to meet Gorbachev, but didn’t. No hotel deals came out of the meeting. He did manage to speak to Gorbachev at a State Department lunch in December.

In the three years between Trump interviews, Gorbachev introduced perestroika, restructuring, to improve the Soviet economy. Separatists in the Baltic Soviet Republics formed groups ostensibly to promote perestroika, but in fact those groups were political parties, outlawed in the Soviet Union. Demonstrations for environmental causes were beginning that were the basis for later, more political demonstrations and the breakup of the Soviet Union. The Intermediate Nuclear Forces (INF) Treaty removing those dangerous missiles from Europe would be signed on December 8.

It’s not clear when in 1987 Ron Rosenbaum interviewed Donald Trump. It would be helpful to know whether it was after Trump’s trip to Moscow or before he paid for full-page ads in major newspapers excoriating “Japan, Saudi Arabia, and others.”

The interview features the bullet points above and a few more themes that we see today:

Whereas Trump was vague about what aspect of nuclear weapons or war he felt he could address in the Romano interview, he was concerned about nuclear proliferation when he spoke with Rosenbaum.

Among the other nuclear problems, proliferation did not stand out. A large majority of countries had signed up to the Nuclear Nonproliferation Treaty, which Trump and Rosenbaum believed was coming apart. Brazil and Argentina had been in something of a nuclear arms race with each other, but they were beginning to cooperate in inspections. Trump mentions Libya, but a quick Google search shows no general concern about Libya’s getting nuclear weapons.

Trump also focuses on France as selling nuclear secrets. He offers no evidence for his suspicions. It is too secret to talk about, and he doesn’t want to give away his ideas.

This is the center of Trump’s deal:

It’s a deal with the Soviets. We approach them on this basis: We both recognize the nonproliferation treaty’s not working, that half a dozen countries are on the brink of getting a bomb. Which can only cause trouble for the two of us. The deterrence of mutual assured destruction that prevents the United States and the USSR from nuking each other won’t work on the level of an India-Pakistan nuclear exchange. Or a madman dictator with a briefcase-bomb team. The only answer is for the Big Two to make a deal now to step in and prevent the next generation of nations about to go nuclear from doing so. By whatever means necessary.

“Most of those [pre-nuclear] countries are in one form or another dominated by the U.S. and the Soviet Union,” Trump says. “Between those two nations you have the power to dominate any of those countries. So we should use our power of economic retaliation and they use their powers of retaliation and between the two of us we will prevent the problem from happening. It would have been better having done something five years ago,” he says. “But I believe even a country such as Pakistan would have to do something now. Five years from now they’ll laugh.”

With pressure from Rosenbaum, Trump admits that Pakistan might need something offered to them to end their nuclear program. But he also believes that wreaking economic havoc on them to the point where they would have riots in the streets would be desirable. Heavy economic pressure on the French as well.

Rosenbaum recognizes that the argument is poorly thought out, but he likes it. He brings no contemporary events, like the developing INF Treaty, into the discussion.

Neither reporter seems to have much knowledge of the contemporary status of nuclear issues or the USSR, although they knew that both would be part of their interview. Both are highly impressed by Trump’s ability to get a table in a restaurant.

Alexander Lebed, a fringe Russian presidential candidate at the time, drifts through a Trump interview with Mark Singer in 1997 with no substance revealed about Russia or nuclear weapons.

The Rosenbaum interview has been cited as indicating something about Trump’s thinking about nuclear weapons issues and Russia. Rosenbaum might check his notes to see if they contain any more substance than the interview does. I’ll go into more detail on what we might learn from the interviews in a following post.