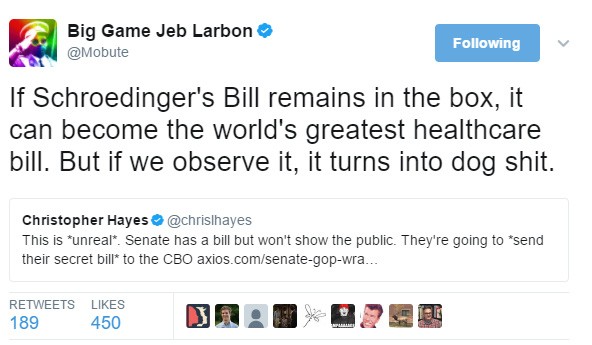 Senate Republicans are working to finish their draft health care bill, but have no plans to publicly release it, according to two senior Senate GOP aides.

“We aren’t stupid,” said one of the aides. One issue is that Senate Republicans plan to keep talking about it after the draft is done: “We are still in discussions about what will be in the final product so it is premature to release any draft absent further member conversations and consensus.”

Why it matters: Democratic senators are already slamming Republicans for the secrecy of their bill writing process, and this isn’t going to help. Republicans are sure to release the bill at some point, but it’s unclear when — and they want to vote on it in the next three weeks, before the July 4 recess.
What to watch

What to watch: When the bill is finished, it’ll be sent to the Congressional Budget Office. It’ll take CBO about two weeks to evaluate and score a draft bill. Senate Republicans then want to vote on the bill before the July 4th recess. The draft bill had been expected to be finished tonight, but aides say the timing has slipped.

This is just not how this is supposed to work, and there are so many things about this that it just leaves you wondering how fucking evil these people are. Obviously, there is the hypocrisy. We’re all old enough to remember all the way back to 2008-2011 with every Republican and all their tea party brownshits in tricorne hats screaming about Obama care being rammed down their throats, when it took several years, went through multiple committess, was scored incessantly, etc., ad nauseum, all right there out in the open. It was bullshit then, but it is the reality now.

Second, this is not how the legislative process is supposed to work. It would be arrogant and wrong to do something like that if you had a super majority of 66 Senators, but it would be nowhere near as breathtaking as what they are trying to do now. Not to mention, this will fundamentally break the Senate for years to come- this is the poison pill. There’s no coming back from this- centrism is dead, and we are working from different realities now. This is not only a declaration of war on the American people, but on the entire legislative process. If you think things are bad now, this is going to make things much worse.

Third, and probably most important, if you are working on a health care bill, it should not be controversial to note that your bill’s primary focus should focused on improving health care. I’ve seen no evidence to date that improving health care is even a quinary or senary concern. There’s repealing Obamacare. There’s getting a good CBO score. There’s freeing up money to hand it out to the rich. There’s appeasing your buddies in the insurance and pharmaceutical sectors. And there’s giving Trump a win.

But nothing about how this is going to make the country more healthy and productive, or help hold down our astronomical health care costs, (as we pay more in the world than ANYONE else and don’t even get results as good), or help stop medical bankruptcies, or help small businesses grow, or just give the fucking citizenry the peace of mind in knowing that if something goes wrong with their health they aren’t just fucking abandoned to die.

But another way this is going to kill people is through the impact this is going to have on mental health. Much was said about the Princeton study several months ago noting the large spike in the mortality rate for the white working class (and it goes without saying that any negative trend for white people is indubitably already in existence for minorities- whites are just “catching up,” if you will), and it appears the Republican response is “Hold my beer.”

This bill is going to devastate communities already saddled with an opiod epidemic, chronic joblessness and underemployment, a diabetes epidemic, food deserts, and more guns and mental health issues than you can even imagine. This will be like throwing TNT into a five alarm fire. It’s horrifying to think about.

All of these things are related. None of this shit happens in a vacuum. It’s like the old Chris Rock routine about “selling drugs.” You don’t have to sell drugs. Drugs sell themselves. The drug warriors have never ever figured out that drug addiction isn’t solely a product of a flawed character- people do drugs because they make them feel good. When your life is utter shit and you are living in a 30 year old doublewide that leaks, has torn plastic for windows, you haven’t had a job since the mine closed down and even then you couldn’t work because you have chronic back pain, a 12 pack of Milwaukee’s Best and a couple oxys if you can get ’em but you probably can ‘t afford ’em so why not shoot a little heroin. It can’t all be laced with fentanyl. And if it is, well, could death be worse than this?

Again, it’s just horrifying to think about. The mental stress from the financial aspects of this is going to feed into the pre-existing mess of mental health issues, drug addiction, alcoholism. It’s going to wreck families and marriages. It’s going to leave several generations of kids who grow up in this shit scarred for life and probably doomed to repeat it.

And all for a few more bucks for people who have so much money they don’t know what to do with it anyway. It makes me fucking sick, and it makes me livid. I’m punching the goddamned keyboard as I write this. Fucking evil motherfuckers.