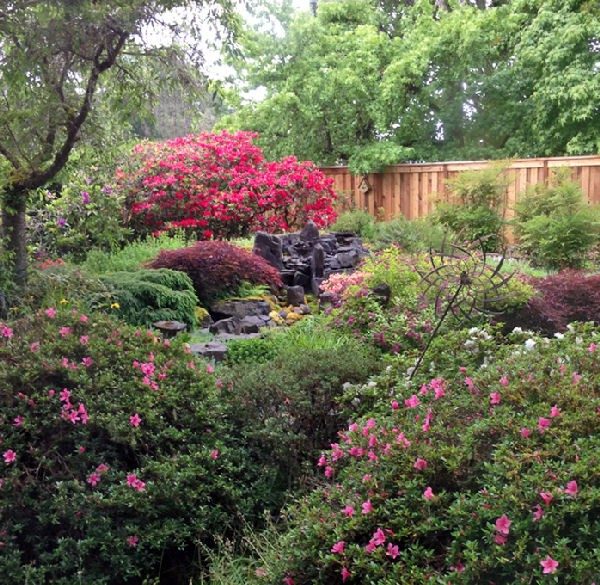 Hereabuts it’s all fits-n-starts, weatherwise. We had a modest warm-up last week, then yesterday, a bit of rain. This mild weather has apparently done wonders to the turf grass growth — the Willamette Valley is the Grass Seed Capitol of the World & I tell you what: lately it’s also the Grass Pollen Capitol of the world. The past several days have see pollen counts above 750 parts per cubic meter (200 ppcm is considered very high). 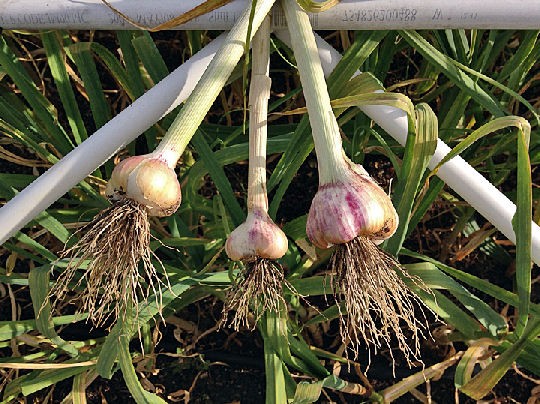 With rain in the forecast, I considered harvesting the garlic a week early (at this point, the bulbs can’t take any additional moisture), but since the stalks were still pretty green and unlikely to close/dry properly, we decided to re-cover the bed with 6-mil plastic and wait it out. 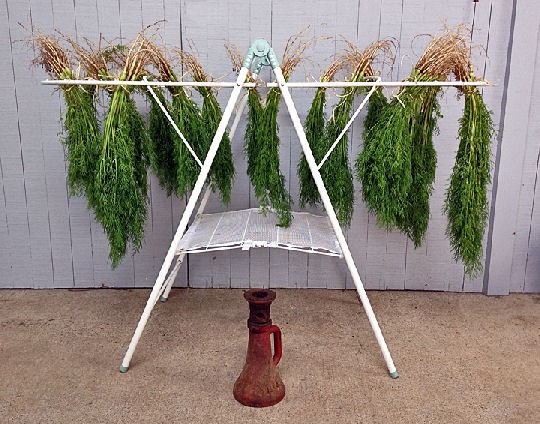 Last year I accidentally let some dill go to seed in one of the raised beds (I was holding out for one more run of pickle-making). This year, the baby dill grew up peacefully amongst the carrots & beets we planted several weeks ago. Since I didn’t want any extra moisture to complicated drying the feathery weed, I harvested it and set it to dry in the breezeway.

With all the pollen wafting about (even folks without allergies are sneezing & rubbing their poor watery eyes), it was nice to have a little rain to rinse things off yesterday. The ornamental garden [top pic] pretty much takes care of itself this time of year (thank goodness!), but it always appreciates a shower or two.

The Spousal Unit, goddess protect us both, is Taking an Interest in gardening this year. Our landscaping preferences tend to be pretty much orthogonal, but he spends more time in the side/back yard than I do, and once I gave up on achieving anything in that space beyond keeping the grass (weeds) mowed short enough the little dogs didn’t get lost, he decided to make his own improvements. Beyond the half-dozen tomato rootpouches he’s sure will get plenty of sun tucked in the shade between the roadside oak tree and our now-flourishing cherry, his fondness for creeping vinca (periwinkle) is threatening to become a mania. He’s also determined to nurse the ailing two-story rhododendron that was here when we bought the house back to health (even though my personal suspicion is that it’s not happy because we keep blasting its roots out of our main plumbing line) and has planted a couple of lilacs where ‘they’ll beautify the shed’ (block its only window).

So, after I finished planting out most of the remaining mail-order roses, we spent a chunk of the evening with me “supervising” (trying to quell a tension headache) as he “helped” finish the improvements on the flower bed next to our front door. I asked him to help me level the new self-watering pot I’d bought for a Souvenir du President Lincoln (where the 1950s construction fill in the bed isn’t deep enough on its own). He decided that this would be the perfect opportunity to move all the bravely flowering pansy planters and tear up a bunch of the existing perennials, so he could re-seat the rubber edging at the edge of the bed as it was supposed to be… not that you can see the edging, when the pansy planters are in place, and the geraniums / columbines are growing behind them…

But now all the planters (and the furschlugginer edging) are back in place, including the new Souvenir, and once I’ve scattered a couple giant (ow my aching back) bags of mulch, at least one bed will look (however briefly) more-or-less the way it does in my imagination. Win!