You are here: Home / Anderson On Health Insurance / Higher Silver Deductibles in 2018

Everyone should call the Senate right now regarding the AHCA with the ask that there is no coverage loss.

Okay, now that you’re back, let’s see what a rule change will do.

The Silver plans are supposed to be 70% Actuarial Value (AV). AV is the percentage of costs for the pool that the insurer covers. 70% AV means the insurer pays roughly 70% of the costs, and the people in the pool pay roughly 30% in cost sharing. There are lots of different ways to arrange the cost sharing but that is a detail. Under the Obama administration, there was a de minimas variation rule where a plan could be called Silver if it was between 68% and 72% AV. The Trump administration released a new rule that changed the allowed variation to a band from 66% to 72% AV.

The out of pocket maximums are likely to increase significantly in the highlighted Healthcare.gov counties below: 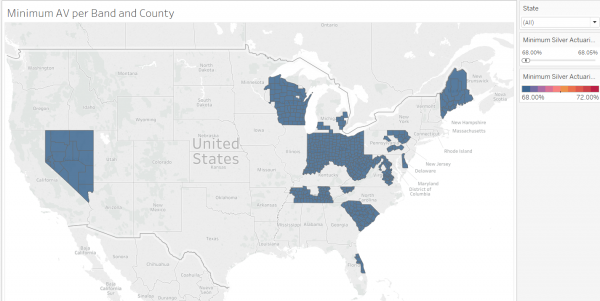 The highlighted counties have a Silver plan with a 2017 AV between 68% and 68.05%. I figure that companies are more likely to do what they were doing, reaching for the lowest possible AV if the rules are relaxed. Counties where the lowest AV was above 70% are, in my opinion, less likely to see their incumbent carriers race to the bottom as they already had not shown that proclivity. This is most of Oregon and significant chunks of Pennsylvania and Illinois with a few random counties elsewhere.

The distributional consequences are complex. Lower AV values, all else being equal, means lower premiums. The insurers pay less in claims. It is a good deal for the federal government as the premium of the benchmark Silver will either be constant or decrease so advanced premium tax credits will decline. It is a win for healthy people who are not subsidized as they weren’t going to hit the previous, lower out of pocket maximum anyways so they save 3% in premiums. It is a wash for people with Cost Sharing Reduction (CSR) subsidies as the CSR holds constant. It is a wash for subsidized buyers who don’t get CSR but who are healthy and were going to buy Silver anyways. It gets complex for those buyers who wanted to buy another metal band as county specific pricing variations will be altered. Bronze plans will be slightly more expensive and Gold/Platinum plans will be up in the air as to their relative price.

The worst off are the Silver buyers who are not receiving CSR assistance and who are likely to be sick. They are picking up more out of pocket. Non-subsidized buyers will get a slight improvement in lower premiums but all that plus more will go back out the door via higher cost sharing. Subsidized buyers won’t see the slight improvement in premiums. They will only see higher cost sharing.

Finally, the Tableau that I was using to play with this idea is below.

Previous Post: « Monday Morning Open Thread
Next Post: Medicaid is getting sliced even more in the Senate »