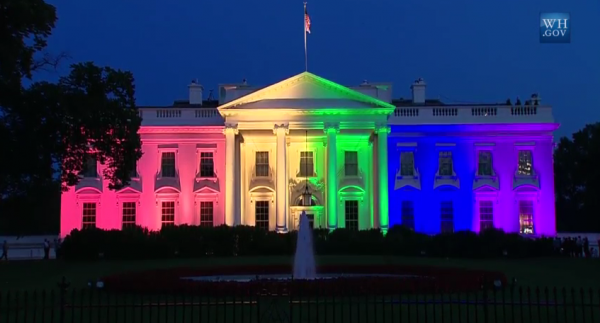 When I am most displeased with my country’s current trajectory, when I feel inclined to toss in the towel and move to a mythical Scandinavian country with a moderate climate that is willing to take in old crabby Americans with few marketable skills, when I despair of moving forward and feel ready to surrender to the forces of darkness, I remind myself of the remarkable progress we’ve made on gay rights, just during my lifetime.

We’ve still got a long way to go. The legal progress we’ve made is under attack, and prominent recipient of stolen goods (in)Justice Gorsuch shows eagerness to once again give force of law to the bigotry and intolerance that reigned for centuries.

But we’ve come a long way, baby. We’ve seen the White House lit up in rainbow colors to celebrate marriage equality as the law of the land. (Thank you, President Obama!) A new generation of young adults rightly believes that love is love.

It wasn’t that way when I came of age in the 80s, during the plague years. The president at that time wouldn’t speak the name of the disease that was killing my friends in their youth. Degenerate, money-grubbing preachers gained political ascendency by telling us AIDS was God’s judgment.

Closer to home during those dark times, I tried to be wing-woman to a beloved gay sister and had a ring-side seat to witness her struggles for acceptance within the family, and in the world. Through her bravery, and the bravery of millions of people who refused to accept second-class citizenship, refused to pretend to be someone other than who they are, the world changed.

A couple for nearly as long as myself and the mister, my sister and her spouse are now legally married, as of a few years back (I was allowed to marry when the Macarena was the hot new dance craze hereabouts). It’s a recurring joke between my sister and me: how easy it is for kids today, especially my gay kid, who never felt pressure — from her family, anyway — to hide her own beautiful self nor conform to someone else’s definition of “normal.”

I could write a “War and Peace”-length account of her struggles, a shame-filled treatise on my fuck-ups as a parent, an angry tirade on how schools and laws and institutions and society failed and still fail LGBTQ kids and adults. I in no way want to minimize the obstacles and injustices they face.

But yes, progress has been made, and Pride celebrations throughout the land have marked the occasion, even if the current clown in the White House and his beady-eyed, homophobic VP fail to do so. I recall the chant repeated in an ACT UP demonstration I attended so many years ago: “We’re here, we’re queer, we’re fabulous! Get used to it!”

And for the most part, America, to its credit, did get used to it. Not everyone. It’ll never be everyone. But enough of us to form a critical mass, I think. We’ll guard our progress and push it forward every day. But there’s plenty to be proud of, even in this shitty epoch. So, Happy Pride!