You are here: Home / Open Threads / You be the referee

I just saw this clip. It will be on multiple clinics over the next three years as it is a great clip for a few things.

In case you missed it: pic.twitter.com/AetsMQOyf6

What do you have?

I have immense respect for the referee.

The referee has a good goal and a lot of problems to sort out.

The first thing to notice is that the referee was slow on the whistle. I have at least three fouls. The first challenge as the ball was received was iffy. #8 got a bit of a push/shove and then #20 tried to wreck the attacker. Each time, the referee waited to see what was going to happen. #19 Green just kept on advancing at speed and under control. So each time the referee held the whistle. Beautiful refereeing.

Now the first two challenges are either sloppy or cynical play. #8 was getting beat so she reached out with her arms to push and hopefully disrupt the attack. That could be a yellow. At this level of play I don’t think it is, but I could see it without a problem.

Now #20 is the interesting one. She is the last defender in proximity, she is losing the foot race and she gets desperate as the attacker is moving directly onto goal with the ball at her feet and entering prime scoring territory. She makes an extremely dangerous tackle. The ball is pushed away from the attackers’ feet before the tackle was made so there is no fair challenge on the ball. The first leg sweeps the attacker’s rear leg sending her to the ground and the trail leg comes in very high and contributes to pushing the attacker down. 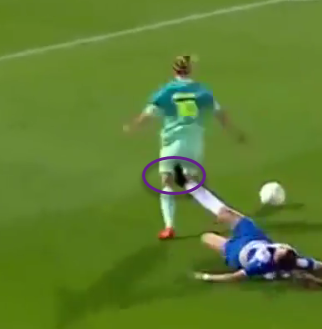 This is an atrocious tackle anywhere on the field. The attacker had no ability to defend herself and the combination of a low-high impact point means this is a potential leg breaker. I would be a little less mad if both of the defender’s legs impacted on a single side of the attacker instead of capturing her leg in one position.

Yet the attacker got up and continued her attack past a half-hearted defensive attempt in the box and put the ball in the corner for a good goal. There is never a situation where taking the ball out of the back of the net advantages the fouled attacker.

Now I hope the referee came back for #20. I have, in my mind, a Serious Foul Play red card. That is a tackle that should never be attempted anywhere on the field. I don’t have a Denying an Obvious Goal Scoring Opportunity red card as the opportunity was not denied. But if the referee misses the Serious Foul Play, then they only have a Caution for Unsporting Behavior to come back to.

I just wanted to highlight this clip as it is one of the most beautiful goals I’ve ever seen.