You are here: Home / Anderson On Health Insurance / The CBO and Super Silver Gapping

Kevin Drum asked for a blog post instead of a tweet storm regarding my argument that over the long run not paying the Cost Sharing Reduction (CSR) subsidies is a massive liberal policy win. So here it goes.

Under current law, there are two sets of subsidies. The first is Premium Tax Credits. These apply to eligible people making between 100% and 400% Federal Poverty Line (FPL). They are based on filling the gap between an individual’s personal contribution and the premium of the second least expensive Silver plan. The Premium Tax Credit is a fixed amount. If a person buys a plan with a lower premium than the benchmark Silver plan, the person pays less in premiums. If a person buys a more expensive plan than the benchmark Silver, they pay the incremental difference.

The second subsidy type is the CSR subsidies. These apply to people earning between 100% and 250% FPL. CSR is a value bump built on top of Silver plans to reduce the out of pocket maximum and increase actuarial value. Actuarial value is shorthand for the percentage of allowed costs the insurance company pays. These bumps are 94%, 87% and 73% for people earning up to 150% FPL, 200% FPL, and 250% FPL respectively.

The House sued the Obama Administration on whether or not the CSR payments were properly appropriated instead of just authorized but not funded. Currently, CSR is adjudicated to have not been properly appropriated as a mandatory entitlement. This issue is slowly working it way to the DC Circuit. The Trump Administration could drop the appeal and stop payments immediately. Insurers have been working to protect themselves from this possibility in 2018 by raising rates dramatically. This is the baseline of the story.

Yet it is an artificially inflated Silver plan. The benchmark is now at priced at 90% AV. What happens to buying decisions?

If we assume that the benchmark Silver has cousins at Platinum, Gold and Bronze where all of these plans have the same networks and same basic benefit design, the relative, post subsidy price order will look like the following: Platinum and Silver are roughly equal, Silver is more expensive than Gold by 15% and Silver is more expensive than Bronze by 40% or more. This is a significant inversion of the current scenario where Benchmark Silver has a price advantage over Bronze by a little bit, and is significantly under-priced compared to Gold and Platinum.

Most of the people who earn under 200% FPL will stay in their CSR enhanced Silver plans. They still get good to very good deals. Their behavior won’t change much. Some people, especially those who are healthy and earning between 150% and 200% FPL may shift their purchases from Silver plans to the less expensive but higher deductible Gold plans that still offer some decent protection.

The big changes in behavior are for people earning between 200% and 400% FPL. The Congressional Budget Office in their analysis of the effects of terminating CSR payments has a wonderful illustration of this enhanced Silver Gapping: 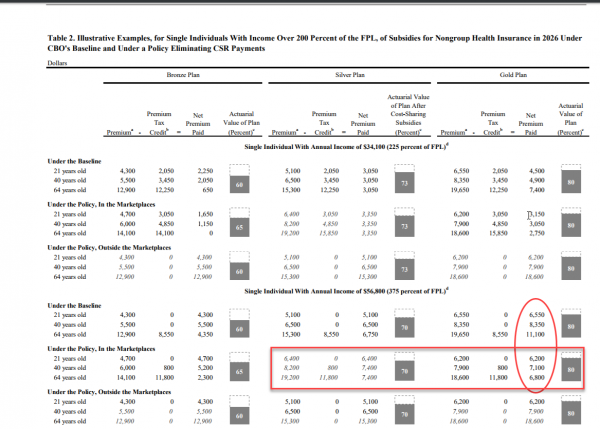 Gold becomes cheaper than Silver despite offering, all else being equal, a better value with lower out of pocket costs and lower deductibles. Subsidized Silver buyers who make more than 200% FPL will migrate overwhelmingly to Gold plans. This increases their average AV from roughly 70% to roughly 80% even as post-subsidy premiums decrease.

More importantly, Bronze plans are highly likely to be very low cost or free. This will increase purchases of these plans by people who are currently uninsured. The CBO projects an average of 300,000 additional covered lives per year because of this effect.

I don’t think this is cost effective way to cover more people. Expanding Medicaid and then expanding Basic Health Plans would be much more efficient.

What this does is anchor expectations of what “reasonable” publicly subsidized insurance looks like. Right now the benchmark plan for people making over 200% FPL is a plan that they are paying $140 or more for a plan with a $3,000 or more deductible. This is better than nothing but it is still under-insurance and not particularly helpful for people. In a Silver loaded CSR universe, the typical Gold plan will have lower premiums after the subsidy and a $1,000 deductible with a $1750 out of pocket maximum. That is truly useful insurance for far more people. And people will get used to this being the standard and we can work to improve from there.