I tend to hunker down at home on holidays so here’s a few from the dead oak out back.

If this doesn’t make you imagine captions, you’re a robot. 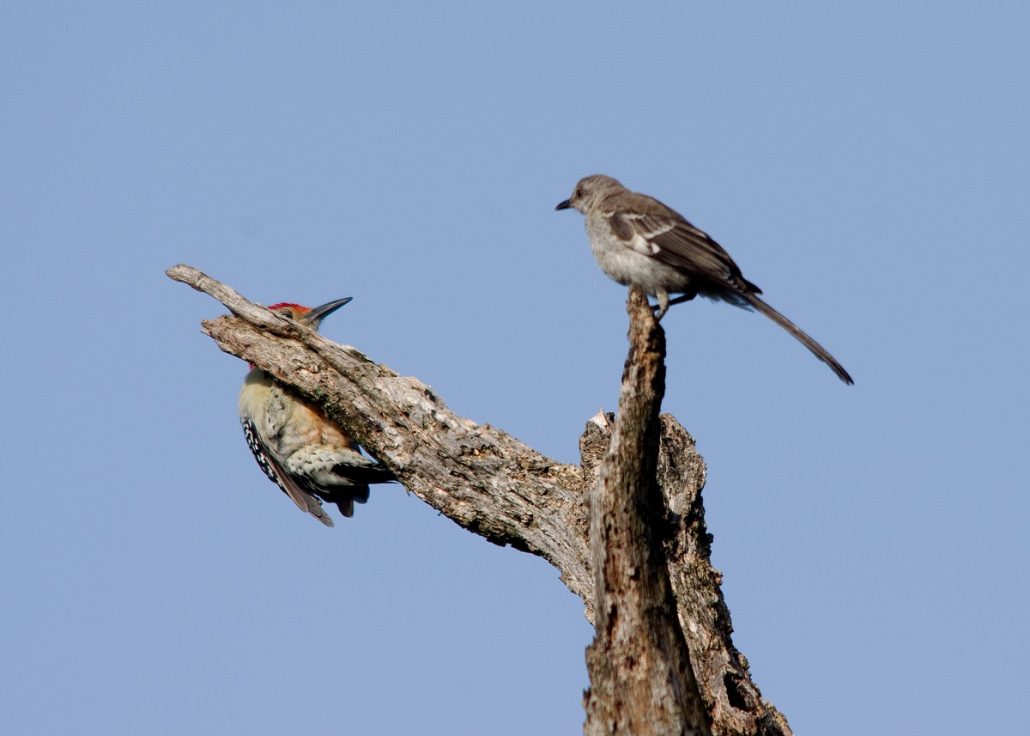 These flying dinosaurs, in their varied carriages, are just…so…damned….cool! Thank you so much for this.

The Spanish established a chain of 21 missions in California in the late 18th and early 19th century, stretching from San Diego to Sonoma. The mission properties were rather wealthy and included industrial operations, by some accounts owning 1/6 of Alta California. They were secularized after Mexican independence and fell into various states of disrepair. Many have been restored to their original(but smaller) state. They are now owned by the Catholic Church and are both museums and active churches.

I visited Mission San Juan Capistrano in the late 60’s as a child and wanted to revisit it; being that I didn’t want to fight traffic driving down to southern Orange County, I took AmTrak from Union Station to San Juan Capistrano. Mission San Juan Capistrano was the 7th mission established in 1776. It contains “Serra Chapel”, the only know building still standing that St. Junipero Serra celebrated mass and is the oldest building in the State of California. The mission also contains the ruins of “The Great Stone Church” that was built in the early 1800’s and was promptly destroyed in the 1812 7.5 magnitude San Juan Capistrano earthquake during morning mass with a loss of 42 lives. A basilica that was based upon the design of “The Great Stone Church” was built next to the mission in the 1980’s.

Fountain with “The Great Stone Church” in the background.

This is right at the entrance to the mission after you pass though the gift shop and they take your cash. Anyway, it’s a nice looking fountain. 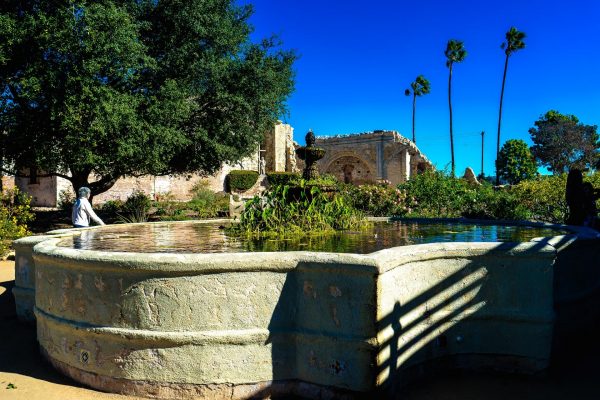 Ruins of “The Great Stone Church”

The characteristic that separates “The Great Stone Church” from other mission buildings(both at Mission San Juan Capistrano and all the other missions) is in it’s name. It was built using stone as opposed to adobe bricks. This is the view from what would have been the church doors with the bell tower to the right 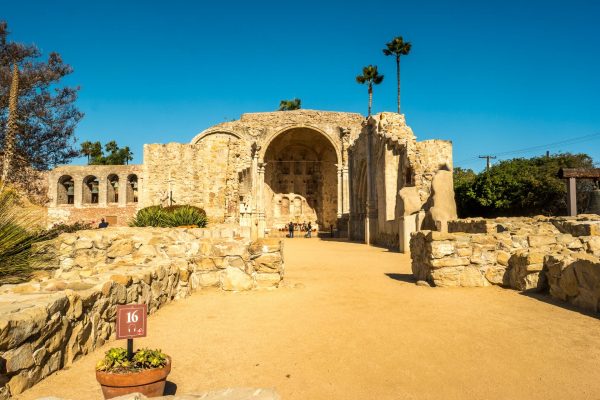 “The Great Stone Church” and the four-bell campanario in infrared.

At the right of the picture is the ruins of “The Great Stone Church” with the 4 bell campanario that was constructed after the stone church’s demise. On the left is the back of “Serra’s Chapel”. Behind the capanario is the sacred garden. 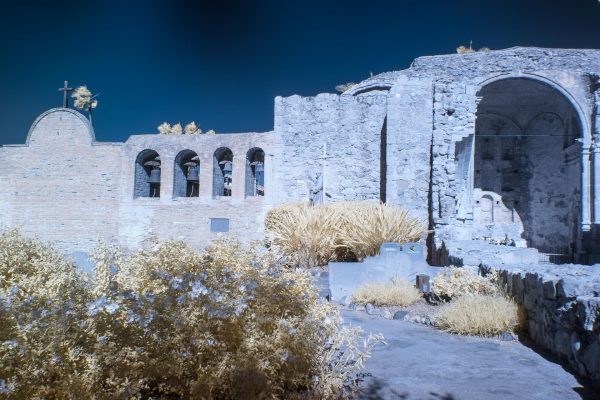 As noted in the general description, this is the oldest structure in California and the only place still standing that Saint Serra celebrated mass. 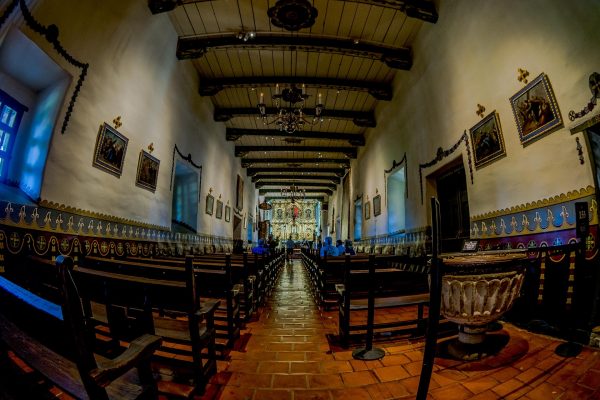 This is the main mission courtyard with Serra’s chapel at the right of the picture. 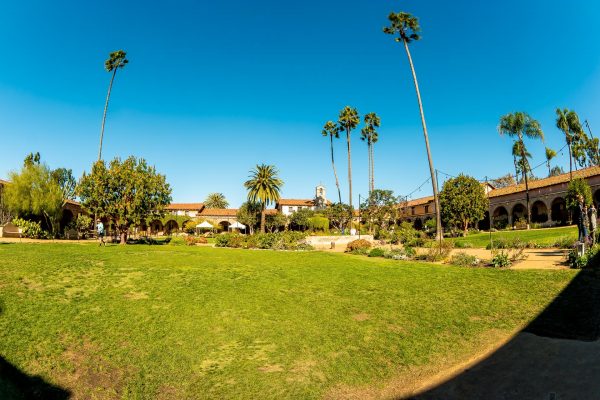 This is the same as the view as above, but a narrower field of view and in infrared. 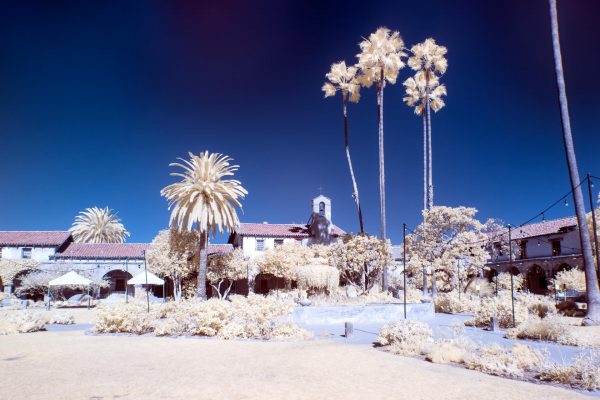 This is the interior of the basilica that was built in 1980’s. Comparing this to the pictures of “The Great Stone Church”, you can see the resemblance. 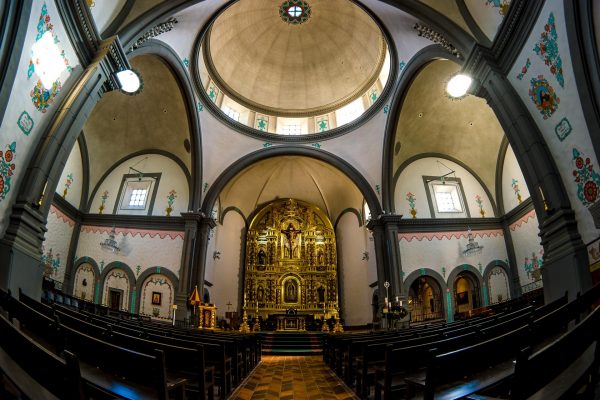